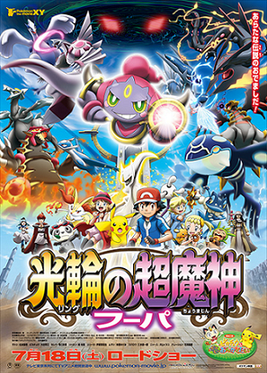 As we found out in my co-review of a Pokemon episode that I wrote along with The Tuesday Zone’s Alex Gladwin, I am a huge fan of Pokemon. Since I happened to be in Japan when a new Pokemon movie was coming out in theaters, it was clear to me that I had to be there when it premiered. That being said, this article is about the Japanese version, and not about the English translation which will eventually be released. The film, with its insanely long title of Pokemon the Movie XY: The Archdjinni of the Rings – Hoopa (or as it will be known in English, Pokemon the Movie: Hoopa and the Clash of Ages), is the franchise’s 18th film. The easiest way to describe this movie is as a marketing ploy (or at least more of one than most Pokemon media). Its advertisements made a big deal about how several legendary Pokemon (I counted 14, if you don’t count their multiple forms) would appear in the film as well as revolving around Pokemon’s newest addition to the legendary Pokemon cast, Hoopa. There were events and giveaways and tons of new merchandise based on the film. Even a teaser at the end of the film for a new Pokemon movie next year, was made to bring in more buyers into the Pokemon franchise, and has left many in the fandom curious about the strange new Pokemon that were “revealed”. Yet, I must admit, it was a marketing ploy that I knowingly and happily fell for, as I now have several exclusive-to-Japan Pokemon for my new Pokemon games, along with a Hoopa Pokemon card.  But before I get into more shameless nerd-bragging, let’s talk about the movie.

The basic plot revolves around the Pokemon, Hoopa, who has the ability to teleport anything – objects, people, Pokemon – through the rings on his body. One hundred years ago, Hoopa in its “unbound form” became a patron deity to a small desert town, and through teleporting money through its rings, the town became very wealthy. However, Hoopa liked to show off his power, and challenged many of the villagers to Pokemon battles. When this became too boring for Hoopa, he started teleporting legendary Pokemon through his rings to battle. These battles laid waste to the town until a man with the power of Arceus (essentially the “God Pokemon”) sealed Hoopa’s power and evil away in a “Prison Bottle”. This caused Hoopa to revert into a much smaller and less powerful “confined” form. For 100 years Hoopa stayed under the guardianship of the man’s family and formed a close relationship with his great-grandchildren, Mary and Barza. In the present day, in the now very large city, called Desert City (yes, that’s its actual name) Hoopa, Mary, and Barza meet our heroes, Ash and company, and they all become friends.  That is until, of course Team Rocket comes and messes things up as they usually do by breaking the Prison Bottle and releasing Hoopa’s evil side.

What follows for most of the rest of the film is an epic battle as Hoopa’s confined form and Hoopa’s unbound form (now somehow separate due to Mary and Barza’s Arceus-magic) summon many legendary Pokemon through their rings, while his guardians attempt to create a new Prison Bottle. If all of this sounds like a contrived mess just to show a crazy half hour battle between a bunch of legendaries, then that’s because that is what it is. I know that Pokemon stands for “Pocket Monster”, but much of the movie had a godzilla-esque monster movie vibe.  The battle took place in the skyscraper filled Desert City, with these giant legendary monsters rampaging around and wrecking the place. Pokemon is for kids and the story explained that the people of the city were evacuated to safety, but there had to be a body count here. This movie was certainly a far cry from the much more slow paced first movie that made most of us tear up when Ash was turned to stone. Though like the first movie, this one likewise pulled a Deus ex Machina, or shall we say Arceus ex Machina, when the literal God of Pokemon, Arceus, came to help out at the end.

OLM, inc.; Toho Company Ltd.
Behold his godly cosmic powers! (I don’t know about you, but I’d rather praise the helix)

I am largely trashing this movie, but that certainly doesn’t mean I didn’t enjoy it. The sheer being in a theater in Japan watching a movie of a show from my childhood truly made me feel like a kid again. I was probably grinning like an idiot half the time, just because I was reveling in the fact that I was there. There were also little things that I actually appreciated animation-wise. It being the 18th movie in the franchise, the art was certainly a lot smoother and more spectacular than the first ones. I also noticed that Desert City was based off of Dubai, with the world’s largest skyscraper, the Burj Khalifa, a clear inspiration for part of the city’s skyline. Not only that, but Hoopa’s confined form was voiced by one of my favorite Japanese voice actors, Rie Kugimiya. She is a very diverse voice actress who has voiced, among others, Alphonse Elric from Fullmetal Alchemist, Happy from Fairy Tail, and so many icy-on-the-outside-warm-on-the-inside female characters in anime that she has come to be known as the “Queen of Tsundere.” I wasn’t aware that she was part of the cast until I was watching the film, so when I heard Hoopa’s voice, I was delighted.

Unless you are a fan of Pokemon or anime, like myself, I doubt you’ll have any interest in watching this film. I am actually not sure if I would recommend this movie to even Pokemon fans. It is mostly just mindless action, and isn’t as emotionally involved as most other Pokemon films, which tend to be a lot deeper and darker than the show itself. I probably only enjoyed watching it as much as I did because I was watching it in the country of its creation. But if you are interested in seeing a nicely animated action sequence with legendary Pokemon, happen to be a fan of Rie Kugimiya, or want to go on a nostalgic trip, then give it a watch. If not, you aren’t really missing much. 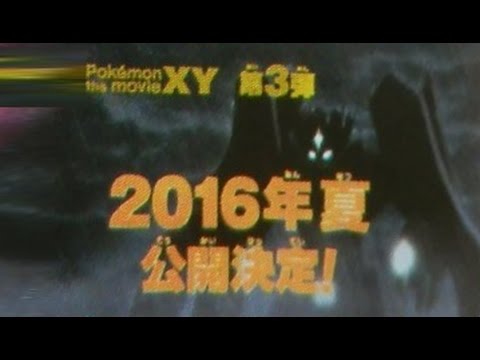