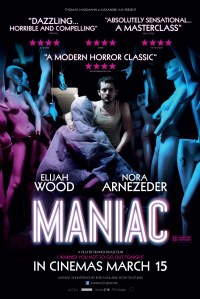 It’s always interesting to discover little tidbits about some of the actors in Hollywood. For example, Elijah Wood loves horror movies so much he made his own production company, SpectreVision (formally The Woodshed). We know them best at Rooster Illusion for A Girl Walks Home Alone At Night, the kickoff post for Thrillhers. But, Wood also stars in Maniac, a movie about a man with uncontrollable urges and a fondness for mannequins.

The film’s main gimmick appears to be that we are Elijah Wood. The movie is filmed through his eyes, and effectively at that, featuring some very nifty camerawork. There isn’t really an attempt to hide him or anything – very early we see photos, reflections, etc. This vantage makes for a great little opener, where the viewer is jarred very suddenly from ‘casual onlooker’ to ‘active participant’ as we realize the view is the villain’s, not just an omnipotent camera, as he utters his first lines.

Maniac is sadly team-too-much. I once made a horror film in high school (for a film class), and it was called “Phantasm”. It was about kids who got dared to play Ouija at night in the high school only to discover that there was a maniac living inside the walls. He systematically collected them to be his friends – the culprit, of course, being mommy issues. The movie was ridiculous and amazing and underdeveloped because we were 16. I directed and died first, times were good. Maniac feels a little like “Phantasm”. It seems like a theme was selected (mannequins) and then the film grew around it, and not for the better.

Frank (Elijah Wood) runs his family’s business restoring mannequins. His mother was a slut, and that messed him up. Now he scalps women and his mind creates sentient mannequins based on these women. Eventually he meets Anna, who’s photography focuses on mannequins, but he’s obviously unable to court her. The entire situation is implausible at best, ridiculous at worst. It has the elements of a kitsch slasher flick without the commitment. Wood, to his credit, is believably unsettling.

Every other character in the movie is the worst human being you’ve ever met (minus Anna) so it’s either intended to be a caricature, or they’re all just genuinely badly written. The women are over-sexualized and lacking in morals but for no apparent reason – none of the attacks are sexual, but the women wear like, tutus and knee-socks, heels and short shorts, etc. They’re also all idiots, but that’s at least typical of a slasher flick. One of the murders is a staunch reminder of why online dating is such a process – I carry mace and a small blade, make safe calls and let someone know where I’m going, only meet in public places for the first few dates, etc.

Frank’s wardrobe, conversely, is covered in turtlenecks and several coats. It’s probably intended to be contrast, but the turtlenecks are such a heavy handed wardrobe decision that it isn’t effective. The music is 80’s (see: It Follows) and wonderful, but under-utilized.

Maniac is an entertaining film  with some shocking/creative murders, so if you’re interested in kind of a flashy slasher flick it’s worth your time. I think my expectations were a little high, but I wasn’t able to sink into the concept as much as I usually can. This is also a French remake of a 1980 British slasher flick of the same name, which I’ll probably review next week.