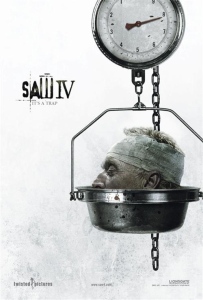 Lesson – Excess is the plague of the human condition.

Check out the first three movies here – join me in my own suffering.

As I plunged headlong into the fourth Saw movie, I had an awakening. An epiphany – a revelation.

Saw has re-invented story telling. It happened by accident, or perhaps by necessity, but it happened. At some point, the franchise stopped being about a murderous psychopath and became an intricate art piece in which the murders are the story.

Still yet another Saw movie directed by Bousman. You’d think he’d learn by now, but no. This film also opens with Jigsaw actually being dead this time (talk about your wasted reveals, by the way). Also, speaking of penises – peni? – penises, we get to see Jigsaw’s. Yay…? Hell of an opening. I think his autopsy is supposed to be humbling, like, this corpse shell of a man once did horrific things, but it’s more just a cheesy way to show off some excellent prop work.

You might be thinking, ‘Hey wait, Jigsaw is dead, and Amanda is dead, and like, there’s no new villain, so…what?’ but guess what? Jigsaw is meticulous (apparently) and managed to set up a bunch of murders with help from his accomplice for one of our new-ish detectives to go through. He pre-recorded a bunch of tapes for him to follow and /yawn honestly this is a boring installment. The murders are meh, the plot is meh, it has a lot of new characters that we have no investment in and there’s not really a discernible ‘twist’ or anything exciting. For those keeping track, we are also on detective #4. The other ones keep dying, which is super rude. 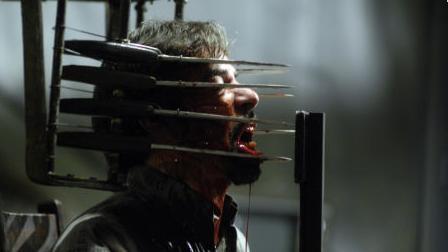 Darren Lynn Bousman finally gives up the ghost and passes the torch along to David Hackl, who has actually done production design for a lot of Bousman’s films including Repo! and the other Saw movies. To his extreme credit – the fifth film starts with one of the most disgusting deaths I’ve ever seen on film.

What we’re treated to after that is another convoluted attempt to keep Jigsaw alive through flashbacks. To be absolutely clear – we are now on our second film where the main villain is DEAD and they’ve conjured another hackneyed accomplice to carry out his last wishes. TWO. WHOLE. MOVIES. Worse, there are two more movies left in the franchise. We’ve had two entire movies literally just full of exposition. It’s like prequels, but less plot. 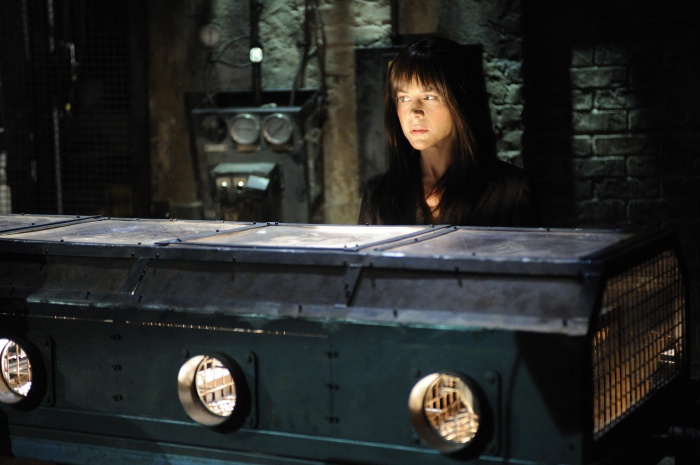 The worst part is I kind of enjoyed this movie. It’s easily one of the less painful to watch, because it features an engaging group murder-test and despite all of the ‘duh duh DUHHHHHHH’ mingled with the police inside-job plot, it’s not unbearable. My biggest complaint is that the guy working with Jigsaw and the guy working to find the first guy look super similar and I can’t tell them apart long enough to cheer for one and boo for the other.

The last two Saw films are handed over to editor Kevin Greutert, who worked on some of the early films as well as a few other movies with Bousman. So basically as some point Bousman was like, “Hey, do you want to direct the next Saw movie, because I am SUPER DONE.” and his buddies were like, “Yeah, why not? I’ve always wanted to direct a movie.” To his credit, having worked on/edited the other movies seems to have resulted in a consistent style, so that’s good. 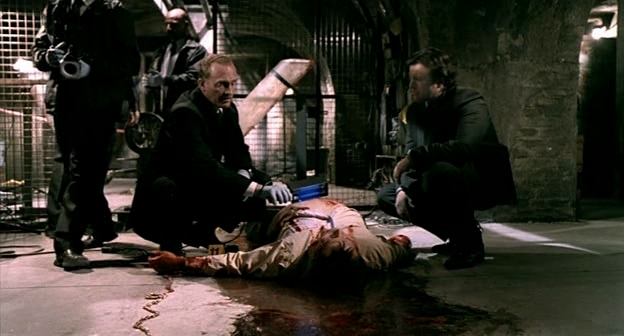 If it’s any consolation (it’s barely a consolation), Detective Hoffman, who we last saw cheerily departing a puzzle room in a coffin full of glass, is now left to carry on Jigsaw’s legacy. This seems like a good time to address that I don’t get why he has so many disciples. The idea is that these are all people who ‘need’ the validation and/or get so twisted by their experiences that they can’t help but take up the mantle, I guess?

Also, haha, just kidding, it’s totally still Jigsaw. He pre-made a TON of tapes, apparently, and has spent three movies killing people posthumously now, albeit through the lens of other people he’s recruited. It does try and fix some weirdness and plot holes from the third movie (yeah, three movies ago), which is kind of…nice? I guess?

I…I made it. To the last one. To the final Saw movie. I can’t believe it.

It’s worth noting I sadly lack the capacity to see this installation in it’s intended glorious 3D format. Believe me, I am also disappointed. Shockingly (amazingly), this movie actually opens with Cary Elwes, doing a slow, footless death-crawl out of the room from the first movie trying to escape the room and cauterizing his wound on a steam pipe.

This is the first movie that looks like it may have advanced in time to the 2000’s. It opens with a public execution, which is both amazing and newfangled, by way of bulletproof glass room in a town square-situation. Naturally, few people choose to help, and most choose to gawk. It’s pretty contrived for a Jigsaw killing, featuring a love triangle but also the most interesting dialogue during a death scene in most of the Saw movies. 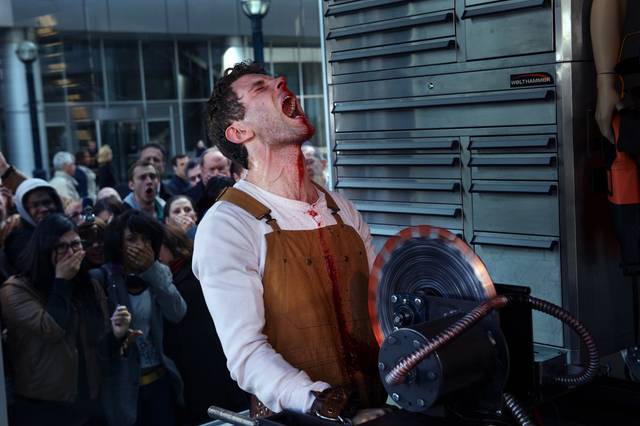 If you weren’t paying attention in the last movie, Detective Hoffman escapes death via Jill (Jigsaw’s ex) but she’s supposed to kill him, so she goes to the police. While this is going down, we get to spend time with some of the Jigsaw survivors, including some new people. Also some neo-nazis are dying (playing the ‘game’) all the while.

I hate to admit this – but Saw 3D is the best film in the franchise. In many ways, it accomplishes exactly what I wanted to happen in the previous six – it features prominent and dramatic ‘games’, generally bad people getting their comeuppance, a believable revenge plot, a fantastic little twist and, gasp, different kinds of horror/violence that aren’t torture traps.

Skip immediately to Saw 3D. Also I hate myself a little bit.