In an era where big budget superhero films dominate the box office, it’s easy to forget that “comic book movie” was once a dirty phrase in Hollywood. Even 10 years ago, silver screen supeheroics were considered a risky investment before Nolan and Whedon used them to shatter records. Capes on Camera is a look at those rare comic book movies of years past. Some are hidden gems, some noble failures, and other best relegated to the quarter bin of history.

With scant days until the release of the first season of Netflix’s new Daredevil show, it seemed like an ideal time for those of us ’round the superhero movie parts of the Internet to take another look at Marvel’s last attempt at bringing the Man Without Fear to a larger audience. Released in 2003 fresh of the heels of X-Men and Spider-Man, Daredevil  was a box office success despite mixed reviews and fan reception. But while X-Men and Spider-Man (and their superior sequels) still factor in to the modern superhero film conversation, Daredevil became the ugly stepchild of the already frequently homely early 2000s superhero films. Twelve years after its release, Daredevil is an often painfully dated film with a few ambitious ideas.

Daredevil‘s failings don’t stem from lack of effort. The actors, many of whom vigorously studied the comics in preparation for their roles, try to keep things true to their comic counterparts as possible. The script is laden with easter eggs paying their respects to various eras and writers, three of whom– Frank Miller, Kevin Smith, and obviously Stan Lee– make cameos in the film. Writer and director Mark Steven Johnson has memorized the beat, and oftentimes the comic panels, in his attempt to translate the character to the screen. For the shakiness of early-2000s CGI, the film’s portrayal of Daredevil’s radar senses are well realized. A chaotic array of overlaid images and sounds in the aftermath of Matt Murdock’s fateful blinding by radioactive ooze, the indigo cgi-world Matt “sees” becomes more detailed as the character ages and puts his skills to use. As a fan of the character, it’s nice to see attention minded to a tricky power to represent and the care with which they adapt the source. The problem, however, is that the film tries to do too much in this respect.

Daredevil is an origin story, a gritty neo-noir, a romance, and a lighthearted action film at once and excels at none. Brutally violent fights with Hell’s Kitchen lowlifes sit conspicuously next to the meet-cute play-fighting between Matt Murdock and Elektra (Jennifer Garner) and the black humor of [the inexplicably Irish, sadly costumeless] Bullseye (Collin Farrell) killing a chatty grandma with a peanut on an airplane. It’s a similar mixing of genres and jokes that have made the modern Marvel Studio films successful– Captain America: The Winter Soldier as superhero conspiracy thriller, Guardians of the Galaxy as comedy space opera– but which ultimately weigh Daredevil down. The film pulls in several directions at once, and by the time it decides to place its chips on the romance and noir, feels unfocused. The criminal activity of the supremely intimidating Kingpin (Michael Clarke Duncan) feel disconnected from the doomed romance between Daredevil and Elektra, even when Kingpin is ordering Elektra’s death. Making matters stranger is Collin Farrell’s heightened Bullseye performance, crazying things up as a manic sociopath assassin who at all times feels like a Boondocks Saints villain who got lost in the wrong film. They’re interesting elements on their own that, given the right mix, could have been something neat. And that’s not even taking into account the entire subplot featuring Coolio that was cut.*

“Wait, I was told this was a musical.” “This is clearly an inspirational sports movie.”

What struck me about the film, more than anything else, is how dated Daredevil felt. X-Men and Spider-Man definitely reflect the era in which they were made to some degree, but few superhero films announce “made in 2002” quite as loudly as Daredevil.  From its over-reliance on Matrix-style slo-mo and ramping effects to a dramatic training sequence featuring the music of Evanescence to, most painfully, Foggy Nelson (Jon Favreau) using the phrase “in the hizzle”, Daredevil is one “and featuring special guest Snoop Dogg” from being the most 2003 film ever made. It’s hard to say at current time how the modern slate of superhero films are going to hold up years down the line (Kat Dennings role in the Thor movies felt dated the moment they hit the screen), but Daredevil is a good argument in favor of the near-future tech of the Nolan Batman movies and the period piece trappings of superhero films like The Rocketeer and The Phantom. It’s also a pretty good argument against heavily featuring contemporary bands on your soundtrack** 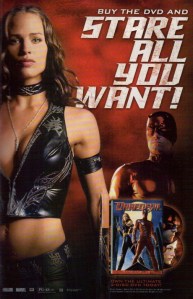 And the greatest argument against having this as your print ad campaign. Stay classy, 2003.

Affleck and Garner’s occasionally wooden performances and the red leather costume that suggests that Matt Murdock’s real superpower is somehow never chafing have been much ballyhooed by other nerds on the internet before me, but neither of these really seem like the real issue at the heart of Daredevil. Daredevil suffers from not knowing what it wants to be until late in the game, and then going after those things with little conviction. Daredevil is perhaps one of Marvel’s most psychologically compelling characters and has inspired some of Marvel’s best comics, be it the martial arts-tinged crime thrillers of Frank Miller, the grim two-fisted pulp of Brian Michael Bendis or the perennially excellent emotionally mature swashbuckling of Mark Waid’s current run (read it), and Daredevil tasks itself with trying to represent all of these interpretations overreaches in the process. As I gear up to marathon the Netflix release of the new Daredevil series, I look forward to seeing how the showrunner and writers handle the character and what lessons were learned from its 2003 predecessor.

Nerd nitpick: While the film sticks close to the comic origin as written in ’63, I was sad to see the incident that blinded Matt Murdock altered. The version on film makes sense in context, but removes the heroic act of saving an old blind man from being hit by the fateful truck of radioactive chemicals, a heroic act that to me feels integral to the character of the hero.

*scenes that were added in for the eventual “Director’s cut” release of the film, which I didn’t watch because I didn’t own a copy of it that I got in 5th grade like I did the theatrical version.

**Prince’s soundtrack to Batman being the obvious exception here.