In an era where big budget superhero films dominate the box office, it’s easy to forget that “comic book adaptation” was once a dirty phrase in Hollywood. Even 10 years ago, silver screen supeheroics were considered a risky investment before Nolan and Whedon used them to shatter records. Capes on Camera is a look at those rare comic book movies of years past. Some are hidden gems, some noble failures, and other best relegated to the quarter bin of history.

When a five-year-old Bomb in the Lasagna saw The Phantom, it was probably the best movie in the entire world. At least what I remembered of it. The purple-clad adventurer with a cool jungle cave lair and a final magic laser skull duel with the bad guy would rattle around in my imagination for years afterward, bolstered by VHS rentals and snippets caught on cable TV airings. My first time seeking out the film as an adult, the flaws of the film stood out like the aforementioned purple body suit against the greenery of the jungle. Revisiting the film again for Capes on Camera, these flaws (and a few others) still stand out, but so did the elements that captured my imagination so many years ago. For its many flaws, The Phantom is a noble attempt at the superhero film.

Much like my last entry in this series, The Rocketeer, The Phantom hedges its bets on period adventure and the serial sensibilities of films like Indiana Jones and Batman. Created as a newspaper strip by Lee Falk in 1936, The Phantom actually predates the superhero comic book, and is often credited with creating the pupil-less domino mask look that would become a staple of superhero costume design with characters like Robin and the Green Lantern. The Phantom adheres to honoring the characters classic comic strip origins, emulating the style of a 40s film serial, right down to the “for those who came in late” banner at the beginning of the film and the recap of the characters origins: a 16th century merchant is attacked by pirates of the Sengh Brotherhood, and the captain’s son jumps overboard and washes up on the shore of the African (or South Asian, it seems to switch) nation of Bengalla. The Bengallan people take the boy in and give him a magic skull ring because that’s an awesome gift for a kid. The child grows up to become the Phantom, a hero dedicated to fighting piracy and evil, especially the exceptionally evil pirates of the Sengh Brotherhood, passing the mantle onto succeeding generations, thus maintaining the image of an immortal hero.

The Phantom exceeds at world building. The film provides just enough details about the mystic aritfiacts and the line of Phantoms to hook the viewer while hinting at more than what’s being revealed. The writer has delved back into years of mythos and put the best elements into the film. Here there be magic totems, roving squads of all-female criminal air squadron, and pirates who still dress in 16th century garb well into the 1930s. The production team commit to sincerely bringing the character from screen to page, embracing the comic strip mythos and the bright purple costume without irony.

Much of the credit for ably bringing the Phantom believably to life on screen is Billy Zane’s performance. Zane, who trained for a year for the performance, plays the role with enthusiasm. The Phantom’s Kit Walker, at least as played by Zane, is not a particularly tortured hero. Zane’s Phantom is an affable, at times idiosyncratic action hero. Immensely capable as hero, he’s self-effacing at the film’s lighter moments, particularly as he explains his lair and mythology to his rekindled college flame Diana Palmer (Kristy Swanson). Often when actors play a hero with this kind of light-hearted smirking, it comes off as smug, but Zane isn’t acting like he is above the role. The Phantom feels the responsibility of the twenty Phantoms before him, but he also clearly enjoys being a hero. The scenes where he interacts with the ghost (or memory, it’s not clear) of his father and former Phantom (played veteran British actor Patrick McGoohan) capture that balance of heroic responsibility and lighthearted romantic adventurism well. It’s allegedly this role that got him cast in Titanic, and I wish it had led to more for Zane, as its his performance that has endeared me forever to the character and the actor. 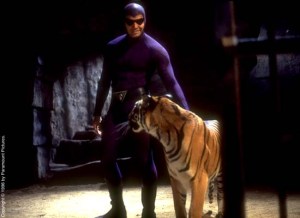 9 out of 10 tigers agree this guy is just the best.

I just wish the character and mythos were served better by the plot. Similarly to The Rocketeer, the main issue is that a lot of what the plot does has been done better in other films prior and afterwards. Writer Jeffrey Boam, who wrote the script for Indiana Jones and the Last Crusade, reaches into that same bag of Indiana Jones tricks for this film, to very familiar results. Large swaths of the film feel like carbon copy of the larger franchise. The film opens with a Raiders booby-trapped jungle temple, goes to our hero climbing on and into a moving truck, and culminates in a Temple of Doom rope bridge collapse. Watching as a kid who hadn’t yet experienced the Indiana Jones franchise, these moments felt fresh where they now seem like a rehash. And the film’s treasure hunting, artifacts of unbelievable power conceit don’t exactly do much to raise this from Jones’ shadow. The few original action pieces—such as a horseback chase through the streets of New York into Central Park and the incomparable laser skull fight—are pretty fun, if a little far between.

The supporting cast doesn’t help much either. Diana Palmer is a feisty, independent woman, except for when the script tells her she isn’t. Catherine Zeta Jones’ femme fatale pilot is a strong presence in the beginning of the film, before she’s abruptly defanged halfway through, and just kind of hangs around afterwards, joining with the good guys for unclear reasons. Treat Williams as evil industrialist Xander Drax is- ah Treat Williams. Guys, let me tell you something, I can’t tell if Williams’ performance is great or terrible. Feeling more like a passive-aggressive, obsequiously nice “cool boss” than evil industrialist, he is a weird choice as central villain. But there’s also something just so wonderful to watching him talk to pirates like clients in a business meeting, or watching him impale a man with a spear or trick a librarian into stabbing his eyes with spring-loaded knives in a microscope without breaking his bright demeanor feels at once wholly inappropriate and perfect for this movie. Life is full of contradictions. 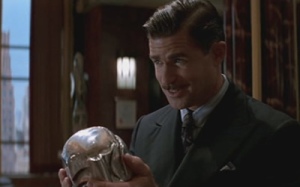 “And laser skulls. Those too.”

Unfortunately, adapting the 30s comic mythos also means they embrace the unfortunate imperialism and yellow peril of the original strips, which negatively date the film. The British controlled Bengalla is populated with stock character natives, the Phantom is aided by a reverent indigenous man-servant, and the Sengh Brotherhood, overseen by its fu-manchu adorned leader stick out as reminders of the ugly racial stereotypes of many early comics and pulps. It’s stuff that’s tied to the characters origins, but it serves to dilute the excellent world building just enough to be an issue.

Ultimately, The Phantom is a marginal movie with a dynamic center. The elements that work shine through, yet, its problems stop the film from reaching their full potential. That being said, the film makes a solid case for the often-overlooked comic strip hero and his universe. With a fresh take, an attempt to reconcile the ugly racial politics of the character origins, and hopefully the involvement of Zane, the film series, much like the undying character, could be due for a surprise return.

Nerd fact: In some versions of the story, the Phantom’s real last name is Standish, a fact that obviously brings me no end of joy.

2 thoughts on “Capes on Camera: “The Phantom””