On March 18th, Daredevil returns for the second season of its Netflix show. Joining the Man Without Fear and company as season 2’s primary adversary is Marvel’s favorite, skull shirt-clad antihero The Punisher. Created by writer Gerry Conway and artist John Romita Sr. in the pages of Amazing Spider-Man #129 in 1974, The Punisher was Marvel’s reflection of the gun-toting antiheroes that dominated American cinema at the time in movies like Dirty Harry and Death Wish. A Vietnam veteran* whose family is killed when they’re caught in a mob shootout in Central Park, Frank Castle uses his military training, tactical skills, and a staggering arsenal of weaponry to wage war on organized crime as The Punisher, polarizing the heroes of the Marvel universe along the way. Movie studios have tried bringing The Punisher to the silver screen thrice over the past 27 years, to incredibly mixed results. From rhyming hobos in The Punisher (1989), to re-enacting Othello in The Punisher (2004) to the B-movie insanity of Punisher: War Zone (2008) it’s been a long, rocky road for Frank Castle.

Does he wear the skull: No 😦

Though Frank’s first cinematic outing was released at a time when The Punisher was riding a wave of invigorated popularity at the height of the comic industry’s fervor for gritty, morally ambiguous heroes in the wake of books like Watchmen and The Dark Knight Returns, The Punisher ’89 does little to reflect the tone of the Punisher books of the time. Instead, the production aims for a campier tone that’s at odds with a movie about a guy whose m.o. is gunning down mobsters. The winking, cartoonish style makes frequent use of shots following arrows and shuriken flying through the air (in an unnaturally static sort of way) and nesting in people’s jugulars to jarring, tonally whiplashing effect.

Chintzy is the best word to describe the aesthetic of Punisher ’89 . Filmed on location in Noticeably-Not-Manhattan, Australia, Punisher ’89 suffers for a low-rent production design that borders on the type you’d find in porn, or worse, the 1994 Fantastic Four movie, despite having literally 9 times its budget. Frank is distanced from his war vet origin and fitted with a “good cop gone rogue” backstory that doesn’t give the character new insight, but does allow the story to fall into the snares of almost every bad cop movie cliche one could imagine. Frank’s ties to war, particularly one as tragic as Vietnam, has always been a part of what makes the Punisher compelling in a way that making a cop isn’t. And boy do the cop tropes pile up. Louis Gossett Jr. does his best to elevate his character Jake Berkowitz above a generic “grizzled old black cop getting too old for this shit”, but isn’t given much material to do so. Not as much can be said for the “chipper, idealist cop” who tries to partner with him (Nancy Everhard). Between the low production values and heavy use of cop tropes, it feels like Punisher ’89 is setting up a TV show that never materialized, though there isn’t the evidence to suggest this is the case.

Action star and chemical engineer Dolph Lundgren holds his own as The Punisher in defiance of the movie around him. Apparently borrowing an accent from his Rocky IV rival Sylvester Stallone, Lundgren provides the movie its grace notes. He doesn’t necessarily feel like The Punisher per se, but he handles the one-liners the physical action, and interacting with the homeless failed actor turned informant and confidant (Barry Otto) he’s inexplicably given gracefully.

There are a few other bright spots in Punisher ’89. The final act during which Frank and a mobster (Jeroen Krabbe) temporarily form a truce to rescue said mobster’s son from a yakuza headquarters provides some stylish imagery and a final moment that’s surprisingly powerful, but even these moments are hindered by poor execution and the bargain-basement aesthetic.

Does he wear the skull: Yes, for pretty silly reasons. 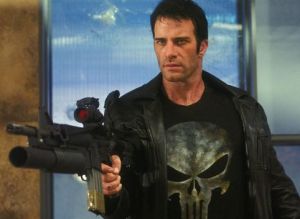 Released in the throes of the early-2000s boom of superhero movies in the wake of X-Men and Spider-Man, Punisher ’04 is perhaps most interesting as a document of how studios were trying to get a grasp on comic book properties in the early oughts. Directed and written by Armageddon and Jumanji scribe Jonathan Hensleigh and starring Thomas Jane as Frank Castle, it’s an adaptation curiously trapped between high-minded concepts and the worst traits of that wave of comic movies. Hensleigh draws from various comic book incarnations of The Punisher and a host of non-comic influences ranging from classic crime films to Othello, but smothers these concepts with a clunky script and misguided comic relief.

Like its predecessor, Punisher ’04 makes some changes to Frank’s origin. Still a military vet, Frank is an FBI agent on the eve of his retirement when gangster Howard Saint (John Travolta) decides to take revenge on Frank by killing him and his entire family at a family reunion in Puerto Rico. The hit results in a shootout between Frank and Saint’s gangsters, during which he’s left for dead. While the murder of Frank’s whole family in an act of revenge ups the stakes, it also makes Frank’s arc less interesting. In the comics, the murder of Frank’s family is random and senseless. Frank’s revenge mission isn’t laser-focused on a single person, it’s defined by a chilling generality and compulsion. Frank’s takedown of Saint and his crew makes Punisher ’04 feel like it could be any generic action movie rather than specifically one about Frank Castle.

In the same way Ang Lee tried to frame his 2003 Hulk as a classical tragedy, Hensleigh tried to elevate the material through allusions to Othello. In this case Frank is Iago; part of his revenge plan involves tricking Howard Saint into thinking his best friend (Will Patton) and his wife (Laura Harring) are sleeping together and into killing them both. Casting your protagonist as one of Shakespeare’s most infamous villain is a bold choice, and not necessarily a terrible one. There’s arguably something more unsavory in this plot than in straight up shooting a bad-guy in the face. Making the viewer question Frank’s actions and the depravity with which he accomplishes his mission doesn’t stray far from existing takes on the character, but it doesn’t work when the movie surrounding it is still signalling that The Punisher is unequivocally a good guy, as Punisher ’04 does. The movie is intent on toying with interesting ideas and promptly dropping them.

The highbrow nods in Punisher ’04 are also undone by a messy script. The dialogue is awkward and too convenient (the trademark skull shirt comes from a Puerto Rican gift shop and is given to Frank by his son moments before he’s killed. The shirt “wards of evil spirits”.) The inclusion of a subplot where Frank defends his wacky neighbors (Ben Foster and John Pinette) and almost-love-interest Joan (Rebecca Romijn) feels particularly unnecessary and reeks of the extraneous additions to comic mythos indicative of many early 2000s comic movies. Thomas Jane feels miscast as Frank Castle**, coming off too slick and too quippy for the character’s own good. Similarly, Travolta seems uninvested in a role the movie half-heartedly posits as tragic.

It’s a slicker production than Punisher ’89, but less fun to watch.

Does he wear the skull: Yes.

Released the same year as The Dark Knight and Iron Man to noticeably less acclaim, Punisher: War Zone is a better comic book movie than its reputation suggests. As fellow Rooster Illusionist Drew Parton said in a 2013 review of the movie it is”absolutely balls-to-the-wall crazy”. The film succeeds for being the most consciously stylized of the three. Punisher: War Zone is consciously a hyper-kinetic and hyper-violent B-movie. Director Lexi Alexander contextualizes The Punisher in the amped up grindhouse world to which he’s well-suited, approaching the version of the character as written by Garth Ennis. The violence, divorced from reality in the style of Sam Raimi or Tarantino, is allowed to be shocking and occasionally funny in the way even the similarly R-rated 2004 feature wasn’t.

It’s not for nothing that it’s also the most comic accurate take on the character. Frank’s comics origin is left intact in this reboot, and told through flashbacks instead of through an origin rehash. Ray Stevenson (currently Volstagg in the Thor franchise) is the best Frank Castle to date, casting a grim and nearly silent figure in comparison with Lundgren and Jane. Stevenson is more believably tortured than the past incarnations, conveying a haunted sadness with his eyes and facial expressions. He does more with a look to earn a viewer’s understanding than either of the others with lines of dialogue.

It’s by no means up to snuff with the heavy-hitting superhero movies of its year. Like a lot of grindhouse pictures, there’s a lot of glut through the middle. It’s easy to tune out when the film’s not at maximum splatter, and it frequently feels like a Schumacher Batman movie on crack, with Dominic West’s Jigsaw (the first actual comic villain in three movies) doing Tommy Lee Jones’ Two-Face one crazier. It’s perhaps not top shelf in the order of most of today’s comic book fare, but far worthier than it’s credited. Of the three, it’s the film that most handily invites a re-watch, and it’s easily the most fun.

Though War Zone has probably gotten closest, there’s yet to be a perfect on-screen incarnation of The Punisher. Perhaps Jon Bernthal, the Frank Castle of Marvel’s Netflix universe, will get the opportunity to illuminate the character across the 14 episodes of Daredevil season 2 than his predecessor could in 2 hour movies. Even if season 2 doesn’t rise above Frank’s cinematic legacy, his previous appearances over the last 27 years prove one thing comic fans have known for decade: you won’t be able to keep Frank Castle down for long.

*Marvel’s sliding timeline has made this a little tricky, and has made Frank the veteran of more recent wars to keep up with the times. Good thing we keep having these, right? Haha…*sigh*

**Though I’ve heard good things about his portrayal in the 2012 Punisher fan film Punisher: Dirty Laundry. Though that’s an article for another day.