I think I commented a little while ago that I managed to miss pretty much all of the major foreign films from 2014. Now that it’s the following April, I’m finally beginning to catch up, although I have to question why from time to time. 2014 was not an amazing year for movies. I said it. If we take award shows and critics top ten lists as any indication, I can’t help but get the impression that the criteria for what passes as a great movie is sliding. People have recognized the formula, you know? A successful blockbuster must include these things, an Oscar movie must have x of this and y of that, etc. Times like that, you have to turn to independent and foreign cinema for some variety and originality… except there’s a formula now for those, too. If you watch a Swedish movie about a family slowly unwinding, you can predict what will mostly likely go down. If that movie met widespread critical acclaim, though, you’re gonna get a damn good movie… right? Right? 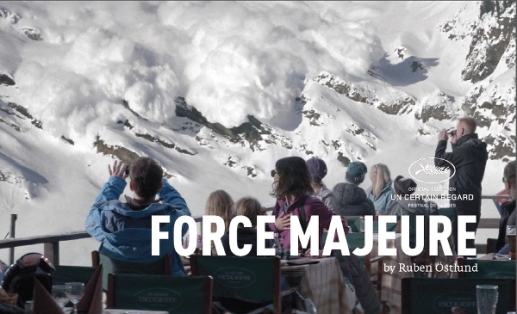 The Plot: While vacationing in the French Alps, a Swedish family (Johannes Kuhnke, Lisa Loven Kongsli, Clara Wettergren, and Vincent Wettergren as Dad, Mom, Daughter, and Son, respectively) are witnesses/bystanders to a massive avalanche, which causes a white out and the illusion of fatal danger. The family dynamic suffers considerable strain when Tomas, the father, abandons his wife and children during the perceived disaster, and his wife Ebba must confront the startling revelation of his cowardice.

Force Majeure is the kind of slow moving, redundantly written, artistically shot, quiet family drama that only a European would ever bother making. Like most films of this ilk (I’m reminded tonally of Rust and Bone), the film starts out with a truly brilliant premise that any decent writer could easily spin into a tight drama about weakness, instinct, love, and human nature. Unfortunately, the temptation to do so evidently eluded writer/director Ruben Östlund, who opted instead to meander repetitively towards a painfully fabricated and ultimately pointless finale. He shoots nearly every single scene the exact same way: a steady, still, uncut wide shot; in an age where fast-paced editing is all the rage, I can appreciate a slow movie with careful shot construction, but this technique loses its effect if there’s no contrast in the two hour runtime. Since every scene after the avalanche is also pretty much a rehash of the same conversation (the “Crap, my husband’s a pathetic coward” conversation), the film ends up kind of boring to watch. There’s no variety, scene to scene, in either content or construction. You know what else is repetitive? The music. The entire soundtrack consists of a single minute-long excerpt from Vivaldi. If that doesn’t whack you in the face as a half-assed pretension, I don’t know what does. After about forty minutes, I found myself wondering why the hell I should care.

Beofilm
Adult temper tantrum: it’s good because I say it is.

That’s the thing, I guess. I think Force Majeure would have made a really excellent and hard-hitting short film. As evidenced by everything I just said about it, Östlund only had enough material for about twenty-five minutes. I don’t think it’d be difficult to edit the whole project down to that length, though I’m not sure it’d be entirely worth the effort, since even if you remove all the superfluous scenes, this is, in essence, just a movie about a pathetic man gradually growing more and more pathetic until, in the end, the director kindly points out, “Hey, we’re all a little pathetic, so don’t worry about it.” Like so many indie movies and blockbusters and Oscar movies and… ugh, most movies in general, I’ve noticed that a lot of European films think that saying nothing at all is the key to a great and truly deep movie. Call me old-fashioned, but after I devote two hours of my life to staring at screen, I like to think that I gained something from the experience. I love watching movies, so I don’t want to feel like I’m wasting my life every time I do it.

Despite my resoundingly negative and hate-strewn review, Force Majeure is technically not a terrible movie, it just lacks any sort of depth or originality whatsoever. That wouldn’t frustrate me so much if the possibility for greatness wasn’t so easily discernable. Unfortunately, this film exemplifies wasted potential. Now, don’t take all those broad generalization I made earlier as hard and fast opinions; I love movies, be they foreign or domestic, blockbuster or indie, and I’m sure as hell not ready to give up hope entirely, which is why I’m probably reviewing another sad foreign movie from 2014 next week: I don’t know when to quit. What I do find troubling, though, is the idea that this is what passes for greatness now. A lot of wonderful, original, thoughtful films are getting glossed over and forgotten about because they don’t hit all the accepted “right” notes to qualify as excellent. These formulas are wearing me down. I think I need to go watch another Vincent Price movie or something.

One thought on “Second Breakfast: ‘Force Majeure’ Is a European Movie”