Let’s get one thing clear right out the gate: Aquaman is a national treasure.

A legion of hack comedians, unenlightened comic book fans, and people who only half remember the character from Superfriends have made Arthur Curry, King of the Sea, a pop culture punch-line for much longer than the character deserves. For these reasons, I was excited to see that DC’s first animated feature of 2015 would focus around Aquaman’s origins and re-introduce the character to a modern audience. And while Justice League: Throne of Atlantis provides the character with a solid introduction, the film into which it’s built felt lacking. 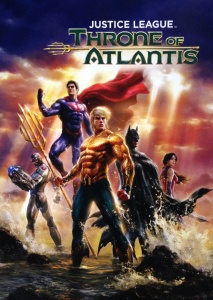 The plot: When a US submarine is destroyed and its crew killed by unknown assailants, the task of finding the culprits responsible falls to a newly formed, yet distrusting Justice League comprised of Superman (Jerry O’Connell), Batman (Jason O’Mara) Wonder Woman (Rosario Dawson), Cyborg (Shemar Moore), The Flash (Christopher Gorham), Shazam (Sean Astin), and Green Lantern (Nathan Fillion!). When evidence points to an attack from the mythical sunken city of Atlantis, the League goes in search for of the sunken city. Meanwhile, loner and surly Mainer Arthur Curry (Matt Lanter), still reeling from the recent death of his father, is attacked by assassins from the ocean, only to be rescued by Atlantean royal guard Mera (Sumalee Montano) and informed he is the heir to the throne of Atlantis. Arriving at Atlantis, the Justice League learn that attacks on surface dwellers and on Atlantis have been orchestrated by prince Orm of Atlantis (Sam Witwer) and the mysterious Black Manta (Harry Lennix) in a move to usurp power from the benevolent Queen Atlanna (Sirena Irwin). As war brews between land and sea, it’s up to the Justice League and Aquaman to foil put a stop Orm and Manta’s plan before its too late and help Arthur claim his birthright as the King of Atlantis.

A sequel to last year’s Justice League: War and loosely adapted from writer Geoff John’s Justice League run, Throne of Atlantis plays like the second episode in a Justice League cartoon than it does a standalone feature, which benefits some characters and casts other to the sidelines. As Aquaman’s story, Arthur Curry gets the most attention and the fullest character arc, but Throne of Atlantis also gives notable screen time to Cyborg, who fears losing his humanity into this technological body, and to the developing relationship between Superman and Wonder Woman, who bond over being the only of their kind in a world of mortals, assumedly because Wonder Woman forgets that she comes from an entire island of other magical warrior ladies. Batman, largely viewed from the perspective of his teammates, remains a mystery, though the film plants the seeds for a developing a gradual friendship and trust between him and Superman as the two investigate a ransacked lab. Unfortunately, this leaves the remaining three members of the League to try and hit the same comic relief notes. For their limited parts, Fillions’s Green Lantern and Sean Astin’s Shazam are pretty great. Fillion’s frat bro as space cop works in the doses we get, and Sean Astin does some pitch perfect work as a grown superhero with the mind of an enthusiastic tween. Left aside, unfortunately is the Flash, who doesn’t get much to do save for provide an extra party for action scenes.

When the film gets along to telling Aquaman’s story, it’s for the most part done well. The film finds a bitter, aimless Arthur Curry hanging around a bar and picking fights with anyone who tries to eat the lone lobster in the bar’s lobster tank (I said for the most part, didn’t I?) and ends with him accepting his responsibilities as a king and hero. It’s a pretty standard hero’s journey tale that streamlines the characters origins for a wider audience who might read the comics and provides the aforementioned haters with a strong argument for the character’s validity. 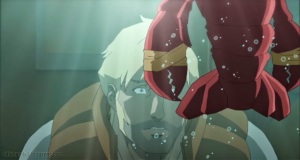 The flaw however, is that the film is a Justice League film first and an Aquaman film second, meaning that while Aquaman does get a complete arc, its telling feels rushed at times. His journey from outcast civilian, to accepting monarchial responsibilities, to joining a team of super-humans takes place in a relatively short time span. Ideally, Throne of Atlantis would give more of its screen time to Arthur, or function as an Aquaman solo film, with the League making an appearance towards the end of the film, as the forces of Atlantis and the US clash. Disappointingly, as result, Aquaman’s faceoff with evil half brother Orm doesn’t hold the weight it ideally should, and his conflict with sea-Vader Black Manta (whose motives are already scant in this film), is nearly non-existent. The overall feeling is that of a company, spurred on by years of jokes at the character’s expense, trying to confidently assert Aquaman’s appeal, but not giving its all in case the audience doesn’t accept him.

While the character work for its heroes is uneven, as superhero action film, Throne of Atlantis works wonders. The sleek, slightly anime influenced art and production design calls to mind the unjustly cancelled Young Justice cartoon series and almost justifies the needlessly complex character designs for the Justice League. The action set pieces have some weight without losing the fun or energy of a well-done comic book battle, the best of which is perhaps the League fighting a Cthulu-esque monster in an Atlantean trench, in which Supes delivers the Cthulu-beast an uppercut so glorious, Eldritch Adaptations will be feeling it for weeks. 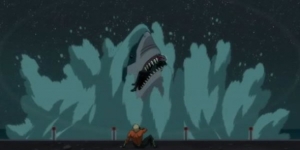 My only other complaints with the film are with some less than stellar line reading from supporting cast members, the inexplicable introduction and pointless death of a major player in Aquaman lore, and some curious changes in canon. In a project like this, simplifying and altering comic lore for a wider audience makes sense, but I can’t help but feel some of these changes would make for some confusion with fans of the film looking to cross over into the comics.

Justice League: Throne of Atlantis is an ultimately unfulfilling animated film with some promising and occasionally excellent moments. DC makes a better effort at championing their maligned ocean hero than they’ve done in a while, even if they don’t stick the landing. Throne of Atlantis is thin, easily digestible superhero action. If this film makes the case for Aquaman’s validity, it’s up to Zack Snyder to make him shine in Dawn of Justice.