When you think of the holiday season, what comes to mind? Is it a twinkling array of lights? Family and friends? Are you filled with the spirit of hope, generosity, and miracle?

Or do you see hairy, unblinking faces? Do cartoon sand monsters slither through your mind? Does a large, four armed cook yell at you whenever you close your eyes and think of the yuletide? Of course not; only a madman would see these horrors and think “holiday”. Ladies and gentleman, I am that madman. I have seen the Star Wars Holiday Special, and I have lived to bear testament as a holiday gift to you. 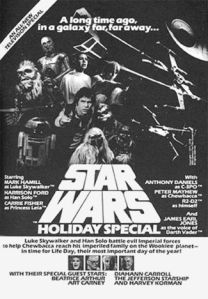 For those of you unfamiliar with the infamous Star Wars Holiday Special, the legend is a follows. Strange eons ago in a time called 1978, George Lucas, clearly acting with a level head, partnered with CBS to bring his epic saga of space adventure from the silver screen to the living rooms of America a holiday spectacular on November 17, 1978. Featuring the principal cast of Mark Hamill, Harrison Ford, and Carrie Fisher (and Vader voice work by James Earl Jones), the special is famous for being the debut of fan-favorite Sarlacc snack Boba Fett in a cartoon adventure and even more famous for being a blight on humanity. Panned universally by critic and fan alike, the special only aired once before the network and George Lucas locked it up, never again to see the light of day…or so they hoped. For years, bootlegs copies circulated through comic and sci-fi conventions, luring in curious nerds until one fateful day it made its way to the Internet, where a film critic hoping to write a Christmas article would view it.

And, folks, let me tell you, it lives up to its reputation, but perhaps in a ways that’s not as fun as I hoped.

The Star Wars Holiday Special is utterly fascinating. A hybrid of Star Wars iconography, a variety show, and an alarmingly depressing sitcom Christmas episode, the show takes the pop culture signifiers and celebrities of the era and twists them together into an unrecognizable balloon animal of a holiday celebration. After an open with two star destroyers firing upon the Millennium Falcon and a Blade Runner narration-level performance by Ford, we are taken to the planet Kashyyk (inexplicably pronounced Kazook) where we meet our real hosts for the next 98 minutes, Chewbacca’s father Itchy, his wife Malla, and his son Lumpy as they prepare for a festive celebration of Christm- I mean Life Day. What is Life Day and what does it mean for the Wookies? Don’t worry about, it champ. But let’s just say that certain traditional light-orbs are going to be hoisted skyward by robe-clad Wookies.

The choice to focus on a family of Wookies that don’t go on adventures across the galaxy with Han Solo is an ambitious one, particularly since the main drama of the episode is that Chewbacca may not make it home in time for Life Day. More ambitious is the decision not to translate or provide any subtitles for the growling Wookies, instead relying on pantomime and the facial expressions on through their masks (all noticeably less realistic than Chewie’s). What we are treated to is nearly ten minutes of uninterrupted Wookies noises, save for performance by terrifying hologram acrobats. 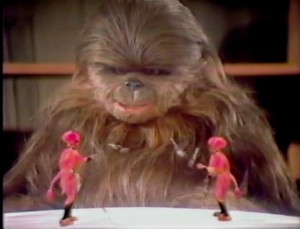 20th Century Fox TelevisionI accidentally watched this scene backwards while rewinding and now I can only speak in screams.

While most of the action will take place in the very 70s treehouse of Chewbacca’s family, we are provided celebrity cameos via video feed and home visits. Luke and Leia pop in via video call to wish the family a merry Space Christmas (clearly the better name) and explain they don’t know where Han and Chewie are either. Their performances are as flat as Harrison Ford’s, but the two do their best considering that are both essentially talking directly to the camera in an empty room. Also stopping in are Honeymooners star Art Carney as a bumbling salesman, comedy legend Harvey Korman pulling double duty as a malfunctioning android and in drag as the aforementioned four-armed culinary terror beast, and the band Jefferson Starship as literally the only band that makes sense for this special. The cameos range from almost endearingly unfunny to “finding special magazines under dad’s bed” uncomfortable. In what can only be accurately be described as deeply upsetting, actress and singer Diahann Carroll performs a song as what is essentially a phone sex hologram watched by WookieGrandpa Itchy. How an aging Wookie’s sexual fantasy made its way out of someone’s skull and into family holiday programming defies answer aside from “probably cocaine”.

This insane fluctuation in tone characterizes the entire special. While the argument that Star Wars is a franchise only meant for kids doesn’t draw much water in 2014, in 1978 it was hard to deny that the first movie wasn’t meant to be all ages sci-fi, making the weird nose-dives into adult themes in this special utterly bizarre. Not long after Itchy’s creepy sex video, the Galactic Empire barges in to the household with orders to search for hidden rebels and “subversive forces”. You know what might be kind of weird and tasteless for some winter celebrations? Forced Holocaust analogues. In the span of about then minutes, we go from wacky cooking show to officers threatening to have his Stormtroopers shoot an innocent family to a performance by Jefferson Starship to soldiers ransacking a child’s bedroom. Merry Life Day, everyone!

To distract himself from nearly being blasted to death by soldiers, Lumpy watches the cartoon in which Boba Fett debuts, which seems like it might blow the cover for a guy whose whole business relies on being a rarely seen often feared figure. Confounding animation aside, the cartoon isn’t too horrible, if pretty forgettable. It’s strange that a cartoon, unrestrained by the budget and effect limitations of the live action segment, wouldn’t showcase our heroes using Lightsabers and having space dogfights and that Han and Luke spend a lot of it unconscious, but that’s just me. You know what? I take it back, that’s super dumb. What the hell, forgotten cartoon? You can keep the invisibility amulet everyone was looking for some reason. 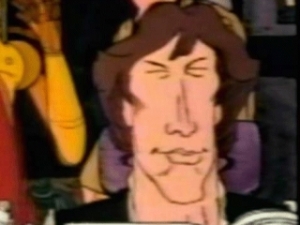 Providing a surprisingly strong presence in the special is Bea Arthur. Between scenes of Empire home invasion, we get an interlude with Bea Arthur as the owner and bartender in a sleazy Mos Eisley cantina being shut down by the empire. Bea Arthur is the gem of this program. Sassy and soulful, she goes toe to toe with Mos Eisley roughnecks, unwanted admirers, and Empire goons, all before delivering a surprisingly touching cabaret-style song as she buys her customers a final round and sees them off with “it’s goodnight, but not goodbye”.

So guess what? Han and Chewbacca make it to Kashyyk in time for the life day celebration. The empire leaves after a minor struggle in which a Stormtrooper is knocked off of a balcony and falls to his death, leaving the Wookies and Art Carny to cover up his death with his superiors, a move that warmed my heart, because no holiday celebration feels right unless my loved ones and I cover up a murder from the authorities. Cue holiday light orbs, cue Carrie Fisher singing. Tone remains a problem to the end.

The Star Wars Holiday Special is a critically maligned oddity, but not a very fun one to watch. While films like The Room and Troll 2 have become cherished cultural artifacts because of their brazenly shoddy and brazenly earnest filmmaking, much of the holiday special is just a slog to get through, and I posit it’s because it gets to far from its central strengths, namely Star Wars and the holidays. I can understand the impulse to explore Star Wars in a more lighthearted, and comedic tone. With two years until Empire Strikes Back, I can imagine fans were eager to experience more of this universe. The draw of the holiday angle could be learning more about the Jedi religion and the ways of the Force. But by focusing on new characters and on hokey and frequently cringe inducing cameos, it’s hard to remember this is even supposed to have anything to do with Star Wars at times. I went in hoping to find something so bad it’s good, but found something too boring and misguided to watch through an ironic lens. After watching all of the Star Wars Holiday Special, I can understand why Lucas buried it.

One thought on “A Bomb in the Lasagna Watched All of the “Star Wars Holiday Special” For You: A Life Day Extravaganza”