I’ve spent a lot of time thinking about Gotham.

Since the show was announced last year, I have been anticipating the premier with equal measures excitement and dread; my expectations and enthusiasm wildly fluctuating with every new image, trailer, and bite of information released. Now Gotham is here. Premiers have been premiered, live tweets have been live tweeted, and critics and fans alike have thrown down there preliminary thoughts into the internet void.

So, after months of fitful waiting, how did the pilot of Gotham turn out? About as well and as concerning as I had imagined, it turns out.

the Plot (so far): When millionaires Thomas and Martha Wayne are gunned down in what appears to be a mugging gone wrong, the murder case falls to the young, idealistic Gotham City Police Department Detective Jim Gordon (Ben McKenzie) and his cynical and haggard partner Detective Harvey Bullock (Donal Logue). The good cop/bad cop duo are informed by club owner and rising crime lord Fish Mooney (Jada Pinkett Smith) that the culprit was a small time crook named Mario Pepper, whom Bullock kills when he attempts to attack the officers. The case appears settled until Oswald Cobblepot, a conniving gangster looking to usurp Mooney’s power, informs Major Crime Divisions Officers Renee Montoya (Victoria Cartegena) and Crispus Allen (Andrew Stweart-Jones) that Pepper was framed by the crime boss, intimating that the murders may be something more than a simple mugging. With the case officially closed but the killer still on the loose, a personally disgraced Gordon swears an oath to Bruce Wayne (David Mazouz) and Alfred Pennyworth (Sean Pertwee) that he will find the real killer and bring him to justice.

One thing is certain, you can’t call this pilot unambitious. Gotham‘s writers are clearly eager to introduce the viewer to the titular city and its residents. The show opens following a tween Selina Kyle across Gotham rooftops as she wordlessly goes about some orphan pickpocketing business, eventually ending up at Crime Alley just as the Waynes are leaving the theater. How do we know this is Selina Kyle (aside from the massive, ubiquitous ad campaigns that lay that out rather clearly)? One of the first things we see her do is steal milk to feed a cat. Get it? Benign, if unnecessary, this scene is representative of a lot of the problems with the episode in general. The show wants to introduce us to so many of the characters that will form Batman’s rogue’s gallery in the first episode as fast as they can without stopping to think whether these introductions are necessarily good or important to the plot of the first episode. What follows are a slew of future Bat-foes being introduced with the subtlety of Batman ’66 (but with less charm). The show doesn’t seem to trust that its audience will understand who these character will be, and chooses to introduce them with painfully obvious references. Oswald Cobblepot is carrying an umbrella, Edward Nygma is literally introduced asking a riddle to Gordon and Bullock, within a minute of being introduced to Ivy Pepper (read: Pamela Isley), we get a shot of her holding a potted plant. Ten bucks says Harvey Dent gets introduced reading a law book that obscures half his face. 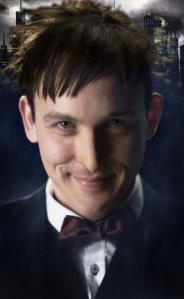 Warner Bros TelevisionExecutive One: Do you think audiences will understand this is the Penguin?
Executive 2: Absolutely not. Get me an umbrella.

Telegraphing obvious information aside, these introductions are problematic because most of them don’t advance the plot. Of the villains introduced, the only necessary to the story so far are the Penguin and arguably Selina Kyle, as the show seems pretty eager to make her a foil/ eternally intwined soul with Bruce Wayne. That’s not saying these other villains have no place here, but it wouldn’t have hurt to introduce them naturally in later episode than shove them all out the gate in the pilot. The less said about the red herring hack comedian added for no other reason than to manufacture mystery the better.

Surprisingly, the most compelling villains so far are John Doman’s Carmine Falcone and Smith’s Fish Mooney. Jada Pinkett Smith plays her femme fatale crime boss with scenery chewing gusto, alternating between vamping and flashes of violent anger and clearly just enjoying the role. Doman as Falcone is a different take from Tom Wilkinson’s version in Batman Begins. Wilkinson’s Falcone knew he was a thug who couldn’t be touched by the law, whereas Doman’s Falcone fancies himself a businessman and gentleman criminal who wants what’s best for his city, playing it closer to the Brando-esque version comic fans saw in Year One and The Long Halloween. The dynamic between Falcone and Gordon could be one of the strongest elements of the show as this season progresses.

Speaking of Jim Gordon, I should probably talk about him after spending 600+ words on the bad guys, huh? I never watched The O.C. when it was on, so I didn’t have much in the way of preconceived notions of the guy when I heard he was in the role; but any concerns I could have had about the dude bringing the proper gravitas to the role were put to rest by this episode. Technically his second role in the Bat-verse–he voiced the Dark Knight Detective himself in the animated Year One movie–McKenzie steps up to the plate and delivers as Gotham’s favorite honest cop. It’s pretty hard not to talk about Year One when talking about Jim Gordon as a protagonist because that story defined so much about how we understand the character today, and its clear that McKenzie is trying to live up to that towering legacy.He nails the idealism and frustration of a good cop who wants to make a difference in a city that’s intent on staying rotten. Gordon doesn’t hide his dislike for the crooked cops and criminals he goes to for information but concedes that it’s necessary for him to do his job well. The show differs from comic continuity in that it makes Gordon a Gotham local and his father a former D.A. rather than being a recent transfer from Chicago. This change could alter a lot of Gordon’s motivations and goals, and this plot change could easily allow McKenzie to do things with the role that are distinct from any other iteration of the character.

McKenzie seems pretty natural interacting with most of the inhabitants of Gotham, but he really shines through in his interactions with Bruce Wayne. He really sells the connection between the two, providing Gordon with a similar drive that Bruce will have, both Gordon’s commitment and frustrations with the system contributing to the formation of the Bat. His relationship with Bullock is pretty standard good cop/bad cop stuff right now but it’s a promising pairing that will be a core of the series if done right. Bullock was created as a surly, anger prone, and just downright unlikeable detective who got the job done and truly cared about making a difference, and it seems like Gordon is going to have an influence on Logue’s Bullock as things progress. The two are in fine form here, which is impressive because they are saddled with some pretty awful dialogue.

The dialogue in the pilot is pretty remarkably bad. Large chunks of unprocessed exposition are inserted into dialogue throughout the pilot. Fish Mooney is introduced by Bullock essentially reading off all of her character traits. Most of the main cast do admirably with clunky dialogue, but Bullock seems to get stuck with some of the worst. At one point Bullock refers to Renee Montoya as a “pill-head looney bird” which was really, really funny in a way I don’t think it was meant to be. If there’s one area that I’m gonna be praying for some improvement, it’s here.

Warner Bros Television“I thought it was a good line.”

Gotham is a show that is so excited to hit the ground at full speed that it trips out of the gate. There is definitely promise in this show and definitely a lot of stuff to like in this first episode, but the execution is flawed. If Gotham can reign in its likely-to-grow stable of Batman foes and allies, and if the writers could perhaps spend a little more time speaking their dialogue aloud to make sure it sounds like things humans would say, Gotham could become the excellent origin of a city and a hero that fans and the network want it to be.