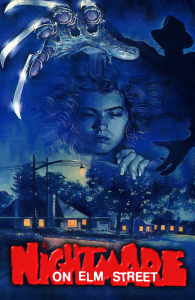 Lesson – This is the perfect 80s Horror.

This month is sort of unofficially nicknamed Shameful September (I like theme months), where I’ll be watching classic horror films I, sigh, have not seen. Nightmare On Elm Street is one of them, despite going to college about twenty minutes from the inspiration house (sadly now torn down). I’ll also be watching Halloween, The Exorcist, and The Thing. Okay, yes, I think these are also all 80s horror, so sue me.

In the event that you are unaware, Nightmare on Elm Street is a Wes Craven film about a one Mr. Freddy Krueger, who happens to be a fedora-resplendent slasher with manufactured claw hands who can get you while you’re sleeping. Namely, in your dreams. It has spawned many sequels, a 2010 remake, and a series of battles between Krueger and Jason Vorhees of Friday the 13th. It’s also Johnny Depp’s first movie.

“It was just a dream.,” chirps the perky blonde (Tina) who awakens with physical evidence of an otherwise normal nightmare. Freddy has the honor his own nursery rhyme, albeit about the bogeyman technically. Then we move effortlessly into a conversation about dreams and hard-ons, because this is a cheeky 80’s movie. Turns out Tina’s group of friends are all having nightmares! About the same man! Freaky. Also freaky, a very young Johnny Depp. Look at his cute little face.

To their credit, the kids (namely Nancy) pick up pretty quickly on what’s going on, or at least most of it. Nancy even goes to bed to try and figure out what’s happening, and sees Freddy trying to go and kill Rod (a-hole who’s been pinned for Tina’s murder) but she doesn’t do a very good job of it because this is a horror movie and Freddy is the master of his domain. I personally found Rod’s death scene pretty unsatisfying. Make no mistake, this movie is pretty hard hitting, like, immediately. Within the first twenty minutes there’s a pretty graphic and extreme death scene, pivotal of course because we as the audience have to become aware of what Krueger is capable of immediately, but also instill doubt in the characters.

Now, this is Wes Craven we’re talking about, so we’re also talking about fantastic practical effects and subtle tension features. Take a look at this screenshot. It’s right at the beginning of the movie, a quick pan through the front yard to get to the teenagers talking inside. See any familiar shapes? Check out the window on the right. Nightmare really derives some of its tension and brilliance from not knowing when the kids are dreaming or not, which makes up for a little bit of the silliness that inevitably happens in dreamland. Robert Englund, of course, is the master of psychotic silliness. He’s the master of the slasher cat and mouse game that sometimes falls short in slasher flicks.

Make no mistake, Nightmare is a classic because it has genuinely creepy moments in it. There’s a sequence with Nancy in school after Tina’s murder (who goes to school the day after her best friend dies?), and it’s got some really perturbing cinematic moments. The amazing prosthetics work certainly doesn’t hurt. It’s one of the most iconic makeups for a reason.

Basically, if you’re like me and you’ve taken your time seeing Nightmare, I would suggest doing it. For the obvious reasons, of course, since it’s a “classic” with obvious influence over modern horror movies, but also because it holds up pretty well, I think. I mean, it’s full of angsty teenage dramatics and it isn’t a serious movie most of the time, but it’s not a bad watch. Plus, bonus adorable little Johnny Depp.