Hey guys! It’s Sarah, from SciFridays here – remember me? I’ve been on hiatus because y’know, defending a master’s thesis. Right now I’m in the middle of moving to a whole different part of the country, but my love for you (but mostly for Guillermo del Toro) has brought me back a smidge early. Actually, just arrived in San Antonio – if you’re in the area give me a shout via the comments!

Hooray! I get to recap a show that isn’t on Fox! It’s on FX. FX. /cough. If you’ve met me in real life, you know I have some healthy love for Mr. del Toro. I was recommended the book by a good friend of mine who also loves del Toro (Adam!) and it’s a seriously delightful read if you have the time. It’s not super long, and it’s co-written by Chuck Hogan. It begins with a small plane landing at JFK, but everyone is dead. I thoughtfully brought the book with me to read, and proceeded to begin to read it on a small plane to JFK. The universe, I swear.

So here we go!

Already, we start with a fair amount of exposition that is not present in the novelization. I expect that there will be a lot more detail, because it has to stretch out into a series, so I’ll try not to harp too much about it. In fact, since it’s been a while since I’ve read the book and it doesn’t matter anyway, let’s drop all the comparisons.

If it isn’t clear to every viewer within the first five minutes, FX promises to pull absolutely zero punches when it comes to the vamps. The jury is still out on whether or not this is a good idea. We open with the aforementioned plane, and the flight attendants. Something erupts from the cargo bay, much to the apparent dismay of flight control. A few obvious observations and a weird level of safety protocol and nonchalance later, we have our brief splash screen. Post commercial break we find ourselves in NYC, and the introduction of our CDC main man, Ephraim (Dr. Goodweather), trying to look appropriate levels of disheveled normalcy. He’s headed into a family clinic, actually for custody counseling sessions. Ephraim is played by Corey Stoll, who manages to channel a Jeff Goldblum meets Aaron Eckhart mature boyish charm with an edge of quirk. The exposition continues to be heavy handed as we move from custody hearing to weird dead plane as Ephraim makes his case to investigate. 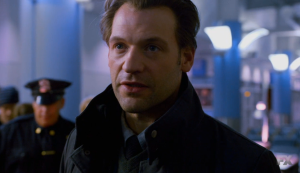 We switch abruptly to a pawn shop somewhere, featuring an old man. He’s a bad ass, and he makes quick work of some cranked up street thugs who try and take advantage of him. His name is Abraham, and he’s important. Mostly because he knows what’s going on, and has secret doors and fancy swords and such. His sword is a cane, and that cane is a wolf, y’know, the enemy of vampires. He starts talking to a preserved heart, and it becomes clear that he has fought this enemy before. He feeds the heart blood (Feeeeeeed me, Seymour) and it becomes apparent that the heart is more parasite than anything else. Creepy. 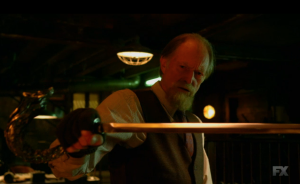 Back to the CDC, Ephraim and lady partner are tasked with going onto the plane. Surprise, everyone is dead. Also Sean Astin is there, monitoring them from the outside. They begin wildly speculating about the cause of death. A UV light looks like a hotel’s worst nightmare.

Cinematography-wise, we’re looking at some weirdly close up linger-shots. It’s kind of jarring, when mixed with the smooth pans, and makes me feel a little uncomfortable. I guess that’s good because it’s a horror show, and it should make me uncomfortable. A close-up on a hand twitching, a close up on nothing important. Switches back and forth. The soundtrack is minimal but adds jump scare effect when required. 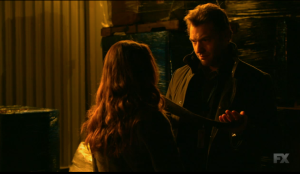 Some passengers come to life, one is light sensitive. Because vampires. (Insert spooky noise). It occurs to me that some viewers are not immediately aware that this is a vampire tale. I’m sure it’s clear by the end of the episode, so I’m not concerned about spoilers. It is, however, a Contagion-style-vampire tale.

Flash to a weird luxury medical facility, an aging man and several weird jars. A man visiting the older man speaks about the cargo – arriving ‘safely’. Both men look like human versions of the Silence. One man doesn’t breathe. Again I say, creepy.

Back to the CDC, we meet the four survivors in quarantine. One is a rockstar. He’s also important. They’ve found something in the cargo hold – a huge coffin. Hint hint cough cough. It’s important to note that this is a post 9/11 book, and it wouldn’t be out of question to make certain parallels.

At the 40 minute mark, things escalate. Hold tight until then. It’s worth it. I would also venture to say that it’s when the del Toro nature of like, no holds barred monsters happens. It’s got that little like, Henson-quality gone completely insane? It’s obvious, it doesn’t sneak around, and it’s still terrifying because it’s abrupt. Physically, I am now on edge. From here on out, the minute-to-minute recap goes away. I don’t want to ruin anything else. 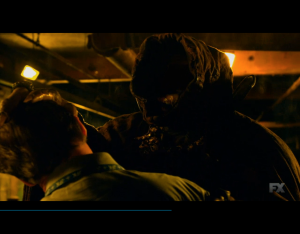