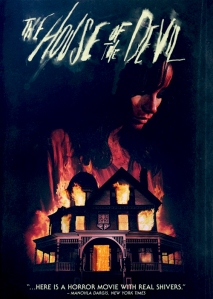 Baddie – Reality is a cruel mistress.

Lesson – Astrological events are not the best times to try new things.

I really really enjoyed The House of the Devil. Like, really enjoyed it. It manages to accomplish something that so many others attempt – genre horror within a different genre setting.

Our setting is extremely important, and we follow a young (18something) college girl in a familiar search to escape a terrible roommate. The opening scene exploits predictive horror and immediately sets the bar for tension as the camera slowly pans through a house to the back of the young lady, Samantha, prime bait for the classic turn-around scare. There is no pay off, and nerves are set on edge from this point out.

Everyone is either gratingly sweet or raw edged angst. The only character in-between is Samantha, a desperate but logical student, independent in her own right. This is very effective for placing the audience in her mindset, she’s the only sane one, the only relatable character. You can pull nuggets of truth from her environment, from her friends, relatable situations that are familiar. This is somewhere between the ‘horror movie stupidity’ that many characters suffer from, but it’s not quite the indignant and insufferable ‘know it all’ attitude of subversive characters.

The tension in this movie is largely, in my opinion, because there is never a point where I could smugly look on and say, “I wouldn’t have done that.” I would have done every single thing in that movie. I would have played it out as Samantha had, and I would have ended up in the same situation. And that is the genius here. Faced with a babysitting job that could help with her impending bills, Sam lets her judgement lapse – how bad could babysitting be? As it turns out, it could be kinda creepy, but really, it seems harmless in the end. The people are a little kooky, sure, but it’s a short night and they’re paying a lot. 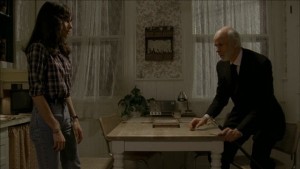 Now, of course not all is as it seems. You watch this movie on the edge of your seat, waiting for escalation. There is a brief payoff, but it’s so abrupt and isolated that it really only heightens the anxiety levels. And when it really starts rolling, well, boy, boy does it start rolling. It doesn’t jerk you around, your anxiety has not been for naught. The payoff is violent and fast and satisfying (in that sick kind of way that your brain demands resolution of some kind).

I should also mention that this is a ‘period’ film, set around the mid 80’s, which works both to distance yourself (no cellphones, etc.,) but also because a horror fan will sink into the familiar slasher-film territory of the 80’s and associate certain expectations. 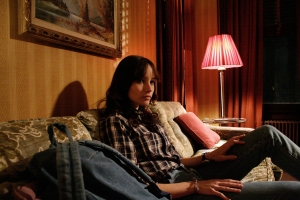 So that genre in a genre thing? The House of the Devil is a tense film packaged into a Satanist Cult movie. It’s great. Go watch it.