Despite the missteps in last week’s episode of Justified, this week’s seemed a bit more on track. Raylan and Boyd are still not interacting, but Boyd did spend the entire episode in Mexico, so that’s forgivable, I guess. Yes, Boyd is still in Mexico. After breaking his carefully constructed character to do something entirely against everything we’ve ever known about him (kill his cousin), Boyd settles things with the Mexicans and heads North with his posse, the drugs, and the dead bodies. They run into some trouble along the way, having to deal with some corrupt police officers, but settle that quickly. With help from Daryl Crowe’s Mexican contacts, they prepare to cross the border with about $300,000 of heroin. Classic. Right before doing so, though, Jimmy overhears a conspiracy between the Crowes and their Mexican friends, which would likely spell trouble for Boyd’s rapidly dwindling drug cartel. 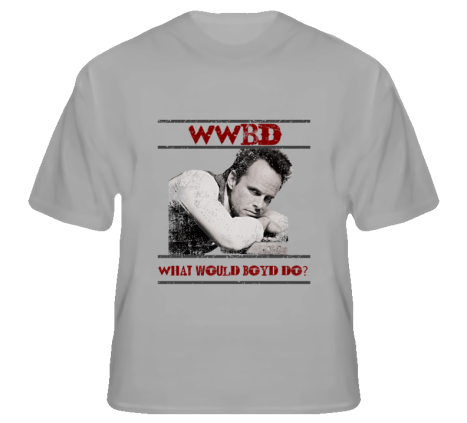 I’m not even sure anymore.
Source

In a shocking twist of events, Raylan’s storyline was actually better developed and more interesting than Boyd’s. Growing increasingly uncomfortable with his living situation and taking advantage of his brothers’ absence, Kendal Crowe decides it would be prudent to skip town with his uncle Jack, much to the consternation of his sister Wendy, who tries to convince Jack to bring Kendal back, but realizes the impossibility of this course of action when grumpy thug shows up looking for Jack, who is, unsurprisingly, something of an asshole. Despite the unfriendliness between Raylan and the Crowes, Wendy calls upon him for assistance in tracking down her son. Oops! Did I say son? Oh yeah, it turns out that “uncle” Jack is actually “daddy,” and “sister” Wendy is actually “mommy,” and “brothers” Daryl and Danny are actually “uncles.” Screwed up family, yeah?

Maybe a little screwed up.
Source

Anyway, due to Jack’s cowardice, the bad guy eventually manages to kidnap Kendal, and a ransom is agreed upon, overseen by Raylan. Once he hears the whole story about how Jack’s been skimming money from a card game and put a guy in a coma to save himself, Raylan decides to arrest both Jack and the thug. Later, Wendy and Kendal have a pretty awkward conversation, Wendy thanks Raylan with a fair amount of awkward sexual tension, and Raylan returns to Alison only to get awkwardly dumped.

In prison, Ava manages to secure a contact on the inside to bring drugs in. Her entire plan for survival of course depends on Boyd’s success in delivering the heroin.

No one seems to think that killing Johnny is really much of a big deal, which kind of bugs me. They haven’t put it to use yet, and so what I said last week about it still stands. It’s the kind of sloppy writing I would expect from a lesser show, so hopefully they’ll get some mileage out of it soon. I do take comfort in the idea that they have a plan to wrap up the season, and I understand that might mean that not everyone is going to get a satisfying conclusion. One other weird thing: no Wynn Duffy for the last two weeks. Jere Burns is a regular cast member now, but has been mysteriously absent for a while.