This, for the first time in a long time, is a review about how much fun I had in theaters. Oh my god. I have not relished in a movie like this for a long, long, long time. I giggled. A lot. It was just so much fun.

Movies like this help me clarify why I was so disappointed in something like Sharknado. It really depends on where my suspension of disbelief starts and ends that determines the validity of a movie’s entertainment value. If you can’t sell it, I don’t want to watch it. So, in the case of I, Frankenstein, let’s start with the premise. I am willing to buy the plot. Possibly because the mythology of Frankenstein, while not my favorite classic monster, is so thoroughly ingrained in my mind, and possibly because despite everything else the acting isn’t bad.

The actual plot of the movie involves Frankenstein being caught in the battle between good and evil, Demons and Gargoyles. I will say that the trailer does not do a good job of communicating this, and I totally thought that this was going to be a movie about an army of Frankensteins fighting Gargoyles. Either way, Gargoyles are tasked as holy warriors to drive demons back, to Descend them. “Descend in pain, demon!” is my new favorite insult. Bill Nighy is the Prince of Demons. He’d like to discover the secret to reviving corpses because then a demon can possess them. The corpse part is key, because demons can’t boot out souls, so, naturally, they need to figure out what makes Frankenstein tick. This begs the question of why they can’t just possess Frankenstein and make him do what they want, despite it being difficult to capture him and stuff. I don’t know. They also possess using a pentagram, which, y’know, keeps demons out. I can’t fault the movie entirely for this one, as it’s based on a graphic novel, but, they certainly changed other things.

Now, I had mentally been calling this movie “Sexy Frankenstein” for weeks before I actually sat down to watch it, and I was not disappointed. If you’re worried about it being the latest in the vein of Twilight or Monster High (a ludicrous line of horror-themed dolls), rest assured that Aaron Eckhart is not the sort of gent to cry over his scars. Actually, in a delightful twist, the romance portion is downplayed pretty severely, but more on that in a minute. This is a creature scorned by society but who willingly ostracizes himself after a moment of weakness in the face of revenge. It’s a little emo, I’ll admit, but there is a ton of ambiguity to Frankenstein’s motivation that actually works for the character.

Terra, played by the surprisingly not-annoying Yvonne Strahovski, is somewhat of an anomaly as far as horror films go. She’s a neuroscientist of sorts, heading a lab under Bill Nighy’s direction, and while she may cast an eye on Frankenstein and potential tension is definitely recognized, in terms of horror damsels, she’s one of the good ones. Similarly, the queen of Gargoyles, played by Miranda Otto, is a strong matriarch character. It’s a breath of fresh air. 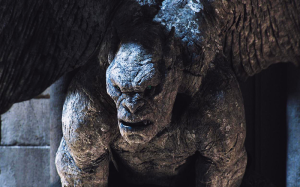 Not much needs to be said of Bill Nighy’s Demon Prince, other than he appeared to have an absolute blast doing it. I had a blast watching it.

I thought the SFX/creature design was well executed, and the costumes were solid. They did a nice, simple job. Everyone had one outfit, and that was all that was needed. Frankenstein had a slightly updated wardrobe, Terra dressed like an average 21st Century woman, and the Gargoyles channeled some Medieval awesome-ness. The soundtrack was fine, but ultimately not memorable unless you count me thinking it was by Hans Zimmer.

So, after an hour and a half of needlessly exciting fight scenes, campy dialogue, and Aaron Eckhart’s best sultry voice, I left the theater giggly. This movie is a great deal of fun, I really can’t emphasize that enough. Don’t take it seriously, but don’t expect a generic SyFy ‘so bad it’s good’ annoyance, either.