This week on Justified: stuff happened.

I think I’m going to maintain last week’s structure of focusing on Raylan and then on Boyd, rather than intercutting as they do in the actual show. It was just way more convenient for summary purposes. Sadly, that means that as of episode two, Raylan and Boyd still have yet to share scenes.

Justified, despite having short seasons of only thirteen or fourteen episodes, likes to take its time to develop conflicts, which is a good thing, by the way. The episode doesn’t kick off where the last one left off, with the Florida Crowes heading up to Harlan to cause Dewey some trouble. No, that doesn’t happen until towards the end. This week begins with Raylan, Rachel, and Tim on a fairly routine visit to a mobster’s house. We’ve seen this one before. The marshals investigate a few things, arrest the mobster, and take possession of his home and everything in it until their investigation is complete. Raylan’s happy-mobster-busting-time is interrupted when he receives a phone call from local police regarding some teenage pot-dealer bandying around his name. So, he takes the mobster’s incredibly nice car and speeds off. 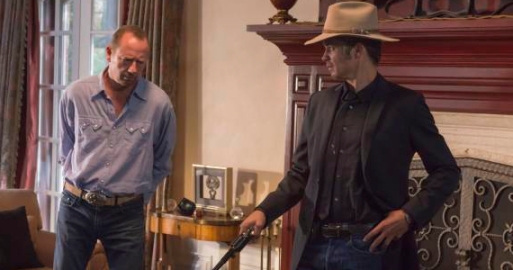 FX
These belong’a me now.

Raylan arrives at the police station to discover…wait for it…Loretta McCready (Kaitlyn Dever). Why yes, y’all remember her, don’t you? Like Dewey, Loretta was absent for all of the fourth season. We haven’t seen her since early season three, in which she was hardly that important. No, we’re looking back all the way to the second season for her. Remember how Mags Bennett (Margot Martindale in an Emmy-winning role) murdered Loretta’s father and absorbed his weed business, whilst unofficially adopting Loretta as the daughter she never had? And then remember how at the end of that season…things don’t turn out excellently for the Bennett clan? And then remember how Raylan sort of takes young Loretta under his wing, having previously saved her life a few times, and helps her out as she adjusts to foster care? Well, evidently, none of that had much of a positive influence on Loretta’s teenage development, and she’s taken to dealing weed with her boyfriend Derrick (Riley Bodenstab). Upon reflection, Raylan decides not to abuse his power to spring Loretta, but leave her in the lockup with hopes that she’ll learn a lesson. Ever hoping to improve her life, though, he decides to hunt down Derrick and talk him into breaking up with her. On the way out the door, he encounters Loretta’s intriguing blonde social worker (Amy Smart).

Things get a bit…complicated, when Raylan finally tracks down Derrick only to find him in sort of a damaging position with two goons. The goons, by the way, are really superbly written. They’re your classic Elmore Leonard mobsters, the kinds you’d expect to see in Get Shorty or something. Anyway, Raylan gets the goons to scoot and says what he has to say to Derrick and returns back to Marshall headquarters, where his Chief Art is having conversation with one of my favorite recurring guest stars, Assistant District Attorney David Vasquez (Rick Gomez). Raylan interrupts and Vasquez asks him about the car he took. Rather than getting Raylan in yet more trouble, he encourages Raylan to occupy the mobster’s mansion for a little while. Why not?

Art has troubling news, though, filling Raylan in on Sammy Tonin’s death, which y’all may remember occurred in the last episode. Raylan is surprised, but what unnerves him is that Sammy called the Marshal’s asking for Raylan while the latter was in Florida. Oops, could this possibly place our beloved U.S. Marshal at the site of Nicky Augustine’s untimely demise? Art has his suspicions…

Anyway, Loretta shows up, afraid because Derrick has gone missing. She and Raylan track him down as he desperately tries to find a suitcase of money they buried (which Loretta moved without telling him), while the two goons from before hold him at gunpoint. Raylan arrests the bad guys, learning that they’re interested in the money because Loretta and Derrick sort of…stole it from Memphis Drug Lord Hotrod Dunham (Mickey Jones). Again, oops. Raylan calls a meeting with Dunham and, using his badge, gun, and trying really, really hard not to show how incredibly pissed off he is, manages to sort everything out. Later, he drives Loretta home, attempting to impart some form of wisdom along the way.

Meanwhile, though, things go from bad to much, much, much worse for poor old Boyd Crowder. Remember how Boyd sort of beat to death one Lee Paxton, but offered to pay Mrs. Mara Paxton (Karolina Wydra) $100,000 to keep it quiet? Well, Paxton’s not actually dead. He’s just in a coma. And Mrs. Paxton just jacked up her price to $300,000, money which Boyd doesn’t have because he’s still waiting on his heroin shipment from the Canadians.

Crooked Sheriff Mooney (William Gregory Lee; never trust a man with three first names) has high, high hopes of putting Boyd behind bars, and intimidates, threatens, and acts super creepy towards Mara Paxton in an effort to get her to give up Boyd. For the moment, she’s not saying anything, though.

How do things get worse for Boyd? Lee Paxton wakes up. Oh damn.

How do things get even worse for Boyd? His dealers are growing reckless and potentially mutinous.

How do things get even, even worse for Boyd? Ava is still behind bars and it looks as though Boyd is not going to be able to get her out.

How do things get even, even, even worse for Boyd? Someone shot up his shipment from the Canadians and stole all the heroin. Dayum. 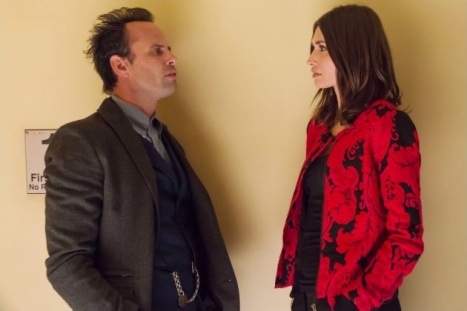 FX
Boyd, when do these conversations ever go well for you?

That’s it for this week’s episode. It looks like next week is going to bring us a lot from the Crowes. Still, no one seems concerned about Johnny Crowder. In other news, FX has confirmed that Justified will be returning for a sixth season, but that number six will be the final season. Personally, I’m happy to hear this. Apparently it was a decision that show-runner Graham Yost and Timothy Olyphant came to after plotting out the whole arc.

One thought on “Rooster Recap: Justified Season 5, Ep. 2: “The Kids Aren’t All Right””