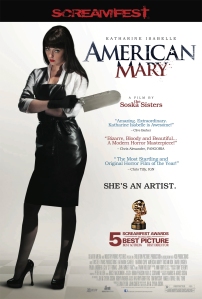 Baddie – Student loans, AM I RIGHT?

Lesson – Surgeons are, and always will be, terrifying.

I think I’ve said it before – but most of the movies I review for this column are available on Netflix. This works for my theme (weird/terrible/sometimes fantastic horror & scifi movies) because there are a ton of movies on Netflix that are underrated. I think that American Mary is one of those movies.

Picture a med student struggling her way through school. She’s somewhat of a prodigy, fascinated with surgery and anatomy, but like many students, she’s strapped for cash. Desperate to stay in school and achieve her dream, she prowls ads until finding one for dancers and decides to audition. During the audition, someone bursts into the room and an emergency is happening. The owner takes a gamble, having lucked out that his current audition is training to be a surgeon, and asks her to help out a man on the table who’s about to die. Mary agrees, for cash, and thus begins her spiral into the body modding community.

The biggest issue I had with this movie initially is that, y’know, I -am- a starving grad student, and my apartment is hell of a lot smaller, and I can’t afford fancy lingerie (or other fancy garments), that’s for sure. After finishing the movie, the biggest issue I had is that there are a lot of partially developed plots. The fact that the strip club owner tortures people in his basement occasionally, or the revenge plot on her doctor mentors, or her relationship with the strip club owner, or the eventual issue that leads to the end of the film.

I’m also going to get on my little soapbox for a half a second, because there’s a part of this movie that doesn’t quite sit well with me, having to do with one of those partially developed plots. Bear with me for a second –

There’s been a lot of literature about proponents of rape culture in American mainstream media. Most recently, I wrote about the sexualization of a lesbian character in the Riddick movie (a view backed up by The Mary Sue, which is a blog you should be reading) in a movie that had no need for that kind of victimization. So when Mary gets date-raped by her professor at a party, I was confused. Mostly because the movie purely did not need that sort of villainizing – we already know the professor is a bad guy, but also, the revenge plot is tired and superfluous.  Sure, the main professor is a little bit…abrasive, even for the ‘tough professor’ trope, but here the motivation is that Mary drops out of med school. For this, the rape scene works, I won’t pretend it doesn’t do it’s ‘job’. I’m just saying that the scenario depicted is a frazzled med student who gets addicted to playing God with other people’s bodies for large sums of money. The revenge thing isn’t necessary. (Note: This film was written and directed by women, by the by.) 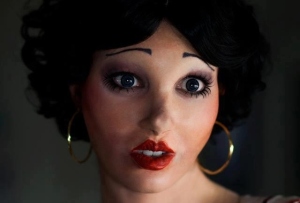 Now to the good parts. This movie is a prosthetic artist’s dream. It’s a film about body modding, right? So, there are tonsssss of makeups to be done (and possibly some real mods? Who knows), and those makeups are often somewhat complicated. There is only one marked instance of ‘poor’ prosthetics, and it’s simply that a character is hanging by his back by hooks. The hooks are clearly inserted into (well painted) latex skin that appears to have been molded into that shape. As a result, the physical practicality isn’t there, but the skin doesn’t rebound when the hooks are released.

My favorite part of the movie is probably Katherine Isabelle, who plays Mary, because she moves through the movie with a pretty decent range of emotions like a total boss. Also because she manages to rock lingerie and a black apron, or a sick black coat and pencil skirt, or red scrubs. I’m also pretty convinced she’s the child of Zooey Deschanel and Tara Reid? She kinda talks like Tara Reid, but I don’t hate it.

If you’re in the mood for a tiny bit gory but not entirely ‘scary’ horror flick, I highly recommend American Mary. It’s billed as a slasher-flick, but I wouldn’t say that it’s under that category. It’s more like a psychological thriller like Hard Candy or even Teeth. It’s a bit fun though, like Repo! The Genetic Opera.