Lesson – Nobody move – there’s a good sequel lurking around here…

HAPPY FRIDAY THE 13th EVERYONE. Enjoy a double dose of review!

The Collection has been hawked by Netflix in the ‘most popular’ queue for a while now, so I decided to check it out. I have to say, I was not disappointed. I was slightly disappointed to find out that this was actually a sequel, but, it doesn’t really matter what order you watch these movies in. I watched them backwards, and I survived. I’ll review them in order though, to save you all the agony.

Did anyone else watch The Purge? Because, honestly, I would probably choose The Collector over it any day. There’s a similar basic premise, where someone enters a home and then has full domain over it and its residents. Yes, The Purge has a bizarre backstory and a lot more suspense before the ‘action’, but, for me, that’s not quite enough. Then again, I really like gory horror flicks, so, there’s that.

I enjoy that this is a torture movie that relies heavily on implications. Don’t get me wrong, it has a healthy dose of ‘Noooo no no no no no no no nope.” moments (see: my dental phobia). However, as I’ll re-iterate about the sequel, these movies seem to be a good balance of action violence/character/mishaps/smarts/torture/blood/Instagram filters.

LD Entertainment
I get weird ‘Firefly’ reaver flashbacks from this still.

All things considered, I actually think that this is a rare case where the sequel is a huge improvement, which is great, because I also enjoyed The Collector. It’s a very similar movie, but Collection takes the scale up. More people, bigger set, etc. Also, the Collector growls less in the sequel, and that’s good. Growling is weird. 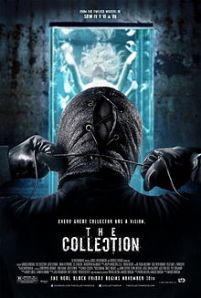 The premise of the movie (Collection) seems pretty simple. Take one part deranged maniac, one part slasher flick, two parts vigilante revenge and a dash of torture-porn, and voila! A decent little movie. A town is ravaged by a serial killer who has no rhyme or reason for his kidnappings, but his missing count is over 50. That’s a TON of people. On an unrelated note, our heroine has been cajoled into going out dancing with a friend and the friend’s brother.

Most movie-going audiences fully expect the lady to get kidnapped at the dance club, and, to be fair, that is what happens. However, not until a BUNCH of crazier stuff goes on. You know that scene in Ghost Ship? I wager that even if you haven’t seen it, you might know of the infamous guillotine wire + ballroom dancing scene, where a bunch of people are mass-eviscerated/decapitated? It’s infamous for being utterly ridiculous in a movie that’s already prettttty ridiculous.

Well, The Collection takes that up about forty notches. It’s one of the highest body counts I’ve ever seen in a short scene (see: Piranha:3D and Spring Break Shark Attack) and it culminates with Elena’s kidnapping but also an escape from the current victim!

From there, well, it gets crazy. In a great way. Okay, so, torture films aren’t really my favorite, and there are some moments that made me a little queasy, but really, it’s not intense. I would wager to say it’s not as bad as Hostel, and I put it somewhere around Wolf Creek status.

The brilliance of this film is the immersive world of crazy the Collector has built into the abandoned hospital where he works. It’s suspenseful and full of danger – but the best part is that the actors make educated decisions (without explicitly stating that they are doing so) that make total sense in the situation and they still kinda get boned. This is a difficult situation, and no matter how smart you are, it’s still a sticky wicket. 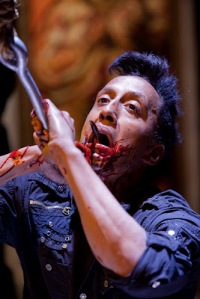 I really enjoyed the use of prosthetics and SFX. As a movie, it didn’t really lean too heavily on any one factor, by which I mean some films rely on the blood, or the acting, or the building, or the ‘jump out at you’ scare, the gross-out scare, etc. It seemed really balanced. That being said, the ending is somewhat unsatisfying, and the lack of explanation regarding the Collector himself, his reasoning, etc., is infuriating for audiences who want answers (me, I want answers). I did like his little hood thing, because it’s not, y’know, a Gimp mask. It’s a hood. It’s simple.

Actually, I think that there might be sort of a missed opportunity for a decent horror villain. Well, I say missed opportunity, but it may very well have been intentional, which I get. By this I simply mean that Freddy Krueger, Jason – they have groupies, and a following, and they get a tad bit campy because of the iteration. The Collector isn’t really able to do this, because he works in mysterious ways. Given the newfound ferocity of the Hannibal fanbase, I don’t blame a director who might try and avoid this kind of character. However, it also affects plain-old character development, so, there’s something to be said for that.

To the surprise of no-one, when I looked to see what the director, Marcus Dunstan, has also worked on, I noticed that he was a writer for the last few Saw movies and worked on Piranha 3DD (different from Piranha 3D). He’s rumored for The ABCs of Death (2) so I’ll be looking forward to that. The ending of this movie was ambiguous enough to warrant another film, but Collection was so grand-scale that I’m not sure where it could go. I’ll also bet money it’s called like, Collected or something zany.