It becomes necessary at times, with the speed and tenacity of modern day life, to simply sit back and listen to the music once in awhile. I find my generation’s music, from twangy country to meaningless, repetitive party tunes, to be just awful. No explanation can help me understand why kids don’t know that “Behind Blue Eyes” is a song by The Who, or that some albums actually have a greater meaning than just about how drunk you frequently get on weekends.

Pink Floyd’s The Wall was the culmination of a great deal of hard work by longtime Floyd member and lead vocalist Roger Waters. Writing the music must have been a task, and making sure fellow band member David Gilmour had as little input as possible in the project must have taken some serious effort, as well. The film adaptation of the famous double album was considered the first major step in the breakup of the Band, as Waters pushed more and more of his own material over Gilmour.

The film is one of a kind. It amounts to, at its most basic level, a ninety minute long, unrelenting music video about the social and psychological barriers mounted between a rock star (Named Pink Floyd) and those around him. His wife, who has become tired of his emotional vacancy, leaves him and begins his spiral into complete and total insanity.

The uniqueness of the film is not the message, but the delivery. The music, like all Floyd is spectacular, but the visualization allows the band to paint an even more vivid picture. The story loosely follows the personal struggled of early band member Syd Barrett, who was the lead vocalist for Floyd during a much more lighthearted, poppy time in the band’s history. He spent much of his later life in and out of treatment for mental illness. It is believed by many that this album, as well as popular Floyd track “Wish You Were Here” are about Syd.

Do not expect this film to be a lighthearted affair. Roger Ebert compared it to The Who’s very powerful but very dark concept album Tommy, and Waters himself described the film upon its completion as an “Unremitting onslaught upon the senses.” Even if you’re not a fan of the band, or a fan of music for that matter, this is one of the films you should watch before you die. What Waters and company show in music and visuals cannot aptly be described in words, and the strong visuals of the film, from brainwashed children to fallen soldiers to the bombing of England and its eventual allegorical control by a fascist party, will not easily be forgotten. 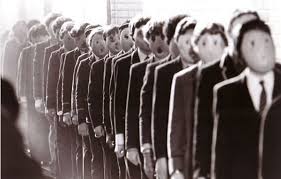 This one holds a special place for me, and It’s a shame because my earlier written review did it a bit more justice. Unfortunately I lost the file, but the best advice I can give in lieu of a proper endorsement is to simply implore the reader to watch the film. It shouldn’t be too hard to find.