Well, this is it. This is Evil Dead week. (Contains SPOILERS, proceed with caution)

The Story: Old story involved teenagers busting into a cabin that wasn’t theirs. New story involves teenagers going to a cabin to hole up while Mia quits heroin cold turkey. This is great, because it a) makes it so they can’t really ‘leave’ and b) makes it so that Mia loses all credibility when she sees weird things. From there it gets a little iffy. 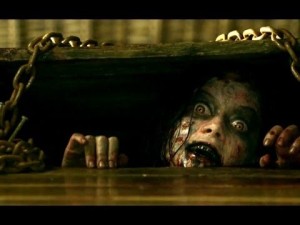 There are a lot of tie-ins to the older movies, obviously. The movie starts with a demonic exposition which I honestly found completely unnecessary. Actually, there is a lot of ‘explanation’ plot that is trash, and somewhat distracting. The Evil Dead franchise isn’t particularly confusing, and there are elements of ‘unknown’ that made the original alarming. The remake sort of takes parts of that away by explaining the Necronomicon in bigger detail. The explicit statements about Satan and souls was weird. Characters are more aware and there are less consequences.

The Effects: I found the effects to be a pretty even blend of old and new. The CGI was minimal and/or masked with blood, and not distracting for me. The possessed are less flaky than the old. Actually, the original series had a lot of latex/tissue/paper towel in it (It’s a really good technique for quick flesh, by the way. Take it from someone who had to do five+ zombie makeups in an hour).  The possessed hand in the kitchen was the most clearly reminiscent of the original films, and that girl puts her prosthetic under running water and squeezes pus out of it. The makeup artist in me had a little squee fest. It was very cool. 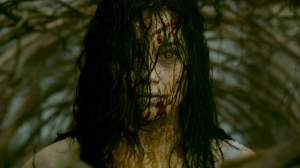 Tri-Star Pictures
This is ‘tame’, believe it or not.

The Scare Factor(s): As expected, there were two major scare tactics: “Jump out at you,” and “this is gross”. These things were good. I never failed to jump, and there were a lot of things that made my stomach churn. However – I feel that this Evil Dead had a lot of missed opportunities. One of the best aspects of the original is that nothing was certain and the demons are determined. Basement demon is constantly berating them, popping up, singing, etc. This almost never happens. Olivia dies, but isn’t ‘cleansed’ or anything, and by all means should have popped up at an inconvenient time, bashed-in skull and all.

The Homage(s): I have mixed feelings about the level of references. On one hand, they were great. On the other hand, they really brought me out of the film. Some were more subtle than others, too, but all were pretty good. I wanted more of some, less of others, etc. This film also references all three films (Basement water scene, I’m talking about you). The chainsaw made me happy, as did the moment that Eric laughed for about five seconds. 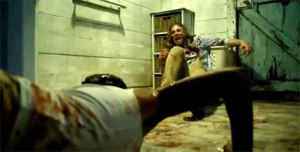 Minor pet peeve: This movie used a lot of Exorcist style cursing from the demons, and for me, it feels silly and not scary. Now, I can be a bit tight-laced, but I don’t think that’s the reason. This is not a complaint about the real language, because let’s face it, if I was fighting demons, I’d be cursing like a sailor too.

Final Verdict: This was an awesome reboot with some minor faults. Was it the ‘Scariest Movie I’ll Ever See’? No. Was it scary? Yes. Was it funny? At times. Sometimes it was a little dumb, and there was a fair bit of ‘get out of jail quick’ cards written in (see: house explosion). The ending was great, and it was a nice little journey. So, yes, go and see this movie. Enjoy it, and respect it’s elders.

Also, if you don’t stay for the clip after the credits, you’re a moron and you’ll miss one of the best parts.