I don’t know if you all know this, but the NEW EVIL DEAD IS COMING OUT SOON AJOFIJWEOIFDJSLDSKW.

1) I will watch a movie all the way through once I have started it.

Evil Dead is obviously a cult film, and I can’t go in and actually analyze it.  That would be silly, because it isn’t a serious film. The new one, though, is very much so meant to be serious, and it looks TERRIFYING. I’m going to see it when it comes out, and review it. However, I’m going to lead up to it with two film reviews that are clearly inspired by the Evil Dead franchise. Tucker & Dale vs Evil and, next week, Cabin in the Woods.

Buy this on Amazon!

So, without any further ado, Tucker & Dale vs. Evil. I think that this movie is super underrated. I didn’t want to watch it originally, because it’s a tricky thing to bill. I had no idea going into it the first time that it was a subversive movie, and that it was awesome as hell.  This movie is so darn clever.

Maybe you’re as clueless as I was, so here’s the skinny: Alan Tudyk (Wash!) and Tyler Labine (Sock!) play some, erm, ‘Backwoods’ gentlemen on their way to go and fix up a cabin they’ve just purchased as a vacation home. College kids decide to go camping the same weekend. Misunderstandings ensue, to the entertainment of the audience.

If you’re thinking this is a transparent ‘don’t judge a book by it’s cover’ plot, well, it kinda is. But it’s done in such a way that it isn’t irritating almost ever. Tudyk and Labine have an adorable bromance, and, while I’m already a Tudyk fan, I love him so much in this movie. It’s just so darn giggly and delightful.

Reliance Big Pictures
This is the face only a Whedon fan could love.

So, some spoilers here, but basically all the college kids misjudge the two hillbillies and then get overly paranoid. The leader of their pack, a douchey white kid (aren’t they all?) ups the paranoia factor by about ten by being super creepy.  Circumstances lead to the primary blonde being rescue/kidnapped, and that’s where the real shenanigans begin. 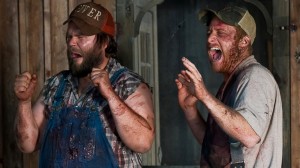 If I had any complaints about this movie, it’s simply that the last third is a bit strange. This is unavoidable, because the bumbling misunderstandings can really only carry the plot so far, and I think the way it’s handled is okay. Still funny, very entertaining, but a bit rushed and definitely weaker than the first half.

Alan Tudyk, God bless him, absolutely gets the brunt of the abuse in this movie. Seeing as I’ve seen him as the loveable Wash (Firefly), a calculating psychopath (Dollhouse), genuine buddy (Knight’s Tale) and a goofy relative (Death at a Funeral), it was weird but refreshing to see him in this role.

Now, the only other notable thing that Eli Craig has directed is Space Cowboys. I would like it if he directed more. This movie is a perfect homage wrapped in cleverness.  There are a lot of references to other movies, but it really tries not to hit you over the head with them. If it’s obvious, an explanation is written in, which is really where the success of this film is.

This film is largely underrated and under-seen, but I really can’t recommend it enough. If you’re new to the horror genre, it’s a funny introduction. If you’re a veteran (or anywhere in between), it’s one of the best homages I’ve ever seen.