So, dedicated reader, perhaps over the months you’ve thought to yourself, “What kind of guy is this author of Second Breakfast?” Then again, maybe you haven’t. If you have, then it’s time to celebrate. All is about to be answered! Sure, I’ve talked a little about myself in some past articles, when appropriate, but I’ve never painted you a full picture. I’m not going to tell you everything, but I am going to give you one little piece of information that should prove very illuminating. I, dear reader, am something of an introvert. Surprised? I watch movies, often alone, and then I write about them. Though introverted, I’m not antisocial. I have a few great friends, but I just prefer to operate in small groups; that’s all. I like these people I call friends, and I enjoy going out with them. There is one downside to having only a couple friends, though. What happens is that sometimes, none of your two or three friends feel like doing anything, and then what happens? What do you do all on your lonesome? You turn to Netflix, and then…

The Plot: Mia Farrow is shocked and upset when she discovers that she is the last unicorn in the world. What happened to the other unicorns? Did they die? Did they just forget to leave a note? No, it seems that a mysterious Red Bull (that can’t be a coincidence) herded them away to the castle of King Haggard (Christopher Lee, if you can believe that). So, Unicorn decides to join forces with Schmendrick the Magician (Alan Arkin, officially making this a star-studded cast) on a quest to rescue the other unicorns. They encounter outlaws, talking skulls, a pirate cat, Angela Lansbury, and also Jeff Bridges sings a corny love song. To recap: A unicorn and a magician go on a quest to rescue the other unicorns from an evil king. Starring Mia Farrow, Alan Arkin, Christopher Lee, Jeff Bridges, and Angela Lansbury. 1982.

Unicorn: “A butterfly told me of a Red Bull, who pushed all the other unicorns to the ends of the earth, and Mommy Fortuna spoke of a King Haggard, so I’m going where they are to learn whatever they know.” – An actual quote and more efficient plot synopsis

Rankin/Bass Productions
This butterfly is even less helpful than the one in All Quiet on the Western Front.

All right, where to begin? I have just so much to say about The Last Unicorn. So, our main character, the unicorn, has, to quote Rooster Illusion himself, “Less personality than cardboard.” In a truly fascinating turn of events, none of the characters are even slightly interesting. Motivations are hazy, but not in a deliberate film noir kind of way. The audience is never sure why anyone does what they do, because the characters are never sure themselves. Now, I understand that a certain level of criticism should be reserved only for grownup movies, and that films for children have different goals and objectives, but I don’t think I’m being unfair right now. Character development isn’t hard. It really, really isn’t.

Where the characters are bland, the rest of the movie is just plain confusing. That’s it! Confusing is the adjective I’ve been searching for to describe this movie. The series of events that accidentally forms this plot just doesn’t go together at all. Let me break it down for you. This is going to contain a lot of spoilers, so if you really care about that, skip the next paragraph.

The Plot 2.0: Hunters in woods discuss how there aren’t any unicorns left; a unicorn hears them, suddenly realizes that she hasn’t seen any other unicorns in a really long time, and feels sad. A singing butterfly appears, sings nonsensically and anachronistically for about three minutes before finally telling the unicorn about a Red Bull that drove the unicorns to the sea, so the unicorn embarks upon a quest. She’s picked up by Angela Lansbury, an evil hunchback, and Alan Arkin, who host a carnival of oddities. Alan Arkin decides to set the unicorn free, so she escapes, frees the other animals, including a harpy, which is built up as this really important, really evil creature. The harpy kills Angela Lansbury and the evil hunchback and then flies away and we NEVER SEE IT AGAIN, despite how important they made it sound. 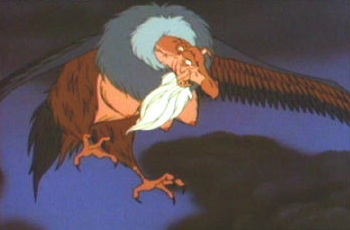 Then, Alan Arkin decides to help the unicorn on her quest. It’s not long before they’re kidnapped by bandits, but Alan Arkin is a magician, and he tricks them with illusions of Robin Hood. The bandit king gets mad and ties him to a tree, and leaves, and we NEVER SEE HIM AGAIN, despite how important they made him sound. The tree then for some reason transforms into a giant boob monster and starts molesting Alan Arkin (like in The Evil Dead, a movie that was rated NC-17 when it came out, and this is a kid movie).

The unicorn rescues him and they escape, only to run into Molly Grue, one of the bandits who, quite literally for no reason at all, decides to join them. She leads them to the castle of King Haggard, where they are attacked by the Red Bull, which is only concerned with unicorns. Knowing this, Alan Arkin casts a spell that turns the unicorn into a human and the Red Bull goes away. Now, because the unicorn wasn’t wearing anything, neither is this human girl, marking the sixth and final boob we see in this movie despite the fact that it’s for kids. 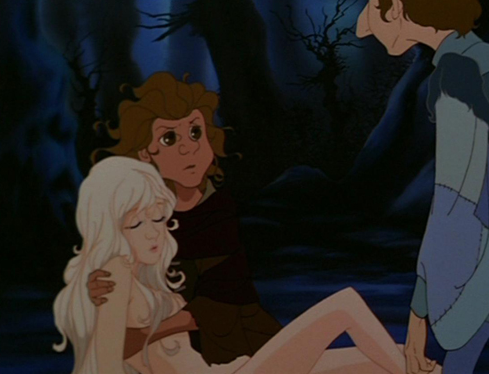 Anyway, they go up to the castle where the meet Christopher Lee and his son, Jeff Bridges, who is basically exactly the same character as Jeremy from Phineas and Ferb. Jeff Bridges falls in love with the human unicorn and they sing songs about it. Christopher Lee admits that he is obsessed with unicorns. He allows the gang to stay at his evil castle, and even fires his super evil, super powerful court wizard to replace him with Alan Arkin. This evil wizard vows revenge and then disappears, and we NEVER SEE HIM AGAIN, despite how important they made him sound. And then some other shit happens, but I’m tired of writing this. 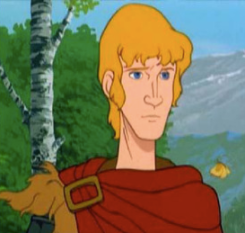 Rankin/Bass Productions
They are the

I know that was unnecessarily wrong, and that this article is almost as confusing and directionless as The Last Unicorn, but I feel like I’m being thematic or something. The animation is just as confusing as every other element of the film. It’s inconsistent and kind of smudgy, like watching “Baman Piderman,” but it’s not meant to be like that. On top of that, the audio all seems really distant. And the songs! There are so many songs! First, it’s just songs performed by the band America, placed over needless montages, but then, in the last half hour, there’s a song every five minutes, because everyone suddenly discovered that they have feelings, or, more likely, someone told the director that his movie was forty minutes too short and he had to flesh it out somehow.

I guess, to wrap up what has become a needlessly long and rambling review, I’m so glad that I wasn’t exhausted or sick or drunk, because The Last Unicorn already felt like a bad fever dream.

4 thoughts on “Second Breakfast Makes Yet Another Regrettable Decision”