Ed. Note: Hey, all. James here. This is the debut of our new writer, Bryan Sibbitts. Where did he come from? What does he want from us? Only time will tell. For now, maybe just search for clues hidden in his review of Moneyball. Perhaps every capitalized letter spells out a message or something. Who knows? What I do know is that Bryan is a welcome member to the team. Obviously. Why else would he be writing for us? 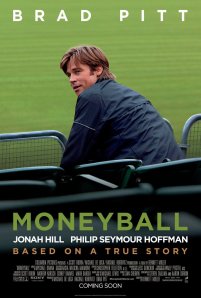 “It’s hard not to be romantic about baseball.” -Brad Pitt
You can own this movie!

Plot: After losing in the League Championship game, Oakland A’s General Manager Billy Beane (Brad Pitt) must put together a playoff contending baseball team…with basically nothing. As Beane puts it: “The problem we’re trying to solve is that there are rich teams and there are poor teams. Then there’s fifty feet of crap, and then there’s us. It’s an unfair game.” Little did Billy know, all of his problems would soon be solved. Billy meets Peter Brand (Jonah Hill, the fat version). Peter explains the theory of Moneyball to Billy, and he completely buys it. After hiring Peter to be his assistant GM, the two get to work on constructing a team with very limited funds. Will what they’re doing work? Or is it just a mathematical theory that has yet to really prove itself?

Baseball; America’s Pastime.  The fans, the grass, the hotdogs, the beer. There is so much unseen art that comes to baseball. Fortunately, I have had the great privilege to see about 10 Major League Baseball games in my life. Even if you don’t like baseball, go to a real game and see if your opinion changes.

What a sight, eh?

“But dude… I don’t like baseball. I’m not going to watch this movie” Well, to tell you the truth…you’re un-american if you don’t watch this movie! And it’s based off a book. And you will be missing this sexy piece of man as well!

Those buttons are about to bust… WATCH OUT!

I am not the biggest Brad Pitt fan, but this movie definitely bumped his score up a couple points in my book. Pitt portrays a divorced husband, an enthusiastic father, and a professional general manager for a mediocre baseball team. The development of this character is tremendous. A flashback to 1972 shows us an 18-year-old Billy who is being scouted by the New York Mets. At the end of high school, he is offered two options. Behind door #1 is a full ride to Stanford. Behind door #2 is a contract (with a signing bonus) to play center field for the New York Mets. As the responsible 18-year-old boy that he is, he chooses door #2. Wait, what? The college kid in me is screaming: “BRO…are you kidding me? A full ride to Stanford!” But the 18-year-old kid in me says: “Fuck school, I’m going to go play some baseball.” After about 10 seasons of just utterly horrible playing, being traded from team to team, he lands his GM job in Oakland. Billy was just a prime example of a player who was taken on a whim, on a guess, and just didn’t pan out. Few scouts can go into the mind of a young player and accurately predict his future. Pitt does a great job not only portraying the complicated life of a small market GM, but also has this small hint of the mistakes in his life that have gotten the best of him.

Jonah Hill plays the character of Peter Brand. Peter is a graduate of Yale University (with a degree in Economics), who somehow lands a job with the Cleveland Indians. After Billy discovers his hidden baseball statistics methodology, he hires Peter to be his assistant GM. Peter is relieved to finally have someone understand his thinking and mathematical knowledge.

Have I convinced you yet?

Billy signs, as Peter describes it, “a roster of misfit toys.” A pitcher who throws funny, a catcher who has thrown his last ball behind home base, a 38-year-old player who just wants to still be in the game. But all of these were for a reason: They can get on base. Coach Art Howe (Phillip Seymour Hoffman) doesn’t agree at first, and Billy decides to make some huge decisions in order for Coach Howe to play the lineup the way they should be played.

If what I’ve said hasn’t hit you at all yet, then let me leave you with one last thought. This movie is BASED ON A TRUE STORY. Cue the oOoOhs and AhHhHs. The whole theory of Moneyball is based on a book a man named Bill James wrote. He never played baseball, never managed it. He actually worked as a security guard at a Pork and Beans Factory. No one wanted to really give him a chance to prove his theory, until Billy and Peter come along. The whole conflict this theory faces is based on one central thought: it’s not how the game is meant to be played. This game is based on skill, risk, taking chances no matter what the odds. This game is based on over 100 years of thinking, scouting , and experiences.

Needless to say, sports fan or not, I strongly suggest this movie. Pitt and Hill do a great job together. Both actors not only complement each other personality-wise, but also humor-wise. Pitt brings this “I’m better than everyone” attitude to the table, while Hill brings this “I know what I’m talking about” nerdy humor. This movie is a pretty accurate look at the inside world and business of baseball. How to haggle, how to be a GM, how to create a winning club with nothing.

Now I won’t spoil this review and give away the ending, but it is both unexpected and coated with a silver lining. An outcome you didn’t want to see happen, but an outcome that you can live with. There have also been rumors of a sequel. My only huge problem with that is the complete difference in weight of Jonah Hill. He’s looking good these days….like high school senior good!