As I rapidly approach Thanksgiving break, the homework load [read: stress level] is mounting steadily. That gives important context to this week’s review, why I haven’t been to the movies in a while, and why I haven’t eaten vegetables in a while. So yeah, I’ll review a pleasantly low-key movie. 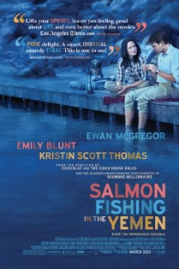 Salmon Fishing in the Yemen (2012, as far as any of you are concerned)

Verdict: Once again, better than Predator 2. I am seriously considering a new gimmick.

The Plot: Dr. Alfred Jones (Ewan McGregor) is a fish scientist, though I imagine his official title is somewhat fancier. His quiet work life and doomed marital life are both disrupted when he receives an email from Harriet Chetwode-Talbot (Emily Blunt), writing on behalf of the Sheikh of Yemen (Amr Waked), who wants to introduce the sport of salmon fishing to his country, hence the title. Now, bear in mind here that Ewan McGregor is a fish scientist, and as a fish scientist he knows quite a lot about fish, such as the fact that salmon cannot survive in hot, Middle Eastern climates. Unfortunately for him, the British government (Kristin Scott Thomas) desperately needs some positive Middle East-related publicity, and has chosen this project to generate it. Conflicts involving fish, terrorists, and office romances arise. 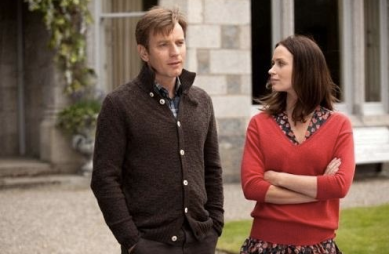 This is, as I said, a really low-key movie. Even the few really dramatic moments are handled quietly and are whisked away before they cause a scene like my brother did that one time in a restaurant when he broke it off with his third ex-wife for the second time. I love a quiet movie; it’s refreshing, but it can be hard for a quiet movie to not be too quiet, especially a quiet movie about fish. So what worked so well for Salmon Fishing in the Yemen? Mainly the performances

To start off, I’d just like to say that I love both Ewan McGregor and Emily Blunt. McGregor is best when he’s crying or singing, and although he does neither in this film, he does get to speak with his native Scottish accent, without the added pain of being a heroin addict (see Trainspotting). They both give really solid, understated performances. Those performances are the only things that lend any semblance of plausibility to their characters’ relationship. It’s rare for actor’s to be able to pick up a script’s slack, but McGregor and Blunt pull it off. They’re the leads, but their characters are really the least interesting ones in the story, and yet I was still able to get involved with them and care about them. It takes some combination of the words “good,” “excellent,” “actor,” and “director” to pull that off. Arrange them however you like.

The script didn’t fall short everywhere, though, it’s just that the most interesting characters were secondary. Kristin Scott Thomas’ cynical, biting government stooge just trying to do her job is a refreshing take on what could just as easily have been a stale archetype.

GOVERNMENT STOOGE: I know it’s stupid, but the government needs you to do it.

KRISTIN SCOTT THOMAS: I know it’s stupid, but the government needs you to do it.

I understand that on paper, those two examples aren’t all that different, but the variation is there once it’s played out.

Another really interesting character is Harriet’s boyfriend, Robert Mayers (Tom Mison), who’s only in a few scenes. He’s an army bloke and goes MIA in Afghanistan, causing all of Harriet’s emotional turmoil. Despite his relatively sparse role and the fact that he’s really just a plot device, he’s a fully fleshed, well-rounded, likeable character. That’s rather unusual.

The best character, actually, is Sheikh Muhammad. This is the Sheikh of an impoverished, Muslim, Middle Eastern nation who wants to spend an exorbitant amount of money on a personal hobby. That’s a tough role to play, but Amr Waked not only plays it well, but makes the Sheikh an incredibly likeable, respectable character. Seriously, I would totally go fishing with this guy, and I don’t even really like fishing all that much. He has a few really lyrical, wise speeches about fishing and what it means to him. He does not view it as a hobby, but a spiritual endeavor that will improve Anglo-Yemenis relations, bring joy and prosperity to his people, and bring him closer to God. He makes some really convincing arguments. At the beginning of the movie, I thought that he was an irresponsible leader and a selfish human being, but about half way through his first scene, I changed my mind. The only problem is that he fails to convince some of his subjects. 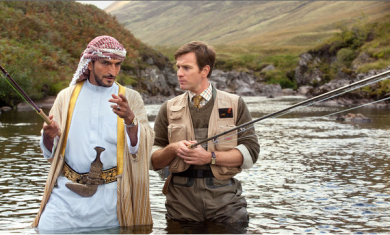 Lionsgate/Sony Pictures
“You see, Ewan McGregor, fishing is a lot like governing a third world country…”

Salmon Fishing in the Yemen is full of pleasant surprises like that, though, and they come subtly and quietly; they don’t wave their arms or punch you in the face like a red coat in a black-and-white Spielberg movie; they come along, make you a cup of tea, impart their viewpoints without trying to sway yours, and lend you their umbrella on a rainy day. So if you’re in the mood for a quiet movie about fishing starring Ewan McGregor and Emily Blunt, I recommend Salmon Fishing in the Yemen.