In this case, “shit” means that it’s good. Kids, amirite?

The Plot: When a mission goes wrong and James Bond (Daniel Craig) takes a rifle round to the chest—at M’s (Judi Dench) order, no less—the superspy is declared dead. For him, this means not shaving and drinking Heineken instead of martinis. A terrorist attack on MI6 brings him back to England, where M ignores the fact that he’s not fit for duty and sends him on the trail of Silva (Javier Bardem), a super crazy former MI6 agent. Silva is super obsessed with M, since she “betrayed” him years ago, in a decision that mirrors the one that left Bond as dead as he’s ever likely to be. Coincidence? I think not. Will Bond be able to protect M from this super crazy villain? Will Bond get to drive a sweet-ass car and make out with some hot ladies? Your guess is as good as anyone’s.

Sam Mendes made a really good Bond movie, you guys. Actually, it’s not just a good Bond movie. Goldeneye was a good Bond movie. It hit all the right notes and kind of almost had something to say a few times, but at the end of the day it was a pretty standard 90s action movie dressed up in a tuxedo.  Skyfall, like Casino Royale and the earliest Sean Connery films, is also a good movie. It doesn’t rely on franchise-specific clichés to get by. It’s got an engaging story, a good script, and, holy shit, real characters.

We’ve seen a lot of Bond in the last fifty years. Like Batman, he’s become a cultural icon to the point where we’re all pretty content to watch him go through the motions. He’s the ultimate secret agent. He’s a womanizing, probably-alcoholic badass. He’s one classy motherf*cker. MGM, that one’s a freebie. Who cares if he does the same shit in every movie? That’s why we watch them.

What would a Bond movie be without a ridiculous villain, ridiculous gadgets, and the governing idea that it’s tuxedo time ALL THE TIME? A Bond movie isn’t only a story about a British spy named James Bond, just like a Batman movie isn’t simply about a violent billionaire ninja in a cape. He’s our billionaire ninja, and Bond is our womanizing, probably-alcoholic superspy. That’s why I’ve met lifelong Bond fans who didn’t like Casino Royale because it “didn’t have any gadgets and the bad guy was too normal.” This is in reference to one of the only Bond movies that is also a legitimately good film.

MGM
If this is normal, I think I’ve been doing it wrong. Torture, I mean.

Does that sound a little stupid to you? Well, it is. But only a little. If every Bond film told an emotionally-involving story with realistic, well-drawn characters, then there only would have been like six of them and Bond would be dead now. If you’re building a fifty-year franchise, then you’re going to need a lot of junk food. That having been said, you also need to throw in some of the gourmet shit every now and then, otherwise people stop giving you money, and nobody wants to see Bond drive an affordable, fuel-efficient car. Well, not the target audience anyway.

Skyfall is the gourmet shit. After decades of retreading a path laid down by Goldfinger—the third film in the franchise—with varying degrees of success, the series has finally managed to re-invent itself. Casino Royale gave us a Bond that we could take seriously by turning its back on many of the clichés that defined the series, and Quantum of Solace made us question what the Hell was going on because the editing was so choppy. Skyfall honors fifty years of tradition, bringing back gadgets and Q (Ben Wishaw) and even the Aston Martin DB5, the car driven by Sean Connery in Goldfinger. When I saw this movie on Sunday, some of the audience actually cheered when the car was revealed. It was adorable, but also kind of awesome. Enthusiastic crowds are fun sometimes.

MGM
I hope it talks in the next movie. It can be his sarcastic American sidekick. Maybe voiced by Steve Buscemi?

What makes Skyfall really stand out—people are already saying that it could be the best Bond movie, though I disagree—is that it pays homage without becoming mired in cliché. It feels fresh, and much of that credit goes to director Sam Mendes (American Beauty, Road to Perdition) and writing team Neal Purvis (Casino Royale, Johnny English), Robert Wade (Casino Royale, Johnny English), and John Logan (Gladiator, Rango). Mendes directs this with the care and finesse that he applies to all of his films. He lets the story and lead performances take the forefront, but there’s nothing workmanlike about the direction. Again, it’s the gourmet shit.

Purvis, Wade, and Logan’s script treats the characters like real people. For the first time in a long time, M is developed beyond “cranky man/woman who puts up with Bond’s shenanigans.” Judi Dench gives a solid, emotionally-grounded performance. She’s as ill-tempered and acerbic as ever, but these traits mask an unwavering sense of duty and a deep, almost maternal affection for her top agent. Her relationship with Bond is tested at the beginning of the film, but they have a mutual respect and admiration that can’t be marred by his apparent death at her orders. 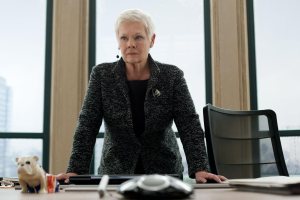 MGM
Depth or not, it’s always fun to hear her say “bloody hell.”

Seeing Bond return that affection adds a layer to his character that we don’t normally see. We’re used to watching him being suave at women and wryly defiant at bad guys and authority figures. It’s weird to see Bond sad. Weird, but also gratifying. Bond isn’t just a womanizing, probably-alcoholic superspy. He’s a human being, and we need to see him care about people if we’re going to believe that.

Silva tries, like so many villains before him, to convince Bond that they’re not so different, you and I. Hi-ho Silva (and away!) used to be the top MI6 Agent, and he was also “betrayed” by M. His first scene is great. Bardem chews just the right amount of scenery, introducing himself with an anecdote about rats and trying to throw Bond off his game by hitting on him.

Things get a little iffy after that, when the motivation for Silva’s attack on MI6 is revealed to be an obsession with M, and that obsession becomes Silva’s only character trait, unless you count bad hair and good planning. Sure, he’s crazy, but when craziness is the only thing that defines your character, then you end up with Flamboyant Spanish Joker. It doesn’t help that Silva does the whole “getting captured on purpose as part of an absurdly complex and well laid-out plan” thing. It must be super hard to be a villain in a post-Joker world (The Dark Knight flavor, of course). Dude may have dressed like a clown with bad hygiene, but he sure knew how to scheme.

Note for writers in a post-Joker world: The only reason that Heath Ledger Joker works, other than Ledger’s bitchin’ performance, is that the Joker doesn’t have a backstory. Silva does, but the connection feels hollow because the character is written as a menacing collection of mannerisms. Get it?

Skyfall wobbles a teensy bit in the middle, like Bond on his third Vesper, but it starts strong and has a perfect ending. Also, there are komodo dragons and one of them eats a guy. How great is that?

As far as I’m concerned, the film’s few golden-haired sins are forgiven.

The series has once again found its footing, and I for one am looking forward to probably another fifty years of this classy Brit hookin’ up with ladies, getting ever-so-slightly drunk, and shooting bad guys. For England.

17 thoughts on “Review: ‘Skyfall’ Is the Gourmet Shit”