After a long 3 weeks, Seven Psychopaths (2012) finally came to Canton, NY.  This is a movie that I’d been waiting to see for a few months now.  If you need some reasons to see it, consider these: Sam Rockwell, Christopher Walken, Colin Farell, and Woody Harrelson.  Regardless of whether or not I was going to review this movie, I knew I was going to see it.  I just really had to hope that there would be some sort of alcohol in it so I could make a relevant drink.  Lucky for me, it turns out that Colin Farell’s character Marty being an alcoholic is a major plot point.  Woohoo!

Plot: Marty (Farell) is possibly one of the most brilliant writers of our generation, but he also happens to be an alcoholic, which impedes his writing ability.  He gets hit by a wave of inspiration for his new screenplay, “Seven Psychopaths,” when a Jack-of-Diamonds serial killer is on the loose and his best friend Billy (Sam Rockwell) puts an ad in the paper calling for local psychopaths to come tell him their stories.  On the side, Billy and Hans (Christopher Walken) make a profit by kidnapping dogs then returning them to their owners for reward money.
Let’s start with my expectations.  The trailer lets on that this is going to be a movie with some crazy awesome actors who get into trouble by stealing the wrong Shih Tzu from another awesome actor.  There’s this cute gimmick where they label the seven psychopaths in the film, and you get the impression that the movie is going to be a clusterfuck.  Speaking of which, Burn After Reading is possibly my favorite movie of 2008 and has been my standard for clusterfucks.  In a way, the movies are rather similar.  A lot of awesome actors, communication errors, and unrestrained violence.

While looking for drinks inspired by this movie, or while looking for drinks used in the movie (you’d be surprised how frequently the bottle label is never turned toward the camera), I found a list of drinks that a particular theater was serving in honor of the movie.  With the price and usability of the liquors in mind, I ended up choosing ‘The Bonny,’ a drink whose ingredients even remind you of the fluffy Shih Tzu that drives the cast insane.  It also looked like a comforting cold-weather drink that would be fine to drink on a weeknight (unlike ‘The Psychopath’).  The ‘Jack of Diamonds’ looks delicious though, and would’ve been my first choice if I could afford cognac.
One of the strengths of this movie is its meta-plot.  You learn pretty early on that Marty is writing a screenplay called “Seven Psychopaths,” but it’s not clear how relevant that is to the title of the movie.  (In the sense that one of the characters whose wife is raped in A Clockwork Orange happens to be writing a novel called A Clockwork Orange.  Not a pivotal plot point, but it’s still there.)  The film starts labeling the seven psychopaths as did the trailer, but you soon realize that the psychopaths are different from the ones labeled in the trailers, some of them are from Marty’s screenplay, and some of them are from Marty’s life.  This bothered me.  The inconsistency was baffling.  What’s more impressive than making sense?  Making no sense whatsoever, then clearing up any and all loose ends with brilliance.  I’d really like to not spoil the movie for you all, but I’ll have you know I was very satisfied with how my confusions were alleviated.
The meta-plot shines in its subtlety.  This movie is rich in layers of multiple plots and story lines all tying together.  A lot of the humor in this film is found through its irony (in both the literal and misused senses of the word).  Realizing characters were doing one thing while saying another was a very rewarding experience as a viewer.  It’s almost as if director Martin McDonagh peppered in these Easter eggs for people who cared enough to find one of the few theaters showing this movie.  Note to self: Is it just a coincidence that Martin McDonagh wrote a screenplay about a character named Martin writing a screenplay?  Mind blown.  This really is an amazing movie. 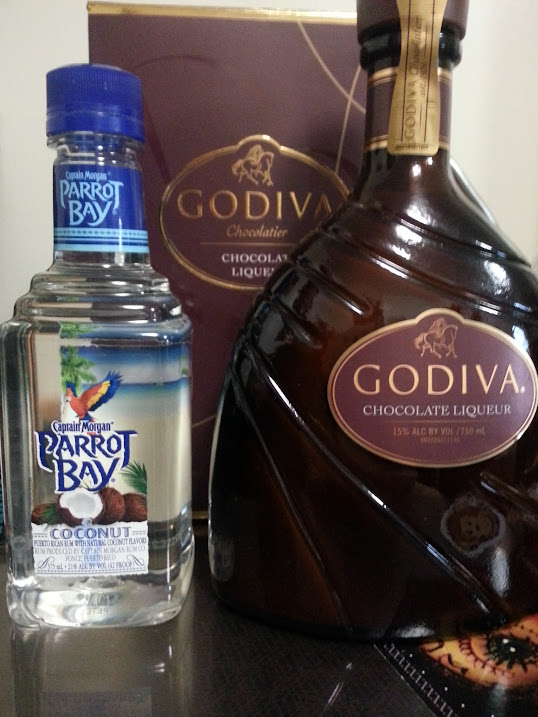 So brilliant, in fact, that I need a drink to calm my excitement.  I really only wanted to buy small bottles of alcohol, i.e., exactly enough to make a drink or two.  The liquor store here is so small, however, that rarer liqueurs they only sell in larger sizes.  So, here I have a small bottle of Parrot Bay Coconut Rum and Godiva Chocolate Liqueur.  Fancy!  On the plus side, chocolate liqueur goes with a lot.  Coffee, hot chocolate, milk, the list goes on…
Now, upon trying the alcohols separately for the first time, they were delicious.  Then I mixed the two together.  Still goddamned delicious.  Then to top it off with ginger ale.  The entire drink instantly curdled to the consistency of oatmeal.  This leads me to draw one of three conclusions:

I learned that last one the hard way when I would switch from a White Russian to a Rum & Coke without washing the glass entirely in between.  Soda makes things curdle.  Damn.  So, what I have now is the Almond Joy (or Mounds, I guess) of drinks.  It’s delightful and incredibly alcoholic.  Sorry to disgrace your namesake, Bonny.  I’ll have to try ‘Jack of Diamonds’ or ‘Don’t Give a Shih Tzu’ next.

For those who don’t love Sam Rockwell yet, he’s got a stunning performance in Moon (2009) and makes Iron Man 2 (2010) worth watching.  Even though this isn’t Billy’s story, nor his screenplay, it sure as hell is going to be his movie and he will stop at nothing to make sure “This movie ends my way.”  He takes his role seriously, but as his role is that of a psychopath (they tell you that in the trailer; it’s not a spoiler), his performance becomes that more eerie.  The absurdity of his character is controlled, but I guess that’s the sign of a true psychopath, right?  Someone who seems normal in everything they do, but then you’ll go ahead and read their diary to see “Note to self: do not burn the neighbor’s flag.”  He is charming, likable, and batshit insane all at the same time.  The other actors are absolutely fine as well, but Rockwell’s performance really stands out.
Is this movie for everyone?  No, not at all.  If you didn’t like Burn After Reading or don’t like having to look for the humor in a film, you might not enjoy this.  Seven Psychopaths is a film that deserves your undivided attention in order to see all the subtle gems that McDonagh threw in for us.  Movies like this only come out so often; I urge all those interested to not miss an opportunity to see it.