From special guest writer Will Standish.

Is there anything better than the Halloween special? No, there isn’t. Instead of the preachy plots and played out Christmas Carol adaptations of Christmas episodes, Halloween episodes allow cartoons to disregard all their inhibitions and tell the most terrifying, surreal, and often best stories to an eager audience.

This here be a countdown of children’s cartoons, so that excludes The Simpsons “Treehouse of Horror” anthologies (though if you ask your kind editor real nice, I’ll see what I can do) or whatever extended pop-culture reference Family Guy chooses to do to ring in the holiday. This also includes episodes that don’t necessarily take place on Halloween, but that deal with the supernatural.

So sit down, grab a bowl of Count Chocula and let’s go on a journey into….TERROR!

3. Angry Beavers– “The Day the World Got Really Screwed Up”

Angry Beavers was one of the rare shows that really pushed the envelope of the traditional children’s cartoon (can anyone think of another show that would do an entire episode in Spanish just for the hell of it?), and it’s this same goofy charm that makes the show’s Halloween special, “The Day the World Got Really Screwed Up,” so fantastic.

On Halloween, an alien rock-thingy lands in the backyard of famed B-movie actor, Oxnard Montalvo.

The alien presence wastes no time possessing Oxnard’s faithful manservant, Mann Servante, and bringing to life the wax statues of monsters from Oxnard’s movies. The beavers, passing the home while trick-or-treating, enter the house in hopes of getting an autograph from their idol, only to find that the alien is attracted to their life force and will stop at nothing to get it.

Within this structure, the episode lets loose an increasingly bizarre tale filled to the brim with references to old B-movies with all the appropriate character tropes: the square-jawed hero, the ever at-risk damsel, and the strange scientist. As the inhabitants in the house work to fight the alien, the creature fights back by removing all the color from the house. Not ones to be stepped on by stupid alien spoot-things, the humans and beavers decide to fight back—with movie science.

Confused? That’s okay, so is the episode’s narrator. The plot is purposely filled with holes and jumps in logic in the vein of wonderfully awful sci-fi movies of yesteryear. This episode is less concerned with the actual threat of its monster and instead revels in how it plays with its tropes and stock characters, drawing a distinct line between the confused beavers and the washed-up actors playing it straight. In a lot of ways, the episode is much more in line with some of the early Adult Swim offerings than the standard 90s Nickelodeon fare. It’s bizarre, funny, and everything you could want from a Halloween special.

Scooby Doo Mystery Inc. takes what we know and love about the Scooby Doo franchise and adds neat stuff to the mix like character development and engrossing overarching plotlines; think Twin Peaks for kids. And while a Scooby Doo cartoon can be expected to have a plethora of creepy moments, “Escape from Mystery Manor” from the show’s first season really knocks it out of the park, THE HAUNTED PARK.

The episode opens on a Halloween some 70 years ago with a family literally attacking each other for possession of a golden artifact. Naturally, as the family fights, the floor of their mansion begins to crumble and their home is swallowed into the earth trapping the family within, much to the wide-eyed terror of the youngest child. As one might expect, Mystery Inc. decides that to solve the mystery of their town and to find out why the original Mystery Inc. disappeared decades ago, they need to explore the mansion, which now resides under the local college.

As the gang explores the dilapidated ruins of the house, they fall into elaborate death traps, leaving all, except Fred, fearing for their lives (Fred really likes traps, guys). In the grand tradition of children’s shows referencing stuff that their intended audience should in no way be allowed to see, much of the episode is an homage to the Saw franchise, with an unknown tormentor taunting the trapped teens via radios placed throughout the house.

Lions Gate Films
This isn’t in the episode, but could you imagine?

Of course, the gang survives, as killing off the entire cast midway through a season is generally frowned upon, and come face to face with their captor. Instead of a disgruntled land developer in an elaborate costume, the antagonist is the surviving son of the family, who has become a tad paranoid and murder-trap happy in the past 70 years underground. While the villain isn’t a monster, per se, the threat is more real than in any other episode thus far. He is trying to kill Mystery Inc.

This episode is all about building an atmosphere and picking up momentum. For those new to the series, this episode can be seen as a turning point where the threats get more severe as the gang inches closer to solving their biggest mystery.

Someday I hope to meet the writers of this episode and give them a firm congratulatory handshake for writing an episode of Hey Arnold! so impossibly, incongruously terrifying. I’m not sure how the forces that be allowed this be aired on children’s television, but damn am I glad it was. This episode is from the last season and was the third to last episode to be aired, so maybe the producers decided to go full-tilt into nightmare fuel knowing that the series would be over before any serious complaints could be filed. But I digress, let’s examine this.

Perhaps what makes this episode so creepy in comparison with the series’ many fantastic ghost episodes is the ghost story that sets up the events of the episode. The story, as told by Gerald, of course, is about a young woman whose fiancé leaves at the altar on their wedding day, and, in the tradition of the crappy young men in ghost stories, marries her sister the very next day. The distraught woman is heartbroken and shattered, but soon recovers and learns to love again. Just kidding; she walks to her sister’s house and straight up murders them both in their sleep with an axe. The police find her sitting next to the corpses, tossing rice and humming the wedding march, before she jumps out the window to her own death. On the anniversary of her death, her ghost walks the graveyard, humming, and looking for people to kill.

The episode takes a pretty familiar plot structure for ghost episodes; Arnold and the gang won’t let Helga explore the graveyard with them, so she dresses up as the ghost bride to scare them only to find, surprise, a second ghost bride (spoiler: it’s Curly). Despite this familiar set-up, the show is able to craft something truly memorable and creepy. A lot of this lies in how the ghost bride is portrayed. Her humming as she strolls through the headstones is off-kilter and the way she moves is truly terrifying, as she seems to float through the graveyard with her dress slowly flowing in the breeze. The animators threw their effort into making the ghost as spine-tingling as possible.

In addition to the above, the episode also has terrible implications for the rest of the series. As mentioned before, the second ghost is revealed to be the gang’s classmate Curly. Arnold, usually known for his level-headedness-football-head joke-decides to punish him by leaving him tied up in a mausoleum. As he screams, a white mist pours in from the windows and we hear the wedding march being hummed. While this is rather creepy on its own, I feel it is worth mentioning that a look at the cast list on iMDB for the remaining episodes reveals that Curly is never seen again for the remainder of the series.

Let’s recap: terrifying story, a creepy ghost, and the implied killing of a 9-year-old. I rest my case. 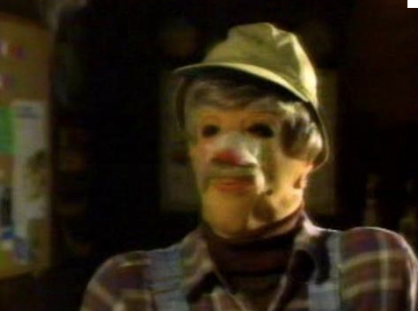 Look, I know this breaks the first rule of the article by not being an animated show, but dammit I need to share this pain. I can’t find the episode online anywhere, but I know I can take solace in the fact that nothing I will ever see in tv or movies will ever terrify me as much as Zeke the Plumber did when I was five. Damn you, Salute Your Shorts. A kid’s sitcom about a wacky summer camp had no right to be that terrifying.

4 thoughts on “A Bomb in the Lasagna: The Best Halloween Specials”