Welp, I definitely intended to review something before October twentieth, but here we are. 2020, etc. My theme last year, if there was one (a theme, not a year, 2019 definitely happened, I think), was Godzilla + The Simpsons. This year, you get witches. Why? Why does anyone do anything? I was in the mood for witches, which is (haha, get it?) also the answer to that rhetorical question.

While I don’t know if I’d classify them as monsters, cinematic depictions of witches are as varied as those of werewolves, zombies, or vampires. I had initially planned on doing a brief survey of witches in movies to provide context, but realized that it would take more time than I had allotted myself to write this already late review. Imagine my joy when I remembered that Second Breakfast had written that very article four years ago. I highly recommend reading it, as well as /horror’s review of The Witch, which deals eloquently with the witch as tied to Puritan beliefs.

The Plot: Nan Barlow (Venetia Stevenson), a young college student, is advised by her professor Alan Driscoll (Christopher Lee) to visit a small Massachusetts town to do research for her term paper on Colonial witchcraft. Specifically, she’s there to study the burning of accused witch Elizabeth Selwyn (Patricia Jessel). What Nan finds is a chilling revelation that her subject might not be entirely in the realm of fantasy. After she fails to arrive at a family gathering two weeks later, her older brother (Dennis Lotis) and boyfriend (Tom Naylor) team up with the local Reverend’s (Norman MacOwan) daughter (Betta St. John) to investigate.

The City of the Dead is an effective low-budget horror movie that succeeds because of solid direction, dedicated performances, and a decent script. The creepy set design and abundance of fog–there is really an impressive amount–certainly don’t hurt either. The soundtrack is often appropriately eerie, and the jazzy interludes during driving scenes actually work to make the world feel larger, rather than act as a break in the mood.

The film opens with a prelude set in 1692. After a brief “trial” that’s more just a few questions thrown at a mob that’s clearly not interested in standing up for anyone accused of witchcraft, we see the fiery execution of Elizabeth Selwyn. Being a witch, she curses the town of Whitewood while laughing maniacally, because at that point, why not?

Who among us, etc?

Given that it opens during the same year as the Salem Witch Trials, it’s unsurprising that The City of the Dead draws from the Puritan view of witches as Devil-worshippers, practicing rituals that are a perverse inverse of the Christian church. Midnight Sabbaths sacrificing young women at the altar to preserve not the soul, but the physical form*. Eternal youth at the cost of Eternal Salvation. It doesn’t delve too deeply into the rules of witchcraft, or need to, but that view of witches provides an interesting contrast to the more enlightened and rational thinking of the serious academics who serve as our protagonists. Nan, our heroine for the first half of the movie, is naïve but curious. She’s fascinated by witch hunts and excited to travel to Whitewood and do some in-depth research for her term paper**.

Venetia Stevenson, in one of her final roles before an early retirement, isn’t asked to do much besides seem pleasant and inquisitive–and briefly walk around in lingerie for no apparent reason–before SPOILERS being murdered halfway through the movie.

I will admit, I was not expecting The City of the Dead to pull a Psycho and kill off the apparent protagonist. After spending the first part of the movie getting to know the town and becoming increasingly creeped out, Nan finds that she’s been marked for the ritual she’s been reading about and foolishly heads into the inn’s cellar to investigate. It goes about as well as you’d expect.

DO NOT DO THIS

Despite Christopher Lee being top-billed, he’s really a secondary antagonist, sending unsuspecting students to their doom. The true villain is Selwyn, and Jessel’s performance is pitch perfect. Even before the reveal that the sinister innkeeper Mrs. Newless is actually a 300 year old witch, she plays the character with an underlying archness that hints at what’s to come. She’s as formidable when berating the mute maidservant Lottie (Ann Beach) as she is when brandishing a dagger above a sacrificial altar.

Jessel’s performance is heightened but played straight, which is true of the other actors as well. Betta St. John’s Patricia and Dennis Lotis’ Richard Barlow become the de facto protagonists in the second half of the movie, as Patricia helps guide Richard’s investigation into his sister’s disappearance. They’re joined by Tom Naylor as Nan’s college boyfriend, who is sidelined by a car accident but plays his part in the finale. St. John’s character is less naïve and more competent than Stevenson’s, although she does get to do her fair share of screaming in the climax, as horror heroines are wont to do.

As the “level-headed manly professor,” Richard is initially skeptical not just of the supernatural, but of its validity as an area of historical study. Lotis gives a steady performance, gradually switching from slightly patronizing big-brotherly affection to stalwart man of action.

Without spoiling any more than I have, the climax is well done, and makes great use of a fog-shrouded midnight graveyard. I feel like that alone should warrant a watch. 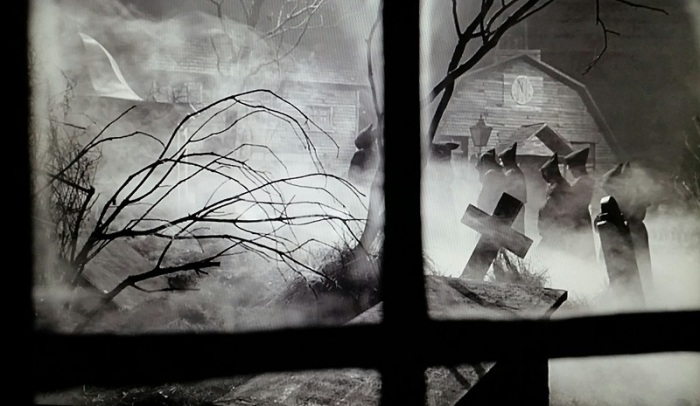 The City of the Dead is atmospheric and well-paced. The performances are played straight, and pitched at just the right tone to create a heightened sense of menace without veering into camp. If you’re in the mood for something spooky but not too intense or gory, I’d recommend checking this out. I watched it for free on Amazon Prime, as part one of Double Doses of Horror: Witches and Crazies! This film clocks in at a brisk 76 minutes, which is honestly a good length for a horror movie.

Tune in, I would say next week, but who knows? Tune in whenever I publish another one of these. Before that, tune in for the next /horror, which I think is probably Friday. You know what, just refresh the site every now and then. We’ll be around.

*Though I haven’t come across any accusations of ritual human sacrifice in any accounts of the Salem Trials.

**I know this shouldn’t bother me, but a term paper? Not, like, a Senior thesis, or maybe a dissertation? This is the only part of the movie for which I couldn’t suspend my disbelief. I am expected to buy that this college student is going to spend two weeks of her vacation working on a term paper for a one-semester course? Like, is this her major? Does she intend to go to grad school with a focus in New England witch hunts? Because okay, sure, maybe, but even then, it still feels like a big commitment to make for an undergrad course. I realize that this rant is utterly ridiculous, which is why it’s been relegated to a footnote.

2 thoughts on “Octoberween: “The City of the Dead””