When I was a wee sprog, more than any other kind of movie, I loved classic Universal Studios monster movies. Frankenstein, Bride Of, Creature from the Black Lagoon, The Wolf Man, The Mummy, The Invisible Man, Dracula, Phantom of the Opera, these guys were my buds. Despite the fact that they all enjoyed many sequels, cross-overs, team-ups, and face-offs, I really quickly burned through these child-appropriate horror movies.

So, I recall, one birthday I unwrapped a distinctly cassette-shaped present to reveal a film of which I’d never heard before, a movie outside the Universal canon: The Day of the Triffids. The 1963 sci-fi monster movie is campy, cheap, and essentially appropriate for childhood viewing, so an understandable selection for this particular viewer. Boy howdy did it ever freak me out, though.

The Plot: When a meteor shower of unprecedented brilliance passes Earth, the bright flashes of light it causes render blind everyone who looked at it, which as it turns out, was pretty much everyone. A small handful of people retain their sight, and must navigate a rapidly dissembling civilization as a new species of carnivorous plant, the triffid, makes its move to become the new dominant force on the planet.

I watched The Day of the Triffids at a fairly young age and it scared me so thoroughly that I abstained from rewatching it until just recently. It was fun to revisit as an adult with a more refined and objective critical eye, trying to understand what it was exactly that so unnerved young Chris when other films of this ilk conjured only joy.

After only a few minutes, the answer suddenly dawned on me! It struck me on the head much like a triffid’s deadly sting. The reason it scared me so much? Turns out it’s an extremely disturbing movie. 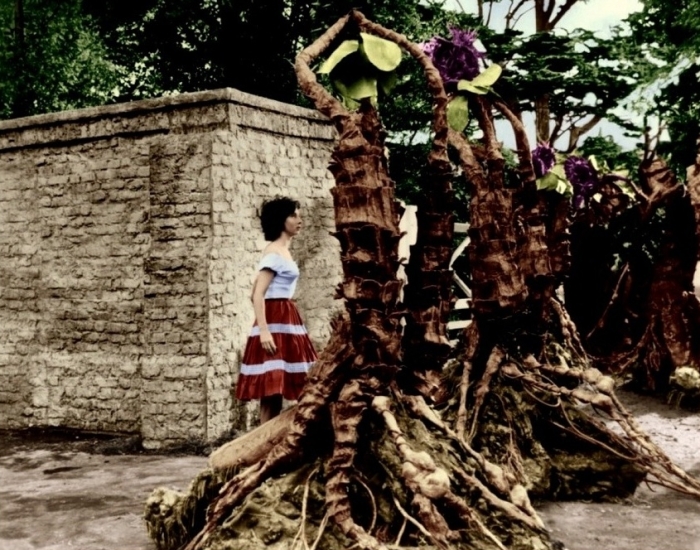 Allied Artists | She’s blind, a likable character, and those are triffids, and this doesn’t end well.

Yeah, I know I’m a grown-ass man and I just reviewed a modern slasher movie, but that garbage couldn’t hold a candle to Triffids. Unlike in my beloved Vincent Price chillers, the camp value in Triffids isn’t endearing; it’s uncanny and thoughtfully disquieting.

A few years ago, thinking I might write an article about this movie for this website, I decided to read the book. Crazy idea, right? The original novel is primetime mid-century sci-fi. It taps into social fears of outer space, radiation, communism, greed, an abandonment of traditional values, all those things that were staring post-war Britain in the face. The book Day of the Triffids is hardcore social commentary with some horror elements. That is not the case with the movie.

The film adaptation doubles down on the terror, the action, the violence; it’s quite a bit nastier than the book and–to this viewer, who is essentially flip-flopping on what he wrote last week–all the more effective for it. As in the book, though, the triffids themselves are merely there as an extra menace. The real horror emerges from the complete and total disintegration of society. Of course, in that context the triffids are a sublimely placed movie monster. With triffids as naturally occurring plant-life merely exploiting the increased commonality of a food-source, the writers of book and film are able to point out to us how delicate and precarious our position is at the top of the food chain. Remove one of our senses, one of our superiorities, and another species will make a move to supplant us. 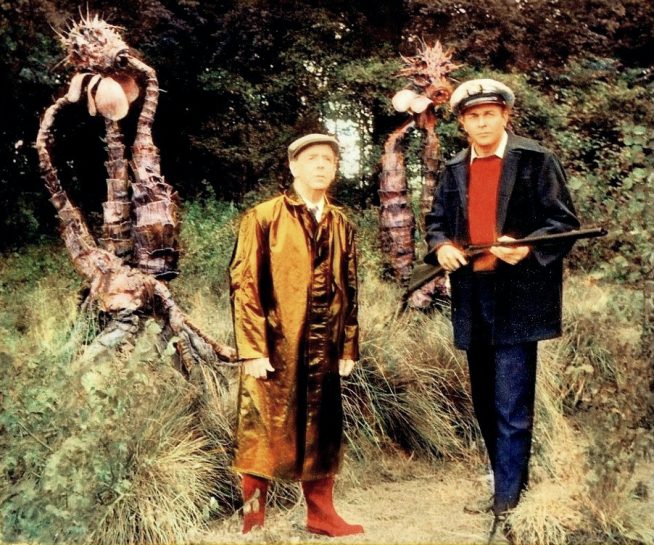 Allied Artists | Heh heh, supplant us, get it?

I’m not sure if these themes necessarily dawned on me at a young age, although this was certainly the first apocalypse movie I viewed and I probably found its ideas deeply troubling. No, even without diving into a critical analysis of Triffids, this movie is unsettling at face value and it’s because it makes you watch blind people suffer. The natural human impulse, the optimist in me says, is to help those less fortunate. Our heroes, retaining their sight, do help the blind they encounter, but the film constantly puts them in situations where they can’t help.

In one of the most upsetting set-pieces, our handsome hero and his recently rescued orphan sidekick have reached the coast and plan to find a boat to mainland Europe. While scouring the dockyard they find a radio, which is picking up mayday signals from an airplane. The pilot, copilot, crew, and all of the passengers were blinded during the night. Our protagonists–and we–listen helplessly as the pilot reassures his passengers and attempts to land his plane. Maybe I’m reading into it too much, but his stiff-upper-lip, quintessentially English approach to an abjectly doomed situation seems to be more on-the-nose social commentary.

For all this film and its book say about the world at large, I think for the purposes of this article, it would be prudent to zero in on its impact on me. As I’ve said over and over again, this movie seriously bothered me as a kid, and although I’m sure I wouldn’t have said it at the time, now a couple decades down the road I can look back and say I’m glad it did.

Allied Artists | And since I’d be remiss not to include this: *ahem* “And I really got hot when I saw Janette Scott fight a triffid that spits poison and kills!”

And that’s how I’m capping off the month. Halloween is about having fun, reveling in the spooky, celebrating monstrosity, dressing up, eating candy, and acting crazy. It’s also about horror, though. The best horror movies, like those Universal monster flicks I adore so much, are entertaining and fun to watch, but they also say something. Not to pat myself on the back too much, but even at a young age, I got some of what those movies said. I understood the innate tragedy of the monster’s persecution in Frankenstein, how the Wolf Man couldn’t be held responsible for his actions. I also understood, watching The Day of the Triffids, that social safety nets are fragile. Fear is important. It can tear us apart, but it can also inspire us to move forward, to learn.

OK, granted, at that young age, I also just found the plants themselves viscerally scary, too, but I don’t think that undermines my point at all.

The Day of the Triffids is a terrifying movie and a great one, too. I have no regrets about the place it holds in my cinematic life.