Several years ago, back when I was in the habit of writing Second Breakfast every week without fail, I wrote a few words (~6,000) on one esteemed Mr. Scoobert Doobert Doo. In fact, for my last Octoberween celebration with Rooster Illusion, I dedicated five weeks to write what I somewhat confidently deemed a “Comprehensive History of Scooby-Doo”.

Well, here we are three years later and my history is no longer comprehensive because, shocker!, people have continued to make television shows and movies starring this talking dog and his four human friends, Shaggy, Velma, Daphne, and Fred.

I left off in 2016 having made it all the way up to Be Cool, Scooby-Doo. Now there’s Scooby-Doo and Guess Who?, which kind of reiterates the New Scooby-Doo Movies, teaming up the Mystery Inc. gang with a new celebrity (real or fictional) each time. These seem to mostly range from fine to yeah, fine. These are fine.

While TV hasn’t seen too much of Scoob and the Gang since 2016, they have starred in six full-length direct-to-video movies, of which an alarming half are of consequence. Half. Three consequential Scooby-Doo movies in just three wild years. What a time to be alive. 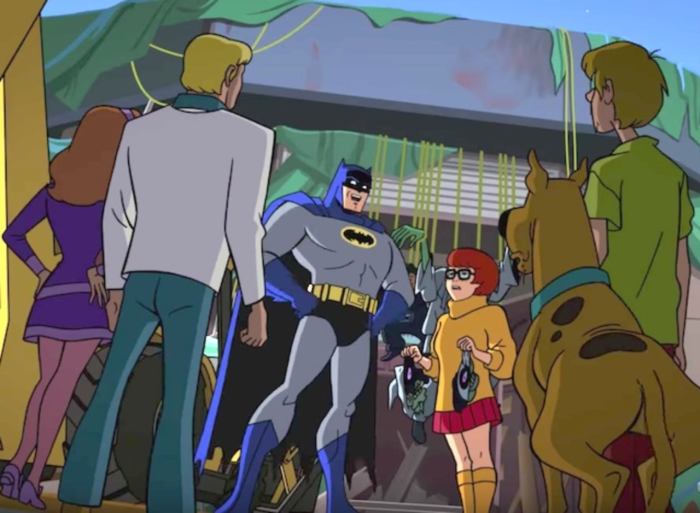 The first of these three, Scooby-Doo! & Batman: The Brave and the Bold is definitely the most oddly named of the trifecta, just considering punctuation, but maybe the best? Maybe. I don’t have too much to say about this one, except that it does allow Mystery Inc. to team up with the World’s Greatest Detective yet again, along with a host of other DC superheroes and villains, especially those who frequented the Brave and the Bold cartoon series from a few years ago. What’s curious about this movie is that it actually came out seven years after The Brave and the Bold ended, but I’m glad they went with that iteration. The Batman of that show is fun and makes jokes from time to time and hangs out with Aquaman and Plastic-Man. And a talking dog.

Next, we’ve got Scooby-Doo! and the Curse of the 13th Ghost. This movie is an extremely good time, hearkening back to The 13 Ghosts of Scooby-Doo, a 1980s miniseries which pitted Scooby, Shaggy, Daphne and two simpering sidekicks against thirteen of the most evil, most vile, most deranged ghosts in history. Well, okay, the ghosts themselves aren’t all that bad. The important thing about 13 Ghosts is that it featured Vincent Price as a mystical demon-fighting magician named Vincent Van Ghoul. The other important thing is that the writers couldn’t count, and Scooby and his friends only dealt with twelve of the thirteen ghosts.

Well, Scooby, Shaggy, and Daphne are back at it again, replacing Scrappy with Fred and Velma and Vincent Price with a perfectly fine Vincent Price impression. They’re going to solve the mystery of the thirteenth and most dangerous ghost once and for all. The movie is a delightful throwback to one of the only highlights of the Scrappy years, and it ties up a loose end in a great way. 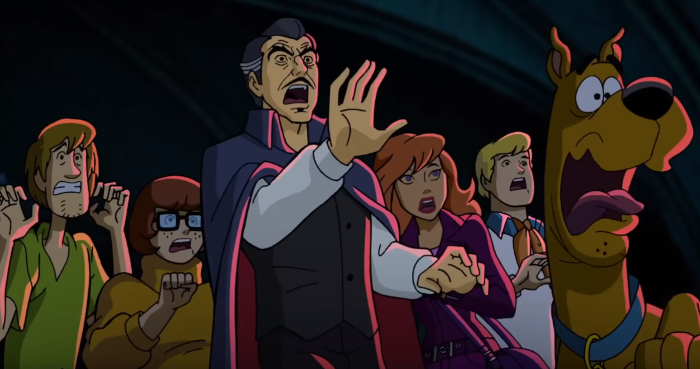 Of course, none of these movies would ever have existed without Scooby-Doo on Zombie Island (1998). That was the first ever direct-to-video Scooby adventure and it was so popular it single-handedly revived the franchise after years of stagnation.

Scooby-Doo just turned fifty, and to commemorate this milestone, the good people over at Hanna-Barbera decided to revisit this creepy caper with a long overdue sequel, Scooby-Doo! Return to Zombie Island.

In Return, the gang wins a mysterious prize for a weekend getaway at an island paradise. As the mysterious happenings begin to pile up, they finally realize that they’ve been duped into revisiting the zombie- and voodoo cat people-infested island of before. That mystery has haunted Velma all these years, as that time there were no rubber masks in play; all the monsters were real. 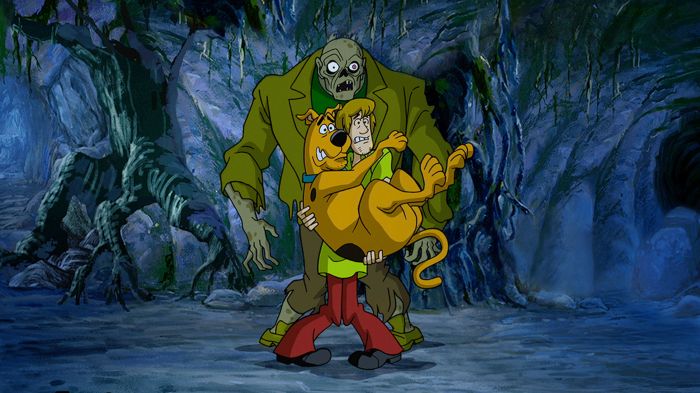 This time, however, they’re not. About half way through (spoiler alert), Mystery Inc. realize they’re on a movie set, and that someone is attempting to make a found-footage style horror movie based on their past experiences. When they confront the director and ask him to explain himself, he says, “The only things studios care about these days are franchises.”

Well… Scooby-Doo just turned 50, or 350 in dog years, and in that time has starred in well over a hundred television series, movies, video games, comics, and who knows what else? That mystery-solving talking dog has become one of the most recognizable and beloved animated characters in history. With that in mind, here’s something I never thought I’d say about a cartoon dog: he deserves better. 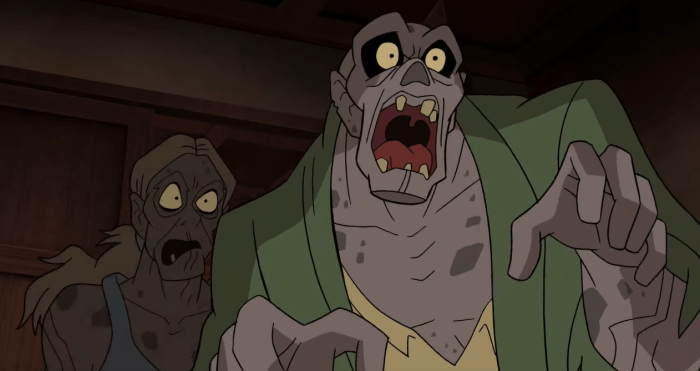 If the purpose of Return to Zombie Island is, indeed, to celebrate this momentous anniversary and pay homage to the movie that resurrected an all but dead franchise, then it has failed at just about every turn, and the writers seem to know that. I mean, let’s break this down here. Four famous mystery-solving kids and their talking dog (who have all recently given up solving mysteries) are tricked into starring in a bad movie that rehashes one of their most glorious outings and is directed by someone who would rather not stoop to that level and has lost his faith in the industry. Sounds like someone caved into corporate to get this sequel made.

Right at the beginning of the movie, Shaggy and Scooby are watching Elvira, a TV show in which a vampiric hostess lounges around, cracks some solid bat puns, and introduces a slew of B horror movies. One of the earliest lines of dialogue features Elvira apologizing to her audience for the mediocrity of the movie they’re about to watch. That’s a little on-the-nose. She even returns at the end to say, “Really, that’s what we’re going with here? That’s the best we’ve got?” 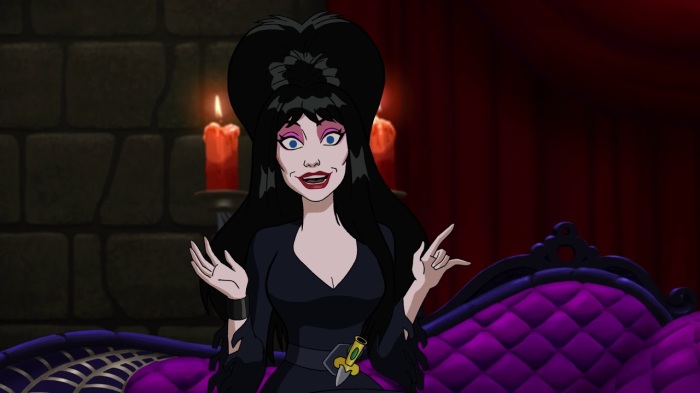 I guess it is, TV’s Elvira. There’s an additional subplot in Return that focuses on Fred’s internal struggle having recently sold his beloved Mystery Machine. Without that garish van, he just doesn’t know who he is anymore.

So… screenwriter Jeremy Adams has some feelings about the present state of Scooby-Doo. Now, the previous two movies I mentioned all rehashed past high-points for the character. The Brave and the Bold obviously follows in the footsteps of the classic 1970s Scooby-Doo Meets Batman movies and 13th Ghost is a direct followup to the glorious miniseries of the ‘80s, after which (depending on how you feel about A Pup Named Scooby-Doo, if indeed you feel anything about it) the franchise pretty much stagnated until Zombie Island.

And I get it. Since the conclusion of the extremely good Scooby-Doo: Mystery Incorporated series of 2010-13, no one has known exactly what to do with the character. Mystery Incorporated took a belabored but comfortably familiar formula and turned it entirely on its head, daring to challenge children to follow a multi-season overarching plot, to deal with some actually spooky elements, and even *gasp* witness some real character development. Mystery Incorporated dared to do something new and it paid off. Since then? Not a whole lot to write home about, and the people who made Return to Zombie Island clearly feel very strongly about that.

But here’s the thing: when your product stagnates and the quality of new iterations pales in comparison to that of some of their predecessors, you don’t get bitter and angry and complain about it. Find your head in your hands after The World Is Not Enough? Good. Fine. Make Casino Royale. Don’t know where to go from here with Scooby-Doo? Make another Zombie Island. I don’t mean that literally, of course. Don’t send the characters back to the island; we all saw how that turned out (okay, maybe none of you did, dear readers, but I watched the whole thing). I mean sit down with pen and paper in hand and think of something new to do. 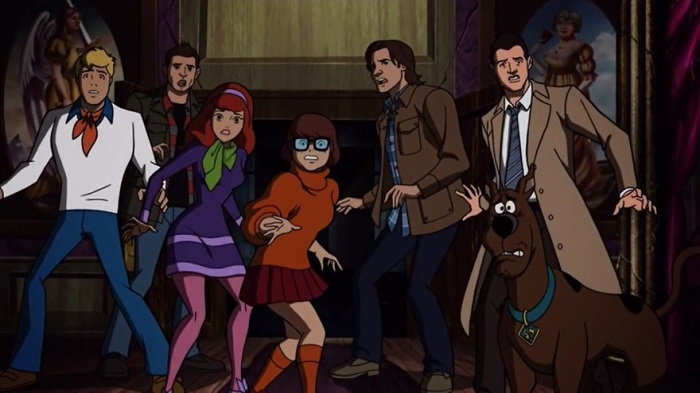 Warner Bros. Oh yeah! I forgot to mention this. Speaking of stagnant franchises, there was an extremely good Scooby-Doo/Supernatural crossover episode. Check it out.

Next spring, Scooby is heading back to the big screen with a full-length animated feature called Scoob, which includes the voice talents of Will Forte, Gina Rodriguez, Zach Efron, Amanda Seyfried, and, of course, Frank Welker (the only original Scooby-Doo cast member left). IMDb also lists Jason Isaacs as Dick Dastardly (from Whacky Racers), Mark Wahlberg as Blue Falcon, Ken Jeong as Dynomutt, and Tracy Morgan as Captain Caveman. Other beloved Hanna-Barbera characters are rounding out that cast. Who knows? Maybe doing something new will pay off?

Need something for Octoberween? Check out Curse of the 13th Ghost or The Brave and the Bold. Don’t waste time on Return to Zombie Island. Wait until they think of something better to do.