From the moment when a desperate band of survivors beat down on zombie hordes in an English pub in time to Queen’s “Don’t Stop Me Now” in his 2004 directorial debut Shaun of the Dead, it was clear that director Edgar Wright had a rare knack for combining clever cinematography with needle drop pop songs. That same knack, fostered throughout his filmography through movies like Scott Pilgrim Vs the World, blossoms in particularly spectacular form in Baby Driver. A car chase movie, Baby Driver runs along the rhythms laid down by such varied artists as Dave Brubeck,  The Damned, and The Commodores. In turns breezy, funny, and white-knuckle tense, Baby Driver is a summer movie standout.

The plot: Getaway driver Baby (Ansel Elgort) is in debt to a scary and powerful man (Kevin Spacey). An exceptionally gifted driver, a “Mozart in a Go-Kart”, Baby times his daring escapes to the tunes on his iPod he uses to drown out the tinnitus he suffers from a childhood accident. With his debt nearing completion and a romance blossoming with diner waitress named Debora (Lily James), Baby is looking to get out of a life of crime and out of the city for good. But a driver that good isn’t going to be let go that easily, and a final heist with an unpredictable crew (Jamie Foxx, Jon Hamm, and Eliza Gonzalez) stand between Baby and escape.

From its first moments, Baby Driver stands visually and sonically apart. The film’s breathless opening heist is not just scored to Jon Spencer Blues Explosion’s “Bellbottoms”, it is shaped by it. The cinematography dances in time with the music pouring from Baby’s headphones, the outside world being  and controlled by Baby’s musical experience of it. Through Baby’s headphones, the world dances along with him to a coffee shop to classic R&B, guns blasts in time to crunching guitar riffs, and an absence of music marks imminent danger. Baby Driver is visually distinct even within Wright’s already immaculately shot body of work. Baby Driver feels like the culmination of ideas the director has toyed with for his entire career given free reign to be pushed to the very limits. No shot feels wasted, and the film’s quiet moments, such as Baby dancing around his apartment and speaking to his adoptive father (CJ Jones, a deaf comedian and performer in his first major movie appearance) through ASL, are invested with the same style and attention as action scenes.

The characters of Baby Driver are archetypes in a largely archetypal film. There have been plenty of stories of criminal wheelmen trying to make a clean break, and Wright pays tribute to many of them. But, like the titular driver of the movie, Wright surprises onlookers by taking the  turns no one sees coming. The criminals of the film operate under code name, and aside from what they can guess about one another, very little is revealed. It’s never disclosed exactly who Kevin Spacey’s Doc is or what he does, but if the viewer thinks to ask, it hardly matters. Wright (who also scripted the film) reveals just enough about the cadre of criminals in Spacey’s employ for the viewer to like them, be scared of them, and to be genuinely surprised when their reactions are not what’s expected. Ansel Elgort plays a man leaning into archetype, impassive behind Ray Ban sunglasses and iPod earbuds, the music in his ears not just a counter measure to his tinnitus, but also an escape from a painful past and harrowing present circumstances. At his core, Baby isn’t too different from a lot of young 20-somethings,  taking personality cues from movies and solace in music to mask fears and pain. Much like Shaun of the Dead and Scott Pilgrim Vs the World, Baby Driver is ultimately a tale of an everyman* in incredible circumstances.

Baby Driver is a love story, of a boy and girl, but also of the music that brings them together. The romance between Debora and Baby is a romance between two pop culture archetypes, daring each other to open up as real people. That opening is facilitated by pop songs, the discussion of them and playing them for one another. There’s a degree of reality in their courtship not found elsewhere in the film, a corner of the universe that doesn’t need the world to be choreographed to music because Baby doesn’t need it to be. Unfortunately, Debora doesn’t benefit from the screentime Baby has to pull herself fully out of archetype. The romance remains the most affecting of Wright’s career, even if we mainly get to see Debora from Baby’s perspective. 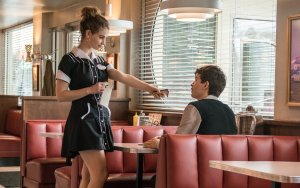 A few too many false endings aside, one of the wonders of Baby Driver is how restrained it feels even with its wall-to-wall music and stylized editing. A movie of remixed Americana packed to the rafters with pop tunes shouldn’t be as light on its feets as Baby Driver and not nearly as heartfelt. Baby Driver is the summer movie antidote for the viewer stifled by a slate of sequels and remakes. Gripping, original, and effortlessly cool, it’s a movie best experienced on a hot summer day in a packed theater with a soundtrack ready to be blasted from car speakers the rest of the year.

*a white, straight everyman, so the “every” is a pretty subjective thing here as always

One thought on “A Bomb in the Lasagna: Music is Escape and Driving Force in “Baby Driver””