The Book of Life is a computer animated film that centers around the Mexican holiday of the Day of the Dead. It tells the story told a million times of two men trying to win the heart of the same woman, but adds a bit of a spin on it when two gods bet on the outcome of the love triangle. The gods in question are La Muerte (Kate del Castillo), who rules the Land of the Remembered, and Xibalba (Ron Perlman), who rules the Land of the Forgotten. Both worlds are where people go when they die. The Land of the Remembered is for those who are remembered by the living, and are still able to visit their loved ones as invisible spirits on the Day of the Dead. The Land of the Forgotten, of course, is where spirits go when no one remembers them and so will eventually disappear. Xibalba is frustrated with having to rule over such a desolate land and thus challenges La Muerte to a bet. The bet involves a trio of children: the kind-hearted Manolo (Diego Luna), the ambitious Joaquin (Channing Tatum), and the courageous girl they both vie for, Maria (Zoe Saldana). The story follows the children as they grow up in the town of San Angel, and focuses on the rivalry between Manolo and Joaquin.

20th Century Fox
From left to right: Manolo, Maria, and Joaquin. I just noticed that most promotional material for this movie puts Maria in the center. Bravo!

Though this is a tale that we’ve all heard before, I am certainly not unhappy with this movie’s rendition of it. For one, Manolo and Joaquin’s rivalry is neither petty, nor mean-spirited, as is commonly portrayed in similar plots. The two remain good friends and enjoy their competition. They fight side by side as often as against each other. They also face similar family issues. Joaquin is the son of San Angel’s hero and Manolo is the son of a famous bullfighting family. Both often feel pressured to follow in their family’s footsteps. Manolo especially feels out of place as he does not care for the violence of bullfighting and would rather become a musician. At one point, Joaquin says of their troubles to Manolo, “Those are some big shadows we live under”. Even Maria lives under a “big shadow” as the town leader’s daughter. Much of her responsibility comes from not only having to protect the town from bandits, but also being forced into a confining feminine role. This movie does somewhat smack you in the face with feminism, which isn’t a bad thing, but they could have been a bit more subtle about it. However, it is refreshing that they downplay the damsel-in-distress role that women in similar story concepts tend to be placed in. She even takes a rather active part in the final fight scene in both rallying the town together and fending off bandits through swordplay and hand-to-hand combat. This makes the three characters feel more like a trio working together, rather than simply two guys and that one girl they like.

20th Century Fox
One for all, and all for o—oh wait, that’s a different story…

The interactions between La Muerte and Xibalba are enjoyable as well. As eternal gods, you really feel like these two have a history – and a romantic one at that. Like our main heroes, these two also have a rivalry, but intertwined in this competition is some romantic tension. Their tendency to both argue and flirt at the same time is humorous and well written. Not only that, but I love how these two look. Their costumes and even their movements are detailed, and they are fun to follow as they move across the screen. La Muerte’s make-up is wonderfully detailed, and Xibalba’s skulls-for-irises are an inventive design choice. I thoroughly enjoy their presence when these two immortals are onscreen.

The music in the movie is perhaps the worst part of the film. Most of the songs are Mexican-style rehashes of modern love songs such as “Creep”, “I Will Wait”, and “Da Ya Think I’m Sexy”. They felt so out of place with the themes and setting of the story that it was extremely distracting. I wish the film had more original music, and didn’t feel the incessant need to be “modern” and “cool” in so awkward a manner. The movie even already had some descent original songs. I loved the scene where Manolo sings to the spirits of the bulls that all his ancestors fought. The song is aptly named “The Apology Song”, and has him humbly apologizing for the centuries of bloodshed between the bulls and his family. It is a rather powerful and solemn lament. Not only that, but it wraps up the development for his character quite nicely. Why couldn’t there be more songs like that?!

Another distracting part of the movie is the frame story. This tale of the trio and the gods and the town of San Angel is wrapped inside a poorly pieced together frame story of a mysterious tour guide (Christina Applegate) telling the tale to a group of degenerate school children. I really hated whenever the story shifted back to these kids. They always did it at major emotional moments, showing how the kids reacted to the romantic or tragic events. It felt like it was a shortcut by the writers trying to tell the audience how to feel, thereby ripping me from a well set up scene to an annoying entourage of whiny kids. Though I absolutely abhor this device, I begrudgingly admit to its importance in the plot. First it sets up the idea of “The Book of Life” in that it is a book in which all stories are written down. Secondly, it ties in the gods’ story to the love triangle and essentially gives our main trio immortality. The outcome of whether Manolo or Joaquin win Maria’s heart, affects the fate of the gods and who rules over the Land of the Remembered and the Land of the Forgotten. Therefore, it would make sense that the gods wanted their story to be remembered. In telling the story to others, the gods are thus granting our heroes and the residents of San Angel an eternal (after)life in the Land of the Remembered.

20th Century Fox
The Land of the Remembered

And what a beautiful world the Land of the Remembered is! It is a colorful and vibrant place, and it is here where the animation really shines. With a wide ranging palette, exciting lights, and immense detail in everything, you can really understand why Xibalba would want to rule such a land, and not the grey and depressing Land of the Forgotten. This brings me to another thing I really like about the movie – how it handles death. Very few children’s movies handle death well, and if they do handle it at all, they do so in predictable ways. There’s the tactic of ignoring it, using euphemisms or by not directly addressing it. There’s the popular Disney style of “death” where at first we think our heroes are dead, but then it turns out they are alive, so the audience never has to reflect on the subject. There’s even the style of going over the top with it in a Tim Burton-esque way of making people come back from the dead in an odd, quirky manner. None of these tactics forces the audience to actually think about what death means and doesn’t give children the opportunity to ponder the idea of death. This is unfortunate, because in some ways, I think it is an important discussion that children need to hear about. The Book of Life somewhat presents the opportunity for such a discussion. It does go a bit into the Tim Burton afterlife-world, or Disney-death tropes, but it doesn’t shy away from actually talking about the subject. It approaches death both from the perspective of the still-living and the deceased. It explains that death can be a sad thing, bringing up the pain of separation from loved ones, or the idea of leaving the world with regrets. When Manolo’s mother sees Manolo in the Land of the Remembered she states “I’ve waited so long for you… but not long enough!”, combining her happiness for reuniting with her son, and the sadness in the realization that he is dead. At the same time, it shows that death is sometimes a lot harder for those still alive than for those who have passed away. After all, the way the Land of the Remembered is represented is as an eternal festival! Instead, the movie explains that the true despair is in being forgotten. The tale of our trio even starts out with them celebrating the Day of the Dead with their families, and mourning their lost loved ones. The audience sees their ancestor’s spirits accompanying our main characters. The living cannot see or sense the spirits in anyway, but by remembering them, they can feel their love. This scene notes the importance of remembering those who have died and celebrating their life. In this way, the film takes death seriously and explains it so that a child can understand, while at the same time not talking down to its audience. 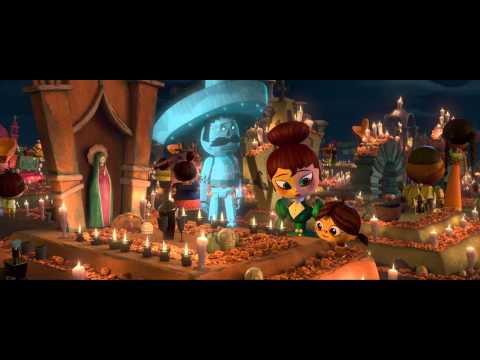 20th Century Fox
A spirit visiting his family on the Day of the Dead.

The story told in The Book of Life may be one we’ve all heard before, but the interactions and relationships between the characters is rather unique, the art style is flashy and original, and the fact that it is based around a holiday and themes that don’t get much attention in media, makes this a film I’d readily recommend.