Well, Halloween’s come and gone, which means it is, yet again, Oscar season. If we’re counting The Martian, then this year’s Oscar season is already off to a much better start than last year’s notably terrible one. I can’t say I have particularly high hopes for most of the likely contenders yet to hit theaters, but… you know, it happens every year, so I know what to expect. They’ll probably be fine, right?

I’ve notice a lot of people criticizing this movie for its historical inaccuracy, which seems odd to me for a few reasons. Chief among them is the fact that no one ever cares about historical inaccuracy when it actually matters, or even when it doesn’t. It certainly never seems to impede people’s enjoyment of Oscar movies. I mean, consider Gladiator. Or, I dunno, remember that time when the Best Picture race was entirely between Shakespeare in Love and Saving Private Ryan. Why suddenly turn on Suffragette? But that’s just me ranting and not really the heart of the matter. They’re complaining about historical inaccuracy, but I think what the really mean is historical inadequacy, the fact that Suffragette doesn’t quite cover all the relevant information, particularly issues of race. A lot of people are complaining about race. Well, to them I’d just like to point out that it is a rare movie indeed that manages to cover everything. Indeed the suffrage movement had a fair amount of race tossed in, and quite a lot of class struggle, but mostly—overtly, obviously—gender politics. Well, Suffragette is about gender politics. It’s a little bit about class as well. It’s not about race. Y’all need to calm down. It’s okay. It didn’t cover everything you wanted it to cover, but you know what? It’s a movie. Anyway, it seems kind of pointless to only criticize a movie for what it isn’t. 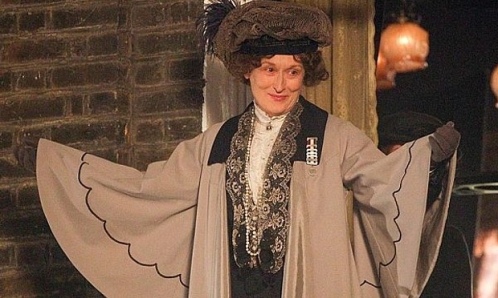 Film4
Pictured: What it isn’t. Meryl Streep only appears in one scene.

What it is, however, is badly directed. Like, really, really badly directed, and that is a much more serious problem. Close-ups and shaky-cam can both contribute to overall solid filmmaking if used well. Let’s say, hypothetically, that you want to establish the fact that Carey Mulligan’s character lives in an oppressive, restrictive society, so limiting that she finds it claustrophobic. In that case, it could benefit you to shoot a few scenes entirely in close-up, to make the viewer feel just as constricted as the character. Maybe you want to capture the confusion and chaos she feels when she accidentally gets caught up in a riot. Shaky-cam could certainly facilitate your efforts to capture those emotions. Alas, as I’ve said before, too much of a good thing will become a bad thing. Not can become, will become. Tragically, director Sarah Gavron overused both shaky-cam and close-ups not to the point that they lost their effect, but beyond that, to the point that they detracted heavily from the enjoyment of everything else that was going on.

And let’s be clear: everything else going on was superb. The quality of the performances matched exactly what you’d expect from the film’s stellar ensemble cast, including—in addition to Mulligan—Helena Bonham Carter, Meryl Streep, Ben Whishaw, Anne-Marie Duff, Brendan Gleeson, and Romola Garai. The flawless performances nicely complemented a strong screenplay by Abi Morgan. 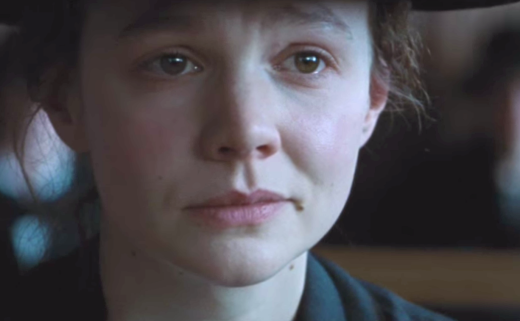 Film4
A close-up of Carey Mulligan is not an inherently bad thing.

It was really just the direction, which, yeah, totally sucked. But, like historical inaccuracy, no one ever seems to really care about poor direction. People unanimously loved The Imitation Game. Director Mortem Tyldum, despite what I can only assume were his best efforts, even received an Oscar nomination for that movie. What about Dallas Buyers Club and Wild, both directed by French-Canadian douchebag Jean-Marc Vallée. People loved those movies. I think the point I’m trying to make is that Suffragette does have some considerable flaws, but they should appear very familiar to everyone, and since they’re flaws that people are usually more than willing to forgive—if not ignore entirely—it seems strange to me that they should suddenly pick this movie to complain about. But what can I say? The crowds are nothing if not fickle.