I know that it’s named after a dude (Sir George Everest), but have you ever actually looked at that word? Ever-est. The most ever. What a perfectly fitting name for the highest mountain on Earth. Over five thousand people have attempted to reach the summit, the top of the world. Why? The most interesting answer I’ve seen (said in real life and spoken in this film by both Jason Clarke and Josh Brolin) is, “Because it’s there.” Something in the human spirit compels to conquest. We need to prove, over and over again, that we are the best, that we can do things no one else and nothing else can, because we can. This is perfect fodder for an existential conversation about human nature, humanity’s struggle against nature, and, most importantly, death. 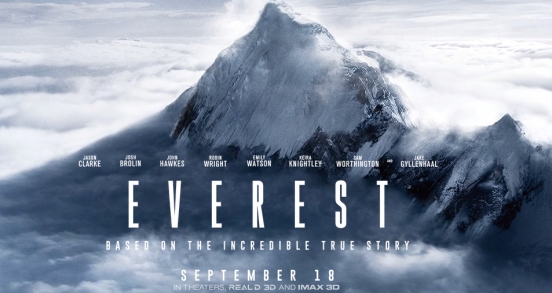 The Plot: In May of 1996 two expeditions attempted simultaneous summits of Mount Everest. When a cataclysmic storm hit just as the climbers reached the top of the world, both professionals and amateurs struggled alike against the most dangerous conditions on earth. Eight people died.

The disaster was recorded in a book by one of the climbers, journalist Jon Krakauer. I read that book, Into Thin Air, in one sitting. I was fourteen and had never done that before. It’s not a short book, and I don’t read very quickly, but I could not put it down. Krakauer’s account does not embellish, judge, or glorify. It delivers the story in a thought-provokingly frank manner. The movie Everest does not cite Into Thin Air as its source material, but perhaps should have. Like Krakauer, the filmmakers here don’t add much to the story. On the one hand, I appreciate the representation of real life, and the desire to not misappropriate the lives (and deaths) of real people. On the other hand, if you make a movie about real people dying and don’t use that to promote some artistic purpose, then aren’t you just capitalizing? 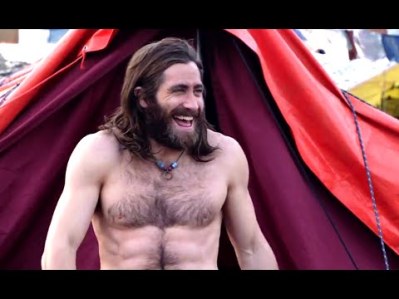 Jon Krakauer recently gave the film a particularly scathing review, criticizing Hollywood’s dramatic embellishment and claiming that the representation of events is “total bull.” I’m not exactly going out on a limb here to suggest that he probably knows whereof he speaks, but from a cinematic standpoint, I have to, awkwardly, disagree with him. Everest’s problem is not an overpowering dramatic lens, but a weak one. It tells a story, but doesn’t actually say anything. I usually try to criticize a movie for what it is, rather than focusing on what it isn’t, but it seems prudent here. Everest has everything it needs to achieve greatness. The film opens with a title informing the audience that one in four climbers fail to reach the summit of the mountain. It stresses the frailty of the human body; as expedition leader Rob Hall (Jason Clarke) so nicely puts it, “Human beings simply aren’t built to function at the cruising altitudes of a seven-forty-seven.” He tells his group that after a certain point, their bodies will be quite literally deteriorating. Sure enough, as the film progresses, we see this happen, but no one really talks about it. Over two hundred people have died attempting to climb Everest, and most of their bodies are still up there. In the film, we see only one frozen corpse. This might sound weird and insensitive, but I would have liked to see more. This is the perfect subject matter to make a powerful statement about the ultimate immortality of nature, how humanity is fighting a losing battle against it, and how we are, in fact, all meant to die, not to conquer the world. 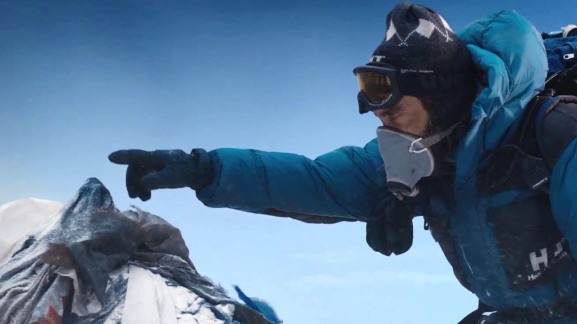 Universal
This was a great image, though: touching the highest point in the world. Imagine that.

But Everest doesn’t say any of these things. It’s a 3-D disaster/adventure movie based on an awe-inspiring true story. It’s an entertaining viewing experience, and that’s precisely what’s wrong with it. I shouldn’t have had any fun at all watching this movie. I should have found it soul-crushing and maybe even a little disturbing. But I didn’t.

I’ll give it one thing, though: a fabulous cast. The all-star cast includes Jason Clarke, Josh Brolin, Emily Watson, Sam Worthington, John Hawkes, Jake Gyllenhaal, Robin Wright, Elizabeth Debicki, and Keira Knightley. Everyone does an excellent job, providing layered, dedicated, tactful, and considerate portrayals of real people, all of whom are either still alive or died tragically. Either way, that’s not an easy thing to do.

Off-topic final thought: Keira Knightley is so movie-star thin that if you give her a pregnancy bump, she just looks like a normal person.