Gosh, it seems like a long time since I did one of these… probably because it’s been about ten months. After last year’s intensive Summer of Shakespeare, I guess I needed to take a break. Well, I’m back, and not entirely in a good mood this time. Why? Because…

The Plot: What if William Shakespeare (Rafe Spall) was not Harold Bloom’s supposed god among men? What if, rather, he was a drunken, incoherent, idiotic actor, and all of those plays (all those thirty-seven, well-documented, frequently performed plays) were actually penned in secret by Edward de Vere, Earl of Oxford (Rhys Ifans)? What if, you guys? I mean, we can’t prove that Shakespeare wrote those plays.

That’s true. We also can’t prove that he didn’t. Historical re-imagining is one thing; accurately defrauding is another. Anonymous has the pretense of truth all around it, as if it is settling, once and for all, a terrible and socially-engrained misconception, but backs it up with the care and accuracy of, well… I don’t want to say 300, but… let’s just say it’s considerably less accurate than any of Shakespeare’s definitely inaccurate histories. Here, the film commits its first disastrous folly: it wants to take down an accepted, but not certain history, but since its argument has no factual basis at all, and in order to sell its point it has to actively contradict definite truths backed up by hundreds of years of recorded evidence, the thesis of the film matches that of a badly written, poorly researched freshman term paper with the word “Nuh-uh” somewhere in the title.

This is also a curiously mean-spirited movie. It’s not enough for them to say that Shakespeare didn’t write the plays, but they feel the need to make him a bumbling, reprehensible fool as well. That’s kind of unnecessary. They also, completely without cause, if you ask me, take the stuffing out of poor old Ben Jonson. What did he do to deserve that? Furthermore, the Earl of Oxford doesn’t even come across as a particularly likable character. Actually, he hardly has any personality at all. His apparent motivations (for writing these thirty-seven very different plays) are mostly political, seeing power in mass-popularity, and he has nothing but smug confidence in himself, deriding the other contemporary playwrights. Just the thought of it all makes me wonder why the hell I should care.

Then, like all conspiracy theories, it goes a little too far and suffers some massive, gaping plot holes, like supposing that Oxford wrote A Midsummer Night’s Dream as a young lad and performed it for the queen. Let’s just ignore the estimated dates attached to that play’s initial drafts, and the well-documented first performance in 1605. Are we assuming that this kid wrote and performed this, one of Shakespeare’s most well-known and popular works, before an audience of the most politically powerful (re: literate) people in England, and then somehow, much later, someone else could pass off an identical play as an original work, in front of a similar audience? Sorry, but that’s just bad writing.

I’m not an expert on this topic, and I am certainly not criticizing the basic conceit of the film just because I personally disagree with it. A good movie should be able to sell any point to anyone. What Anonymous obsesses over, and what I think a lot of people do, is the idea that the person who wrote these incredible works of art is more important than the works themselves. Let us consider, as an example, Edward III. Scholars have hotly debated this play for decades, trying to figure out if Shakespeare wrote it or not. I see convincing arguments on both sides of this particular rift, but don’t have an opinion myself. Why? I just don’t care. Edward III is a great play and, in my opinion, fits in really well with the other histories. It’s got a good plot, great characters, and some really beautiful language. It works on many levels as an installment in the series of Richard II, the six Henry plays, and Richard III. Since we can never know for certain who wrote it, I don’t see why it matters. People just get greedy about information; they want what they can’t have, and once their minds are made up about something, that’s the end of it. 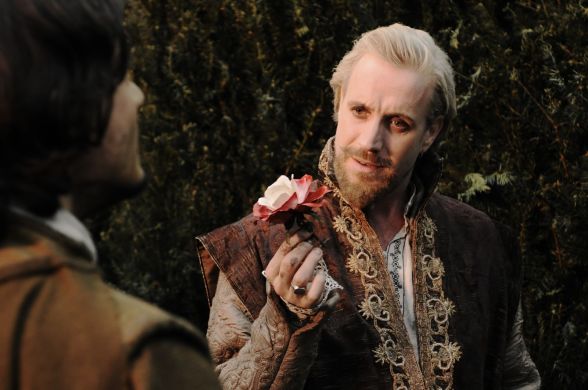 Columbia Pictures
You guys definitely didn’t earn the right to make that reference.

The truth is we don’t know much about who William Shakespeare actually was. We never have. And you know what? It has literally never mattered. Has Shakespeare’s uncertain biography ever, at any point in the last four hundred years, had any effect on the quality and popularity of those plays and poems? Oddly enough, no. No it hasn’t. Anonymous asks all the wrong questions and, for lack of convincing evidence, just makes up the answers.