Did you see the trailer to this movie? If not, please do; I’ve posted it below. If you have already seen it, then you know it warrants multiple views: this is a prime trailer. I plan on discussing it a fair amount in this article, so you should probably watch it. The point of this entire paragraph? Watch the damn trailer. Especially because I’m skipping my traditional plot summary this week, since the trailer delivers all the same information in a much more concise and flashy way.

Does that not look like a movie you want to see? With a winning combination of Paul Thomas Anderson (multiple Oscar-nominee for There Will Be Blood and The Master), Thomas Pynchon, and actors Joaquin Phoenix, Josh Brolin, Reese Witherspoon, Owen Wilson, Benicio del Toro, Eric Roberts, Martin Short, and just a bunch of others, an excellent soundtrack, a brilliant visual sense, fast-paced editing, and rampant hilarity, the Inherent Vice trailer achieves the much-coveted rank of “Probably the Best I’ve Seen in a While.” Seriously, studios and advertising teams the world over viciously compete every year for that prize.

Advertising is a dangerous game. A trailer should intrigue, hype, entice, entertain the viewer for about two minutes, deliver some exposition, and avoid spoilers. There’s a delicate formula behind this, a careful balance between what to show and what to conceal. The trailer to Inherent Vice committed a nasty sin, unfortunately, and packed in all the funniest moments. I think I may have laughed more during the trailer than during the actual film. Of course, just a couple weeks ago while reviewing A Most Violent Year, I made a big ole deal about not judging a movie based on your own expectations, and judging a movie based on what’s actually there, so for the sake of veering away from hypocrisy, I’ll close with this: taking them as separate entities, the trailer is a better piece of filmmaking than the movie, but the comparison is not unfair or even detrimental. 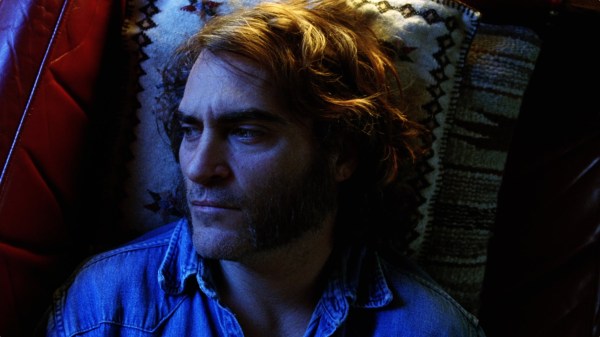 What do I mean by that? Yes, admittedly, the trailer represents the movie I wanted to see, but more importantly, it represents what the movie should and could have been. PTA’s comedic 70s noir has all the right elements, and all the same elements we see in the trailer, but none of them are realized quite to their full potential. The quip-laden, rapid fire dialogue occasionally succumbs to heavy exposition and explanation, in an effort to dilute the overly convoluted mystery. Now, I don’t know how familiar you are with film noir, but the quintessential detective narratives—the Raymond Chandler/Philip Marlowe stories—are packed full of characters who speak in witty one-liners and complex mysteries that twist and turn so much they’re impossible to follow, and in some cases solve. For example, in Chandler’s most famous novel, The Big Sleep, the mystery is infamously never solved, but the whole thing is so mesmerizingly intricate and entertaining that it’s easy not to realize that fact. The plot of Inherent Vice is just as riddled with tangents, false starts, red herrings, and characters, but for some reason devotes so much more of its time to plot than to people. At some point, I couldn’t tell whether or not the driving force of the movie was the mystery or the relationship between Doc (Phoenix) and Shasta (his “ex-old lady,” Katherine Waterston). It should have been the latter. Instead, what happens is Doc investigates his mystery and as an afterthought in every scene asks someone if they know how Shasta is involved. Strangely, Anderson seems much more interested in making sure the audience has a chance to understand the mystery than to ensure we understand the characters.

Warner Bros.
Yeah, he sure does look like the crime-solving type. Jinkies.

If you add to that the somewhat bizarre motif that runs throughout, I left a little less satisfied than I should have. Okay, kids, let’s talk about sex. Motifs are great; they lend a visual coherence to a story, a sense of context, a thematic unity, whatever, and PTA ain’t no stranger to motifs. I am not saying what I am about to say as a prudish viewer or an embarrassed thirteen-year-old who made the mistake of watching this movie with his mom: sex makes for a weird motif. I found the presence and prominence of sex in this film to be a wee bit disconcerting. Most of the time it doesn’t bear much discernable relevance to the plot or the characters, but it’s there in almost every scene, and I found it frequently quite distracting. Funky stuff.

Warner Bros.
Although… I guess the poster should have given me that impression going in.

None of this is to say that Inherent Vice is a bad movie, or even that I didn’t like it; I did. Joaquin Phoenix and Josh Brolin stand out with exceptional performances amid a strong ensemble cast, and their relationship (two detectives on opposite ends of the propriety spectrum who hate each other but recognize each other’s value) is hilarious and expertly realized, but it’s about the only relationship in the movie that is. Anderson also achieves a great sense of setting, as always, aided by wonderful costumes and a killer soundtrack. Ultimately, though, Inherent Vice left me feeling a little empty. I didn’t love it; I didn’t hate it; I liked most of what I saw, but it just wasn’t enough. Still, I find myself watching and rewatching that trailer. Ah, hell. I’m gonna do it again.