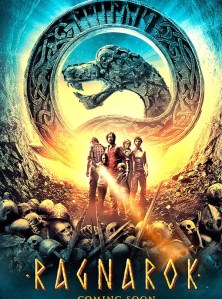 Lesson – Sometimes the map is a warning.

This week I decided to check out the quietly-lurking Norwegian film Ragnarok. Based on the description, it could have gone a few ways, but in any event it was a horror movie about history and archaeology, so, sign me up. It ended up being a really great little monster movie, and one I would highly recommend! It is in Norwegian, which is an auditory plus but it does require the reading of subtitles. Some spoilers below, so proceed with caution.

Researcher Sigurd is brought a stone tablet by his friend Allan. It suggests a certain tribe of Vikings traveled much farther North than he ever anticipated, and cements some of the theories he’s recently been positing. The stone itself, encrypted via a brooch the research facility/museum already had, tells a small tale of finding the eye of Odin and a father’s foolishness, as well as some directions to the site of…something. Naturally excited, he brings his children north to Finnmark to check out the site. He’s a single dad, which is a shockingly minor part of the story, but that’s why the kids have to come along, so there’s that. They meet up with Allan’s friend Elisabeth and their guide/driver Leif.

Arguably the appeal of this movie is that it doesn’t try super hard to be clever. The history is at the forefront, and I actually learned a decent about about Norse mythology and culture while I was watching, which is something really nice. The characters are straight-forward and appropriately complex. Sigurd is a single dad with a teenager and a precocious son. He’s sad about his dead wife, which causes him to throw himself into his work just a little harder. Allan is a cheeky friend, clearly differently motivated. Elisabeth is a fantastically abled woman who frequently makes the snap decisions and gets the group out of trouble. Leif is the layman, and his betrayal is not surprising.

I mentioned that this is a monster movie – it’s heartily implied throughout that this is a Norse monster, which I admittedly know very little about. The monster design is fantastic. Now, I do confess to loving a good monster movie. It’s kind of a weakness of mine. I know I rave a lot about cool things, but when the design is bad, I’m disappointed. Have no fear! The design in Ragnarok is amazing.  I could probably talk for a while about all of the nuances that went on in this monster design, but really what is important is that the digital animation work is given the appropriate amount of attention that it needs. The sound work supplements everything, and ultimately what we end up with is a fully developed monster.

Education time! There’s a Norse myth of the dragon Fafnir slain by a hero named Sigurd. I’m assuming the naming convention here is extremely intentional, although it was admittedly lost on me during the film. The monster, however, is not a dragon. This may be the only case where the phrase ‘not a dragon’ is not disappointing, because, again, the design is so well-executed. Stylistically, Ragnarok is clearly influenced by Jurassic Park, including some very distinct cinematic parallels that are debatably shot-for-shot. Now, as I’ve discussed many times, I tend to really enjoy a film that calls back to the classics (it pains me that Jurassic Park is now a ‘classic’, but it is 20+ years old…so…) in an effective way. Ragnarok does this very well.

Overall, this felt like a really effortless movie. It’s an easy monster film to digest and it has very cool moments, genuine heart, awesome creature design and great characters in a beautiful setting.