You know those moments in life where you have to do something you’ll regret because it’s the only way you can learn? Sure, plenty of warning signs might have been put in place as you went bombarding through them. Friends and loved ones may have advised you against your destructive actions and maybe you wanted to heed their advice, but deep down you knew you wouldn’t listen to them. Even though you knew doing so could destroy you, you proceeded with equal parts daring and quaking curiosity, knowing deep down you not only wanted to commit your sin, you needed to.

The point I’m trying to make, I guess, is that I watched Sunday’s Family Guy crossover with The Simpsons.

As a lifelong Simpsons fan who admittedly subscribes to the common wisdom that the show’s halcyon days are behind them (the new seasons middling premier didn’t help) and as someone whose enthusiasm for Family Guy has dwindled pretty markedly over the past several years, to say that I was less than thrilled about the crossover would be an understatement hovering somewhere between “the Hindenburg explosion was kind of a drag” or “John Wilkes Booth wasn’t really vibeing with what Lincoln was laying down” in terms of severity. But, a combination of failed self-restraint and journalistic integrity (the six of you who actually read this will remember that promise here) led me astray my better judgement and in front of Fox for an hour this past weekend. And, while “The Simpson’s Guy” might not have been the eldritch monstrosity that I believed it would be, it wasn’t much better. 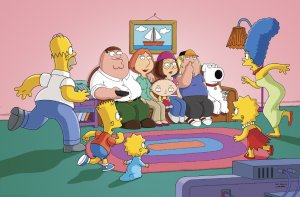 The plot: Peter creates a smash hit comic strip that runs in the Quahog newspaper, but finds success short-lived after a violent reaction to a series of misogynistic cartoons sets in motion the plot device that sees the Griffins hiding out in Springfield. Immediately upon arriving in town, the family car is stolen and forcing the Griffins to scrounge for food at the Kwik-E-Mart, where the Griffins run into none other than Jay Sherman of The Critic. Just kidding, he runs into Homer.The Griffins are taken in at Evergreen Terrace while the families search for the missing car while Homer and Peter become fast friends. After another plot device dictates the car show up again, the corpulent cartoon men celebrate with a drink at Moe’s. But when Peter tries to present Homer with a six-pack of his hometown Pawtucket Patriot Ale, Homer is shocked and disgusted to find it is a cheap rip-off of Duff. Duff sues Pawtucket for creating a cheap imitation of an iconic property, because subtlety is for King of the Hill. Homer and Peter have an extended fight scene. They become irradiated, muscle-bound warriors for a while, I guess. Eventually they decide to put their differences aside and accept each other and the two families of Fox’s Sunday lineup part ways on more or less good terms.

The show sets the tone for what’s to follow with the Griffin’s watching an All in the Family/ Modern Family crossover and Chris making a speech about how crossovers are totally a creative endeavor and in no way an attempt a quick, crowd-pleasing cash-grab, before he is told to shut up by his family. The episode is filled with this kind of self-referential meta-humor, but the execution never really works well. Family Guy doesn’t use their acknowledgement of the tropes and clichés of the crossover as a springboard to do something different or unexpected, but rather as a way to indulge in these tropes and clichés with air quotes around them for a stab at ironic distance. This ironic by-the-numbers approach translates into a wildly uneven plot structure that swerves dramatically from a loosely plotted collection of gags to a heavy-handed allegory for the two shows at the midway mark. The show makes no attempt to make the stolen car plot anything more than an excuse for the Griffins to have an extended stay in Springfield. When the car stops outside the Simpsons house after hitting Peter and a pantsless Moleman gets out of the car and says he was using the car as pants, it doesn’t feel like a commentary on improbable crossovers, it just feels lazy.

The Duff lawsuit plot isn’t necessarily a bad idea but, again, the execution leaves little to be desired. Hearing Homer and Peter have the same conversation about their choice in beer that people have been having about The Simpsons and Family Guy for years was funny at times, but quickly became tiring after it was clear that this was going to be the recurring joke for the next twenty minutes. The lawsuit hits the notes you expect it to, but doesn’t rise above those marks. The transition from a collection of gags to focusing on one extended, plot contingent joke feels forced. “The Simpsons Guy” tries to have it both ways and hinders itself in the process. 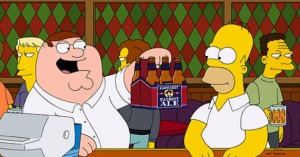 20th Century Fox Television
“Anyway, the script says we should have a plot now.”

As you might expect, much of the humor stems from having these characters interact with each other and react to the classic moments and jokes of their respective shows, and the results are hit or miss. Some feel natural, like Peter trying to get a confused Homer to set up a cutaway gag, but others fall flat. Despite The Simpsons having not done a prank call to Moe in four years (I Googled it), they do one here just so they can have Stewie try one. Having Stewie gleefully call Moe and shout that his sister is being raped doesn’t do much to add much insight into the prank call gag, but definitely reminded me why I don’t watch Family Guy anymore. The Homer and Peter fight at the end is obviously a tribute to Peter’s brawls with the giant chicken on Family Guy, but over-the-top brawl goes on for way longer than it needs to. I get it. Watching Homer and Peter fight is kind of inevitable, but having the fight last six and a half minutes seems kind of excessive. Moments like Homer attacking Peter with his wall of Emmys are funny, but the whole thing feels like it could have been half the length and been just as effective. 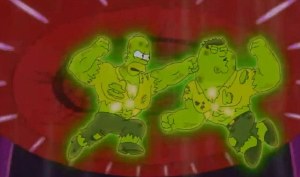 The funniest moments of the episode don’t come from rehashing classic material, but purely in character. Lisa feeling sad for Meg while also being creeped out by her was funny, and the gag with Meg being better than Lisa at playing the sax could have been developed into something greater, but there seems to be a mandate on making sure Meg never gets screen time or be anything but a punching bag. Brian’s frustrated interactions with a mindlessly enthusiastic Santa’s Little Helper were actually incredibly funny, his wit lost on the Simpsons family dog. The pairing of character in the courtroom of the Duff case was also a source of solid laughs. Quagmire conceding that he doesn’t have much in common with Lenny aside from their status as “friend of main character” and Carl and Cleveland thinking they’re sitting next to each other because they’re the funniest guys in their town. Simpsons James Woods and Family Guy James Woods was an excellent cap to the gag. I’ll also admit that a scene with Homer and Peter rocking Daisy Dukes and washing cars to “Pour Some Sugar On Me” was far funnier than I thought it would be, even if the image will be burned onto my brain forever. Bob Belcher cameos during a cutaway gag was a nice nod to the current Fox lineup, even if Peter’s comment that their shows are carrying Bob’s seems pretty dubious in an era where Bob’s Burgers dominates both as the critical darling and heir apparent to animated primetime sovereignty. 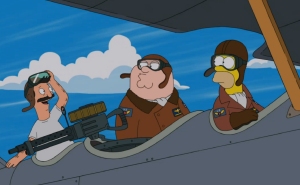 “The Simpsons Guy” was kind of a mess. A couple nuggets of really solid humor were sprinkled throughout, but not enough to readily suggest sitting down for an hour to watch this. Despite the surface similarities that the episode makes a big deal of pointing out, the humor of The Simpsons and Family Guy are worlds apart, and this crossover doesn’t do much to serve either. The episode acknowledges that most crossover events are a disappointment, but doesn’t do nearly enough to separate itself from this trend.

One thought on “A Bomb in the Lasagna: “The Simpsons Guy” Was Slightly Less Horrible Than I Imagined”