There are precious few moments in 20th century pop culture that have been explored as widely and deeply in books, magazines, and films as the ten years during which The Beatles were performing and making music together. The basic arc of their story, from ragtag Liverpudlian club band to pop music innovators, has been told, parodied, and told yet again everywhere from the pages of Marvel Comics, to episodes of The Simpsons, to trashy TV movies. To quote George Harrison from that most wonderful of Simpsons appearances, “it’s been done”. If divulging new information isn’t the goal, then, doing something novel and entertaining with old facts is as good as any. The Beatles: Eight Days a Week- The Touring Years, directed by Ron Howard and released onto Hulu following a limited theatrical engagement, is an account of the first half of The Beatles’ career armed to the teeth with celebrity interviews, snazzy production values, and an arsenal of restored archival footage that’s told with exuberance, genuine enthusiasm, and even a few surprises along the way.

As one might expect from a documentary about The Beatles touring years, the group’s music and performances are front and center. Eight Days a Week is neatly packed with all the studio outtakes and archival interviews with the deceased John Lennon and George Harrison, but it’s the live footage and the music being performed that earn the highest accolades. The film makes the case for the band’s live performances –be they in the dingy clubs of Hamburg, a TV studio, or most notoriously in Shea Stadium– that served as the engine that propelled the band into unimaginable stardom. It’s not a difficult argument to  buy; the footage (particularly the restored audio) captures the freneticism and raw magnetic appeal of The Beatles live performances in a way that even the best music docs sometimes fail to do. The audio and video editing teams knock it out of the park, cutting together footage of performance, fan reactions and interviews, and promotional material from the era in a way that’s genuinely exciting to watch. 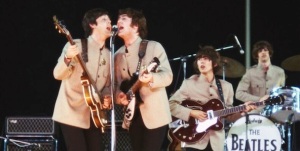 Apple Corps, Imagine Entertainment Y’know, I think these guys might have a future in this business.

Eight Days a Week looks at the band both as four individuals as well as unstoppable cultural force, and it’s the latter that proves to be the most unique. Beatles narratives, both in real accounts and fictional accounts such as A Hard Day’s Night take the view of fans as an irrepressible force, and it’s fascinating seeing a somewhat similar view of the band from the perspective of fans. A delightful interview with Sigourney Weaver (accompanied with archival footage of a tweenage Weaver outside a Beatles show) portrays The Beatles as unknowable entity, while interviews with Whoopi Goldberg detail the band as a race-transcendent cultural force. The most interesting perspective comes from Dr. Kitty Oliver, recounting how in many towns across the south, the band refused to play to segregated audiences, and that the show she attended as a teenager was the first racially integrated concer to play in her community. If the film occasionally smacks of unbridled, glowing Baby Boomer nostalgia (and does it ever) it’s perhaps to be expected in a retrospective about the most influential band of the 20th century featuring celebrities recounting their youth directed by Ron Howard.

Where the film falters slightly is in its attempts to look beyond its (if I’m being honest kinda long) title. While the film proclaims to be an examination of the Beatles years on the road, it can’t resist taking a peek at the music made during the latter half of The Beatles career. There are many words on the production of Sgt. Pepper’s Lonely Hearts Club Band that only mostly feels motivated by a desire to have a scene that ends on the famous ending crescendo from “A Day in the Life”. The film starts to run out of steam before the credits roll, but not enough to detract from the film’s energy. The theatrical release of the film was capped with a restoration of the 30 minute TV documentary The Beatles at Shea Stadium, which is on its own a fascinating document of a defining moment in the band’s career, but couldn’t help but be redundant at the end of a 97 minute documentary. It’s great footage, and a treat to watch, but feels like a Blu Ray bonus feature awkwardly attached to the main attraction.

Like the music being paid homage, The Beatles: Eight Days a Week – The Touring Years is bubbly, energetic, and pretty irresistible. While it might not be essential watching, it’s an excellent crash course in what makes The Beatles the phenomenon they are.