Hey, Archer fans. James here. I’ve gotten a little behind on these recaps, what with all the movie reviews and cannibalism, but this week…everything changes. Well, not everything. I’m gonna do my best to catch up, though. So there’s that.

The main focus of “Baby Shower” is, you guessed it, Kenny Loggins. That’s two episodes in a row dedicated to one of Archer’s fanboy obsessions. The show is at its best when it’s being, y’know, itself. I get that all the pop culture references are part of the flavor, and the “dangah zone” line is always funny, but those aren’t the things that define the show. Or, they weren’t. Archer Vice has mostly just been call-backs and episodes centered on obscure pop culture references. 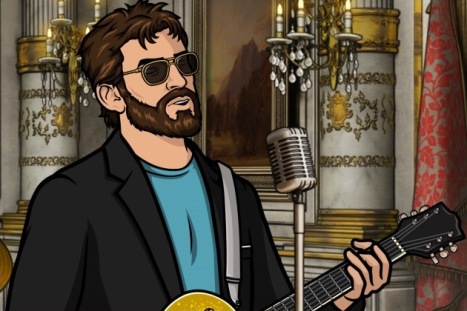 Seriously, I can’t be the only one who doesn’t know anything beyond “Danger Zone.”
Source

“Baby Shower” starts with an irritated Lana interrupting one of Charlene’s rehearsals at 5 in the morning. The band line-up reads like a TeeFury design, but at least the scene sets up, uh…the fact that Lana is irritated? A lot? Man, that just isn’t like her.

Soon, Mallory is chewing everyone out for not selling any cocaine, and Krieger reveals that he’s been selling it online using what is basically a Silk Road/bit coin system. That actually seems pretty clever, which of course means that it won’t work. Before Pam lets that slip, Ray points out that they haven’t thrown Lana a baby shower yet. Mallory sends Ray and Cyril to help Krieger pack the cocaine, and puts Archer and Pam in charge of the shower. Cherlene goes off to practice being a gimmick.

Because this is what basically amounts to a Very Special Episode, Archer realizes that Kenny Loggins is in town, and promptly decides that his hero is going to play at Lana’s baby shower. Their first meeting goes about as well as you would expect. Kenny-Log brushes Archer off, then has his hulking bodyguard Ricky taze our star struck hero.

What the shit, Loggins?
Source

While the rest of the gang continues to bicker in the house, Archer and Pam head up to K-Log’s penthouse suite disguised as staff. That…also doesn’t go well. A combination of Pam’s mouth and Archer’s fake mustache quickly blows their cover, and soon Pam is duking out with Ricky, and Archer is having a shootout with Kenny Loggins. It turns out that K-Log thinks that Archer was sent by someone named Borgnar to steal a mysterious glowing briefcase. The fight ends in a glass-bottomed balcony pool, which inevitably shatters, leaving Archer and K-Log hanging on for dear life.

Once K-Log realizes that Archer isn’t after the case, he agrees to play Lana’s baby shower to make up for all the gunplay. Back at the mansion, everyone surprises Lana with the party, gathering to give her presents and stuff. K-Log and Cherlene do a country duet of “Danger Zone.” Since that is an incredibly selfish present, Woodhouse comes in at the last minute to give Lana Archer’s crib, which is both really expensive and a sweet gesture.

The episode ends with everyone realizing that Krieger has been selling the cocaine to himself, because, ugh, of course he has.

Cherlene: What have I told you about staying on the wall, ghosts?

Honestly, it’s kind of hard to pick, and not in a good way. I guess this episode was pretty funny, but it left a lot to be desired. If I had to pick something—which I do—I’d go with the “golden hour” joke. It made me laugh. I also enjoyed Cyril’s “please take me back.” It’s kind of at odds with the more asshole-ish version of him that we’ve seen so far this season, but it’s nice to be reminded that he is, at his core, a pathetic loser. Archer’s realization that he’s no longer a spy was welcome, though I might have appreciated it more three or four episodes ago.

Just, like, a heavy goddamn sigh. I wanted so much more from you, Archer Vice. Is it my fault? Were my expectations too high? Or are you really just treading water? Either way, the current season is pretty underwhelming so far. For an episode with Kenny goddamn Loggins, “Baby Shower” feels as stagnant as everything Archer Vice has served up so far. Still, there are seven episodes in left in the season, so I’m still hopeful that they’ll turn everything around.