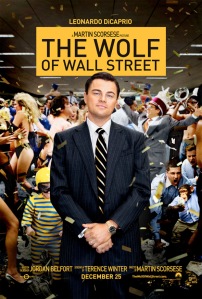 The Plot: Jordan Belfort (Leonardo DiCaprio) is a total scumbag. His main goal in life is to get rich, and wouldn’t ya know it, that’s a goal you can accomplish by working on Wall Street and being a total scumbag. The film briefly follows Belfort’s rise from greedy kid to coked out shithead, then spends quite a bit of time with Belfort the coked out shithead with a lot of money, then transitions nicely to Belfort the sober shithead with significantly less money than he had before. There are also supporting characters, and they are all either other coked out shitheads or victims of Belfort’s insatiable greed and impenetrable ego. Oh, and one FBI guy (Kyle Chandler). It’s also worth noting that this is all based on a True Story, so you can go to Wikipedia for a less snarky plot synopsis.

Clocking in at around three hours long, Scorsese’s latest is exhilarating, exhausting, despicable, and deeply critical of the grotesque excess that defines a certain breed of the super-rich. The Wolf of Wall Street is a satire; one without much room for subtlety. Though this film clearly comes from a very angry place, that point of view is never imposed. Scorsese and writer Terence Winter never stoop to moralizing. All they have to do is show coked out shitheads being coked out shitheads, and the audience has everything it needs to judge away. I should probably add that, for the most part, watching Belfort and Friends be terrible people is hugely entertaining.  There’s a part of us, however happy we may be, that wouldn’t mind living that life of gleeful amorality. And that’s the point of the film. Well, one of the points. It’s right up there with “Jesus, This Guy Was a Scumbag.”

That message—that “everybody wants to be rich”—is beautifully illustrated in the film’s closing shot. Fresh out of prison, Belfort has turned to motivational speaking. As charismatic as ever, he works his way down the first row of the greedy sad sacks/normal people in his audience, telling each person to sell him the pen he’s holding up. As sad sack/normal person number five’s pathetic attempts fade into white noise, the camera pans over the crowd. Normal people, enthralled by the possibility of fast cash, tantalized by stories of the sordid life led by the man in front of them. That’s us. We’re the poor saps dumb enough to give guys like Belfort all that money, shallow enough to fuel that lifestyle simply by looking on and wishing it was us throwing dwarves at a giant dartboard. But Scorsese and Winter aren’t judging us any more than they’re judging Belfort. They’re just showing what’s there. Maybe some of the parties are a little exaggerated, and maybe nobody but Keith Richards could survive for so long on such a diverse cocktail of drugs and alcohol, but The Wolf of Wall Street is real in its own way. To quote Neil Gaiman, like the hip little nerd that I am: “Things need not have happened to be true.”* 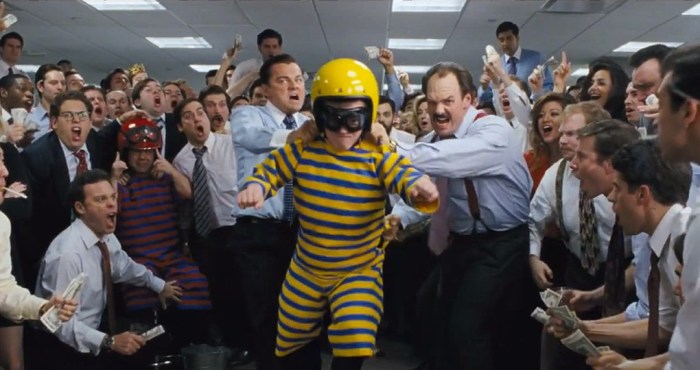 They do look like they’re having fun, though.
(Source: http://bit.ly/1cOwEY3)

Again, The Wolf of Wall Street is a very entertaining movie. Scorsese uses every minute of those three hours, filling the screen with wall-to-wall depravity. Unless you’re dedicated to your disdain, there isn’t much time for passing judgment. More than that, it is fun to watch this scumbag having such a great time. Almost everything Belfort does appeals to our baser instincts, or that part of us that’s latched onto a corrupted version of the American Dream. There’s sex, drugs, alcohol, and a flagrant disregard for pretty much anybody that isn’t Jordan Belfort. This is a guy that breaks through taboos like eggshells and never, ever, feels bad about the laws he’s broken or the people he’s hurt. You know he’s bad, that he’s with “Them” in an “Us vs.” type situation, but Leonardo Di Caprio really sells Belfort as a guy you want to be around, even if you’re pretty sure he’s human garbage. 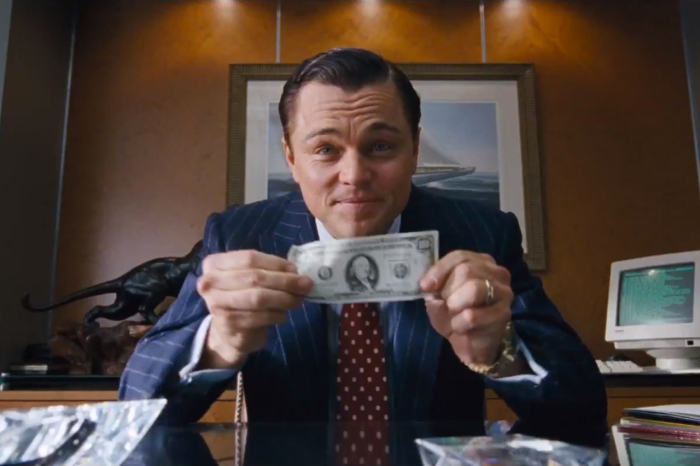 It’s an amazing, dedicated performance. Charismatic, bombastic, other words ending in “ic,” Di Caprio plays Belfort as man who’s cunning and self-assured, yet totally devoid of any self-awareness. There’s never a moment where you don’t believe that this cartoonish, drug-addicted monster is real. And however much we may want to distance ourselves from that monster, we follow him willingly as he parties his way to self-destruction. Also, it’s impossible not to enjoy the scene where Belfort, high out of his mind on Quaaludes, tries to get into a car. That is some damn fine physical comedy. Damn fine.

I should probably talk about the supporting cast, or the fact that this isn’t Goodfellas, but this thing is getting kind of long, and I have work in the morning. So here’re some closing remarks:

The Wolf of Wall Street is one of the best movies to come out in 2013. It’s angry, energetic, and funny in ways that sometimes make you question your moral compass. Scorsese is still Scorsese, and Di Caprio gives a truly outstanding performance. You’ll walk out of the theater slightly dazed, but as feeling returns to your face and gears start again, you may very well say: “dang, that shit was tight.”

9 thoughts on “Rooster Illusion: ‘The Wolf of Wall Street’”