Sorry about the lateness – I was on vacation, and then grad school happened again, blah blah I was busy.

I love Jenny! Let’s have more Jenny! And…uh, Katrina, I guess? She’s not super fleshed out yet, so I find myself not really caring.

We start this episode out with some straight-up Evil Dead references. Good on ya, Fox! Then they start with some good old Ichabod modern-day bashing, and I’m torn because the McDonald’s Scottish-food reference is funny, the Thanksgiving tirade is not. This is followed by some more stellar detective work, a.k.a. plot conveniences, and they’ve tracked the now dead-via-tree rich lady to Sleepy Hollow by her car, and not the person she was on the phone with. Or her bodyguard. They also don’t seem to know her car is at a specific house, just…in town. That being said, this house in question, with the killer tree, may have belonged to Katrina, or, something. BUT HEY, it’s cool, ‘cus, remember, Ichabod knows everything about everyone and he can figure out where she is because he knows the dead woman’s maiden name. GOD. 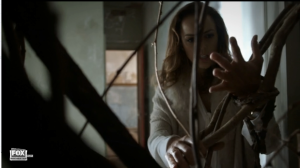 Of course, now we discover what happened to the bodyguard. There may be a critter on the loose. Or, haunting, or something. Actually, it’s kind of creepy, to be honest. Abbie, of course, being Abbie, scuttles around the house looking for a woman (a ghost) calling out about the being from the Sheriff’s department. Also, qu’elle surprise, the rich lady isn’t dead! Well, she is pretty deeply linked to the roots, which are also people, which, y’know, are Ents. I also don’t get anything about the stupid ‘struggle signs’ in the house, when Katrina (the rich lady) was ambushed by the tree in a closet, then held in the closet…so…not a lot of meandering.

Katrina what is on your head I can’t even

Also, I love Jenny and the Captain, but I SWEAR if there’s romance there I’ll be so mad. That being said, I love his sassy daughter Macy, and I hope that her and Jenny will be best friends. She over-shares though. Bonding~!

BOMB DROP. KATRINA TOTALLY HAD A BABY. Ichabod is a dad! Whaaaaaat? Who’s the descendant!? It’d better not be that annoying rich woman. She’s awful. And I don’t want her to be recurring. And Ichabod gets to find out that he has a son via vision-in-a-haunted-house. That’s how I’ll deliver the news if I ever get pregnant.

Some more stuff happens, and there’s a point at which the episode transcends ‘creepy television’ and right into ‘tacky horror movie’. I don’t know what it is precisely. Something about the camerawork that really doesn’t do them any favors.

So, actually, this week, I didn’t really like the action-y parts, because they felt very cheap. There wasn’t really any resolution, either, other than Ichabod being an angsty dad now. On a side note, does the prop department even know how BOXES work!?