James here. The time has come. The stars are aligned. We have broken the final seal. It is Halloween. Today. Right now. Unless you’re reading this, like, in November. But we’re posting it on Hallow—goddamnit, the moment’s gone.

Anyway, Sarah and I are joining forces this week to give you the ultimate Octoberween experience. United, we faced our greatest challenge yet: The Human Centipede. It…was actually pretty underwhelming.

The Plot: Two American sorority girl stereotypes (Ashley C. Williams and Ashlynn Yennie) get lost in the woods of Germany after their car breaks down. They seek shelter at the house of a creepy German dude (the wonderfully-named Dieter Laser), and wouldn’t ya know it, he’s a mad scientist! Hilarity ensues. 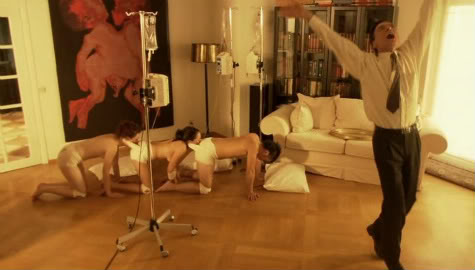 Hi James! Where do we even start?

At the beginning, I guess. I said earlier that it was underwhelming, so let’s break that shit down, yo. Readers love it when we back up our wild claims.

That is a documented fact. So is that I’ve seen some stupid films in my day. I would wager it’s fair to say it’d be hard to ‘shock’ either of us? That being said, Human Centipede was, to its credit, pretty darn gross at times. It is definitely a little gross. There were just too many wasted opportunities.

Yep. They pretty much just had that one idea. And while it is, admittedly, totally nasty, that’s it. Everything else is recycled from like a billion other horror movies. Human Centipede needed, I don’t know, some cannibals or witches or something. I think Roger Ebert said he thought it was intended to be a “Midnight Movie,” but it doesn’t even function on that level. Because those movies are supposed to be fun, and kind of crazy. This was too serious to be fun, and too cheesy to be serious. No bueno.

These diagrams were kind of hard to take seriously.

It seemed like we kept coming back to the ‘almost-subversive’ qualities, like how campy and ridiculous the girls were. An…uber-trope, if you will. But it never lasted long, and wasn’t ever consistent enough to be truly funny, or meta, or scary. It wasn’t even that special Tarantino brand of “oh god why am I laughing this isn’t funny at all.”

Exactly. I think Tom Six expected the concept to be enough, although I guess it kind of was? Kind of? Everybody’s heard of the movie, even if nobody I know really wants to see it. Ultimately, though, once you’ve seen a human centipede, you get used to it pretty quickly. Oh God, I can’t believe I just typed that. Ugh. Damn you, Tom Six.

I think that’s giving it too much credit. It is both of those things, but manages to mirror its antagonist without adding any substance. I don’t think it has the sense to style itself after the central figure in order to comment on that figure. That having been said, I really wish they had done that, and you can totally see where those parallels could have lead to a better movie. It’s like you said: almost subversive.

That’s fair, I was wondering merely if it contributed to the thought process. We both commented on the effectiveness on the sets/cinematography while we were watching. Definitely one of the better parts of the film overall.

That is some pretty tight shot composition.

Absolutely. Which is part of what makes it so frustrating. In spite of all that, it’s still listless.

I have to do my schtick as SFX aficionado and talk about that, too, because it’s a large part of the plot.

And one of the few parts of the movie that works. Also, it’s always fun to hear you talk about SFX.

For the most part, yeah, I thought the makeup contributed. The actual human centipede itself was kind of…wrapped up, although I don’t know what I was expecting. There is some makeup on the faces of the unfortunate souls, and it gets infected as a wound of that nature might. There is a caning scene, and the victims bear those marks consistently. HOWEVER, the good doctor loses an entire ear, and that ear magically grows back and I was dissapoint.

Well, he is a doctor.

Sorry. But yeah. The makeup was, for the most part, convincing and consistent. Much more so than the film’s entertainment value, or the intelligence of the characters.

Yes, you can always tell when the tech crew cares about the film they’re working on. It’s nice, when the rest of a movie is odd, or whatever, that someone definitely cared. I think the actors might have cared, because they did an amazeballs job with a whackjob thing of a movie.

Right, everybody committed. I always appreciate that. It’s too bad that the script couldn’t decide if it wanted them to be serious and grounded or over-the-top caricatures.

I think the Japanese actor was like, “balls to the walls? SURE” and they couldn’t tone him down no matter what. I didn’t hate it.

Dude totally gets it.

Although ya gotta respect the actresses, especially the one who plays B, for trying to play it straight. She may have been in a whackjob thing of a movie, which is just the best phrase, by the way, but damned if she wasn’t going to use all of her Acting.

Yeah, and, we both enjoyed Dieter as the villain. There was a lot going for this movie, but it gets kind of overwhelmed by the non-committal mediocrity of the plot. I’m not even sure ‘plot’ is the right word. More like…

Stuff that happens? “Plot” makes it sound way more structured than it should get credit for being.

The Human Centipede: Less than the sum of its parts.

The Human Centipede: Just a few dozen legs short of the real deal.

Annnnd on that note…

Well, there you have it. You wanted a long review of The Human Centipede, and we delivered. Never forget our sacrifice.

One thought on “Octoberween Team-Up: The Human Centipede”