Lesson: It could be life saving to learn some vocabulary for the country you’ll be visiting.

So, to be fair, I’m not reviewing the movie I -wanted- to review. That movie is called Prey, or sometimes, The Outback: Dreamtime’s Over depending on what country you’re in. As you’ll see in November, I’ve already watched a French movie thinking it was the right one, also called Prey, but from a year later. This movie eludes me on the internet.

To be even more fair, The Ruins is not strictly an Australian movie, but an American-Australian collaboration. I have wanted to see it for a while, and I remember trailers on television for it when I was a tyke (high school student). It looks like one of those movies where they designed the poster before seeing the movie. It happens.

The movie begins with some pizazz, someone already trapped and clearly terrified. Decent kickoff. After that it’s a pretty standard teen spring break sort of thing. Two couples, on vacation, meet up with another German tourist. Only the German’s brother is an archaeologist, on a dig, and apparently the dig is pretty cool. They agree as a group to go and check it out.

It’s pretty standard horror fare, to be honest, with the group dynamics and what not. One couple is a bit more sexual than the other (sure to die first) but the other girl cheats. There’s standard ‘ew a hike’ banter, and some creepy signals. A taxi cab is reluctant to take them to the path, there’s some random girls in the forest (indigenous, I’m sure) and there’s foreboding talk of the civilization who came before them.

They eventually get to the dig, and things escalate. Men emerge from the forest and begin yelling, frantic, but in Spanish (possibly a local dialect?) I don’t speak any Spanish, so I am totally at a loss here. In any case, someone gets shot in the shoulder with an arrow. And then shot in the head for good measure, which of course leads to the hilarious memory, “Remember when we went hiking in the Mayan ruins and that guy shot your friend? We had to high tail it up the pyramid, haha, hilarious.” At this point, things really start to add up, as all of Matthias’ (German man) brother’s things are intact, but no people are around. The locals also refuse to scale the pyramid. Matthias then finds his brother, wrapped in foliage. My German is better than my Spanish, so I know that he cries, “Heinrich! Oh God, no, why!?”

The Australian influence in this movie is clearly that the characters are permitted to make educated decisions. They are not completely helpless, despite obvious obstacles. The girls are frantic, but not silly.  However, there is this moment, where they have to lower a character down to get another character out, and the rope is too short, so she has to jump. Which begs the question…jumping down is fine, but…jumping up? Sometimes I go through a horror movie thinking I could survive, and other times I know I’d be the second one gone. This is the latter.

It soon becomes abundantly clear that the vines are the real issue, and the locals will not touch them, actually avoid them to some severe dedication. The cinematography achieves this gloriously with small subtle low shots of the tourists and the vines, and it’s confirmed about 40 minutes in. At this point, you would assume the tourists would stop touching the vines. This is not the case. As a result, we soon discover the vines have a taste for human blood. They also prefer to be inside human flesh. Creepy. (This is the only thing I remember from the trailers, five years ago. Vines under the skin.) Also, the vines are at least a tiny bit sentient, which is delightful – but at times a little corny.

The 60 minute mark brings a healthy dose of reality, which is good, because I was honestly loosing focus. In a horror film, sometimes you just give up caring about the characters because of the inevitability of their death, and the method no longer shocks you. So despite Jeff insisting that someone would find them, I basically was like, ‘Eh.’ But, good on the filmmakers, because they jazzed it up a bit, courtesy of some amputation and some sweet prosthetics.

From then on the movie plods towards various deaths at a steady rate. I will never understand a human being’s selfishness when it comes to escaping a quarantined area. Probably because I’ve never been in the situation, but, still. If people are willing to shoot children over the issue, like, you probably shouldn’t run and inflict it upon the world. Just a suggestion. 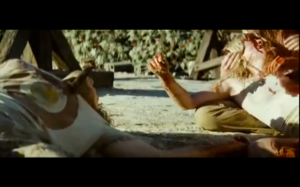 All in all, not a bad little film. My biggest complaint is probably that there was never a definitive climax, it was fairly even keeled in the second and third acts, minus a small lull in attention I mentioned earlier. The ending wasn’t terribly exciting, and the small ‘twist’ predictable. It definitely had it’s squeamish moments though, and at times was decently suspenseful or scary. So, not a bad second choice film. If I had to settle on watching something, I’m glad it was this movie.

Side note: The movie concludes with a song by the Yeah Yeah Yeahs, so, I automatically like it a little better. Also, it has Shawn Ashmore! Of The Following fame!