Just in case you still haven’t seen Die Hard. Also, I reviewed the (first) “Die Hard in the White House” movie back in March. 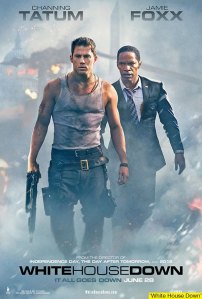 The Plot: Cale Vente Latte (Channing Tatum) is handsome and charming, but doesn’t really have his shit together or respect authority. He does have a daughter (Joey King), though, and she’s precocious and a huge fan of President James Sawyer (Jamie Foxx). Since his daughter kind of grew away from him while he was being a soldier in the Middle East, Cale’s decided that the only way to win her love is by becoming a Secret Service Agent. Why did I spend most of a paragraph talking about what’s clearly, like, half of the set-up for this movie? Because White House Down spends a lot of time on that stuff. But hold on, dear reader, there’s still more plot to go!

More Plot: President Sawyer wants to Make a Difference, so he decides to pull all of America’s troops out of the Middle East. This makes the Gun Industry unhappy, and they’re somehow involved in hiring terrorists to take the WHITE HOUSE DOWN, I guess? You never see any Gun Industry people, but they’re mentioned a few times. Anyway, James Woods is the head of the Secret Service, but he’s the bad guy. Jason Clarke is this Die Hard’s burly German terrorist who wants to avenge the death of his comrade when the hero kills him. He’s not German, though. Long story short, Cale ends up having to protect the President from terrorists, and they have kind of a buddy action duo thing going. Together, and with a little help from Cale’s daughter and Maggie Gyllenhaal and kind of the ghost of Abraham Lincoln (but not literally), they SAVE AMERICA and stop the bad guys from BLOWING UP THE MIDDLE EAST.

This is a Roland Emmerich movie. That should tell you everything you need to know, but I’ll keep going just in case. Also, it would be super lame if my entire review was just those six words.

A little background: Roland Emmerich makes big, stupid disaster movies. There may be some sophomoric political commentary and perfunctory attempts at character development, but there will, above all, be ‘splosions. He made Independence Day, and it all kind of went downhill from there. I will always have a place in my heart for his Godzilla, although it’s not a Godzilla movie and I’ll fight any man who says otherwise. The Patriot was all manufactured patriotism and forced melodrama—think Braveheart, but even more full of itself. The Day After Tomorrow was a humorless slog, and even John Cusack, Woody Harrelson, and Chiwetel Ejiofor (I totes spelled his name right on the first try) couldn’t save 2012.

By the way, Chiwetel Ejiofor is this guy.

So the trend here is that Roland Emmerich’s blockbusters have gotten less…fun. You could argue that this is true of blockbusters in general—just look at the faux seriousness and smug stupidity of Stark Trek Into Darkness or Man of Steel’s ridiculous civilian body count—but it’s even worse when fun blockbusters are the foundation of the director’s whole career. To be fair, White House Down is much better than Roland’s last two movies. It’s not godawful—it’s just meh.

The film does benefit some from solid performances. Even if the script doesn’t really commit, the actors do. Well, they try.

Channing Tatum is as charismatic and lovable as ever. While Cale is, unsurprisingly, given only the most basic character development, Tatum’s presence is enough to get us at least sort of involved. He and Jamie Foxx have good chemistry, but their back-and-forth is about as undercooked as everything else. Both actors—Tatum especially, if you hadn’t noticed—have a flair for comedy, and good delivery manages to revive more than a few of the film’s lamer quips.

Just a couple of best buds, hangin’ out.

They kind of go for a likeable everyman thing with Cale, and while Chay-Tay delivers, the film doesn’t. The script tries, but the character stuff feels like more of a chore than a vital part of the film. It doesn’t help that the fight scenes make that classic action movie mistake of treating the characters like they’re indestructible. Most of the fights are just beefy dudes shooting big guns or tackling each other through windows and furniture. As a self-proclaimed connoisseur of action violence, I was left more than a little underwhelmed. If you’re going for a relatable action hero, go for it. John McClane takes a lot of damage in Die Hard. He gets tired, he gets discouraged, but he’s a decent guy with a job to do, and we actually care about whether or not he succeeds. Cale is likeable enough, but we never feel like he—or anyone else, for that matter—is in any real danger. Yeah, this is basically a disaster movie playing action hero dress up, but if you’re going to cut corners when it comes to character depth, then at least make the fights look cool. Olympus Has Fallen, silly 90s-throwback that it was, still managed to get that part right. The R-rating didn’t hurt, but if there’s one lesson I learned from a youth spent watching Jackie Chan movies, it’s that you can have totally sweet-ass fights without going into explicitly grown up territory.

I would marry this fight if I could.

Unfortunately, those problems extend to every facet of the movie. The cast is all fine, but the characters are forgettable. People like Maggie Gyllenhaal and James Woods aren’t given much to do, which would have been fine if the script had at least traded depth for wit. All the time dedicated to set-up at the beginning doesn’t mean anything because there’s no real emotional payoff later on. Worse, there’s a total lack of economy in writer Vanderbilt’s storytelling. The film takes so long establishing the characters and then adding unnecessary twists and turns to the plot that it just feels bloated. White House Down is a little over two hours long, feels like two-and-a-half, and probably should have been one-and-a-half.

There’s nothing here that we haven’t seen before, and while that’s not always a bad thing, White House Down takes no real pleasure from running the gamut of action movie clichés. Ultimately, it’s neither the Die Hard nor the buddy action comedy it wants to be, and I’m not sure how many points it should get for trying. If you need to see a Channing Tatum action movie this weekend, just hunt down a copy of 21 Jump Street, because that’s a buddy action comedy done right. If you’re in the DC Metro area, go to Potomac Video and rent all of the Channing Tatum movies.

And if you want to see James Woods in something, just watch this:

One thought on “Rooster Illusion: That (second) ‘Die Hard in the White House’ Movie”