It’s Memorial Day Weekend! A time to forget why we have Monday off and go to the movies to watch Star Trek Into Darkness and Fast and the Furious 6. What does that opening imply? Perhaps that I’m looking back into cinematic history to honor our troops. Or maybe I’m just being obnoxious, and yes, I am going to review a blockbuster. Actually, none of the above. Here at Rooster Illusion, we’re pretty bad at acknowledging holidays that aren’t Halloween and Christmas. Why fight it? 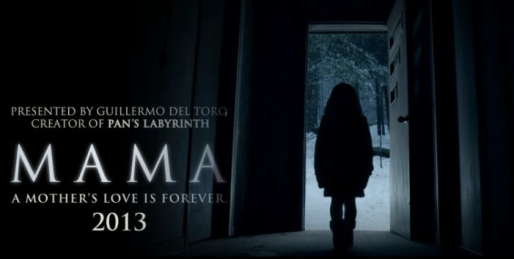 The Plot: Annabel (Jessica Chastain) lives with her boyfriend Lucas (Nikolaj Coster-Waldau). They’re pretty happy. She plays bass in a rock band; he draws pictures for a living…he’s also spent the last six years obsessively scanning the nearby wilderness for his two missing nieces. To everyone’s great shock and surprise, the girls are one day located. Having spent the last few years alone in the woods, they are both pretty feral, but Lucas and Annabel take them in anyway. The question on everyone’s mind is, how did they survive out there? The answer: they weren’t alone.

Right from the opening sequence, we can tell that Mama is going to be a cut above its peers. At its heart, it’s a straightforward ghost story. ‘Twas a ghost in the woods that looked after the children all those years and became known to them as Mama. Ghosts, by and large, are a cranky breed, and whatever benevolence they harbor may be strained if you take away the one thing that humanizes them. So, Mama follows the children to their new home and some creepy stuff happens. This isn’t going to be too run-of-the-mill, though. The first few minutes of the film establish that Mama loves the children and isn’t going to do anything to harm them, which is nice, because children in peril is no fun for anyone. Mama gradually becomes a threat to the adults in the film, especially Annabel as she adapts to maternity and learns to love the girls, thereby replacing Mama. It takes probably about forty minutes to an hour, though, before Mama starts hurting people. 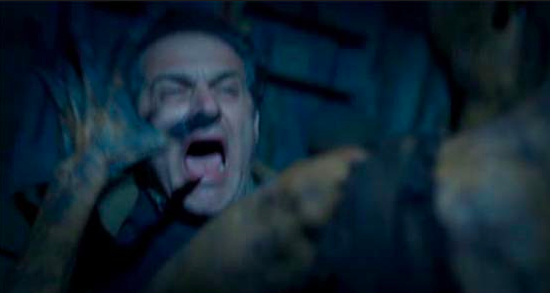 Universal Pictures
After that, though, all bets are off.

So, here we have a horror movie without a sense of threat. Remarkably, though, the first half of the film is much scarier and just generally better than the second half, once Mama starts doin’ mean stuff. Scary is the wrong word, actually, because it’s a difficult tone to achieve without danger. Mama is creepy. That’s a better adjective. There’s just something off about the whole thing from the start.

First of all, feral children give me the heebie-jeebies. That existence is an uncomfortable balance of innocence and savagery. It’s like if you ever watched your loveable, playful golden retriever mercilessly slaughter and then play with a family of bunnies. The children lack a concept of civilization except that which they learned by ages three and one, and that which they picked up from their GHOST MAMA. Yeah. So, when they do wrong, or witness wrong being done, they do it with a clean conscience. It’s creepy. 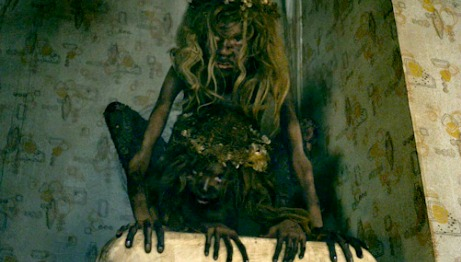 Universal Pictures
Like, severe heebie-jeebies. I would not be okay with finding this.

Second of all, ghost. Ghosts are pretty much always creepy, even when they’re being nice. It’s one thing when the ghost is chillin’ in the woods, but director Andrés Muschietti created a real sense of invasion once the ghost enters the new house. You know she’s there, but you seldom know where. There are a lot of nice tricks when you’ll see one of the girls playing with someone and then the only other character around walks down the adjacent hallway. Again, there’s not really a threat, but there is clearly something wrong or out of place. You can tell a good horror director by how minimalist and restrained his/her scares are. If he/she is truly talented, all it takes to send shivers down your spine is an open door or a misplaced toy. There are plenty of those.

Aside from these script/directorial elements, the other thing that sets Mama above the rest is the quality of its performances. When I say that, I’m mostly just referring the Jessica Chastain. The other actors are good, but Chastain has the biggest part and presence. She’s one of those rare people who treats every role like it could be career-defining and Oscar-winning. Never gives less than one hundred percent, all characters are equal, etc. Mama will not be winning any awards, and a lesser actress would have fumbled through the production, collected her paycheck, and saved her chops for a movie getting released in November. Not Jessica Chastain. Examining the script alone, Annabel has a good character arc, but is ultimately kind of a bland, standard (or blandard, if you will) Horror Movie Heroine. Mostly, she just has to be present while spooky things happen until she eventually figures it out. Chastain takes this archetype to new heights. We really get a sense of Annabel as a person, and we are amazed with how well she’s coping with her situation. 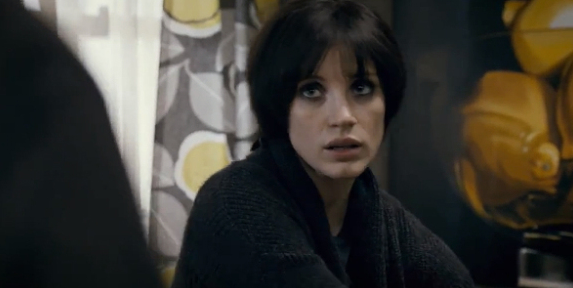 Universal Pictures
And pulling off that haircut.

So wow, at this point it sounds like I all but loved Mama. Surely enough, I was pretty much loving it as I watched it, right up until the end. A regular pitfall for horror movies is the final half hour. Countless films rock the buildup only to fall apart completely in the final act. Once the monster is revealed on screen, the scares become more physical and less atmospheric, and the writers lazily stumble into either a quick fix or a cheap twist, or often both. Mama isn’t quite that bad, but it does lose its sense of mystery and discomfort the more we see the ghost. Oh, and about the ending… I try to keep Second Breakfast a spoiler free zone, so we’ll have nothing of the sort here, but I will say this: Mama wrapped everything up beautifully with a satisfying, logical ending that fit perfectly in line with everything I learned about ghosts from Supernatural, but then it completely disregarded its own resolution! It wasn’t one of those horrible cheap twists like at the end of The Ring or Insidious, because after the initial backtrack it does have a second resolution. The new one just doesn’t make any sense and isn’t nearly as satisfying. So yeah, like so many horror movies before it, Mama just couldn’t pull off its ending. It was a disappointing way to end the seven-hour flight on which I watched it.

I can still recommend it, though, if you’re in the mood for a solid and not too scary horror movie with excellent performances. Good for a rainy day… or night if you want to be more atmospheric.