Hollywood is full of charming men; it always has been, and hopefully it always will be. You’ve got Cary Grant, Gregory Peck, George Clooney, Hugh Jackman, Paul Newman, Nathan Fillion, Will Smith, Joseph Gordon-Levitt, Jean Dujardin, Ewan McGregor, Clark Gable, everyone who’s ever played James Bond… LL Cool J, I guess. The list goes on! Round about now you might find yourself wondering, but who is inarguably the most charming man to ever grace the silver screen? I know it’s a bold statement, to name anyone most/best                         , but I’m going to do it. Ladies and gentlemen: charm incarnate, Errol Flynn.

Ah, but I’m not writing today just to tell you how handsome and charming Errol Flynn is; I’m here to bring you a double feature! 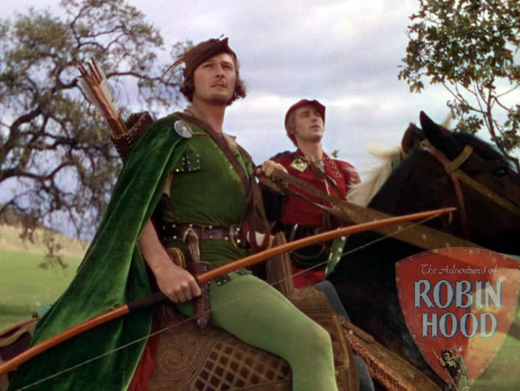 The Plot: Robin Hood (Errol Flynn) organizes a band of merry men in resistance against the oppressive Prince John (Claude Rains) and his chief enforcer, Sir Guy of Gisbourne (Basil Rathbone). With the aid of Will Scarlett (Patrick Knowles), Friar Tuck (Eugene Pallette), Little John (Alan Hale), and the beautiful and clever Maid Marion (Olivia de Havilland), Robin just might be able to rob from the rich, give to the poor, and make England safe for the return of the rightful king, Richard the Lionheart (Ian Hunter).

So. This is one of my favorite movies ever of all time. I probably saw it first when I was three years old, and together with Star Wars and Batman, it shaped my childhood until The Lord of the Rings came out. I recently had the rare and distinct pleasure of seeing it on the big screen for the first time.

Well, you know how sometimes movies you loved as a kid just aren’t as good when you re-watch them? Like, say, hypothetically Kings of the Sun, maybe, mom? Well, that’s not the case for The Adventures of Robin Hood. I loved this movie upon my first viewing, and my enjoyment of it has not diminished in the slightest over the last couple decades. It’s a straightforward movie: good guys, bad guys, swordfights, speeches, etc. The good guys are good and the bad guys are bad. There’s not a whole lot of moral ambiguity, here. That having been said, I realized upon this most recent viewing that this movie just has one of the best scripts ever. I can’t think of a movie with wittier dialogue. It’s right up there with The Princess Bride and Charade. Every character is well written. Even the bad guys! Sir Guy and Prince John have some wonderful lines. Even Maid Marion! Think about that. Most female leads are horribly underwritten, especially in Robin Hood movies. Of course, the best lines are reserved for the main man himself.

Robin: Fluently [everyone in the room swoons].

Furthermore, this movie has the greatest swordfight of all time. I’m not going to link the video, because that would spoil the climax of the film, and you really have to just watch it the whole way through yourself. Partnered with this, an Oscar-winning soundtrack, superb direction from Michael Curtiz (Casablanca, White Christmas, Mildred Pierce), the aforementioned wonderful script and supporting cast, and the most hearty laughs you’ve ever heard in a two-hour span, Errol Flynn is the absolute epitome of charming, and I’m not going to lie, I still kind of want to be Robin Hood when I grow up.

The Plot: Hotshot flyboys Courtney (Errol Flynn) and Scott (David Niven) compete to see who’s top gun, whilst simultaneously contending with the ornery Major Brand (Basil Rathbone). Ha ha, no. Courtney and Scott are hotshot flyboys, but this film is set during WWI. Major Brand is ornery, but only because he’s a chronic alcoholic who’s been crushed by the responsibility of sending eager schoolboys on suicide missions, and they’re not contending with anything but the bitter truths of mortality and war.

The Dawn Patrol is a war movie, but unlike so many war movies, it draws its power from what isn’t shown. There are very few scenes of combat; most of the film takes place in the security of the airbase. So where’s the danger? Where’s the drama? Brand maintains a chalkboard with the names of all the pilots, how many hours they’ve flown, what missions they’re on, etc. Characters go away on missions and never come back, and someone quietly erases their name from the board. It’s dreadfully quiet and somber, and all the more hard-hitting than actually seeing them get shot down. People just sit anxiously around the base, listening for the engines and counting how many come in at the end of the day.

Warner Bros.
And then everyone is really sad.

To add to the effect, everyone’s constantly making weak attempts to lighten the mood. Courtney and Scott are best friends and they fool around a lot. On the surface, it appears that they’re just naïve and jovial, and perhaps they don’t full grasp the severity of the war, but after a point you realize that they act like this because their only other choice to become a distant, bitter alcoholic like Brand. Phipps (the wonderful Donald Crisp) is Major Brand’s assistant. He spends the entire movie trying to get through to the utterly shattered Brand. In one great scene Phipps proposes they get a dog for the base and describes in detail what it would be like, he even pretends to play with the dog, but Brand just isn’t there.

20th Century Fox/Universal Studios
I can’t imagine this man as an alienating figure. Can you?

Getting back on topic, though, Errol Flynn gives one of his best dramatic performances in this film. Here he imbeds all of that subtle, underlying anguish beneath his outward charm and charisma, proving that he’s not just a handsome face and a gentle voice, but a truly great actor.

So, look outside. Is it nice out? Maybe go for a walk. Is it crappy out? Read a book or watch a movie. Suggestions? If you want my number one feel-good movie of all time, watch The Adventures of Robin Hood. If you want to feel sad and quiet, watch The Dawn Patrol. Both are great films, and both allow you to bask in the wonderful presence of Errol Flynn for a couple of hours.