Oscar nominations are out. I’m not actually going to talk about them at all, though. Instead, my winter vacation is finally wrapping up, classes start tomorrow, and I’ve relocated to a brand new backdrop, where my exciting adventures will likely only get more exciting. That’s right, Second Breakfast is publishing from the most rockin’ place on earth: London, England. And I can think of no better way to introduce myself to London, than to review an American movie that takes place entirely in Rome. 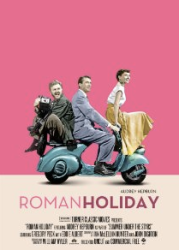 The Plot: Ann (Audrey Hepburn) is the spoiled princess of an anonymous European nation. She’s just landed in Rome as the final stop on her goodwill tour of the continent, and she has had it. She’s sick of shaking hands, sick of waving, sick of being pampered, etc. So, like any rational person, she has a temper tantrum. To calm her down, her doctor gives her some liquid sleep, but she sneaks out onto the town anyway… only to fall asleep on a bench. Enter Joe Bradley (Gregory Peck), a savvy American reporter and general Good Guy. Worried for Ann’s wellbeing, Bradley takes her home and allows her to sleep on his couch. Shortly thereafter, he realizes that this is indeed the Princess of… some anonymous European country, and that he has the chance of a lifetime to get an exclusive interview. He convinces her to take the day to enjoy Rome, they both lie about their identities, the Secret Service gets involved, and romance blooms. 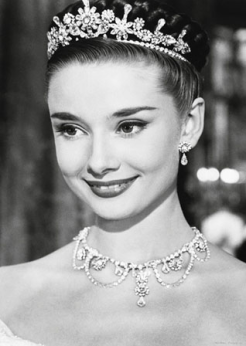 Ah, Audrey Hepburn. Would you just look at that face? That is the face of Belgian excellence. It should be on their flag, possibly eating some waffles. Hepburn was twenty-four years old when Roman Holiday came out, and she (rightfully) won an Academy Award for her performance. It’s not her best role, and not the one for which she most deserved to win (see Breakfast at Tiffany’s); it’s not a great dramatic achievement, but there’s a certain air about her in this film that makes the act of giving her an award simply irresistible. Did I mention before that this was her first starring role? Well, it was. She got the whole “And Introducing Audrey Hepburn” line in the opening credits. As some of you may well know, that line traditionally comes at the end of the credits. An introductory performance never gets top billing, regardless of how big the role is. In this film, though, Audrey Hepburn’s name comes up second. Why? Because Gregory Peck loved working with her so much he said that it should, and director William Wyler agreed. 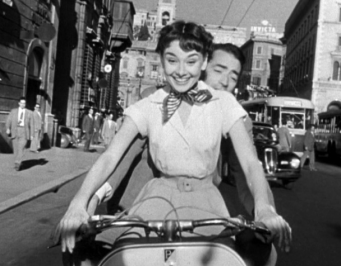 Besides from the wonderful chemistry between Peck and Hepburn, the things that really make Roman Holiday are the script and the direction. What I’m about to say about this film is similar to what a lot of people have been saying about the recent Silver Linings Playbook. It’s a romcom that is treated like an artistic film. The script is smart, original, witty, and meaningful. That’s miraculous in and of itself, but even more so is the fact that both the director and the actors actually understandd the script. Again, take Silver Linings Playbook as a recent reference point. That film’s been nominated for all four acting categories at the Oscars. The actors read their characters, understood that they were more complex than your standard romcom archetypes, and really delved into things. The same thing happens in Roman Holiday, and not just with Audrey Hepburn. Gregory Peck, who we all know is a brilliant actor (see To Kill a Mockingbird and The Man in the Grey Flannel Suit), brings the same quality to his performance here as in all films. The rest of the ensemble rounds things out beautifully with a balance of comedy and real emotion. There’s some poignant stuff near the end of the film.

As I mentioned, though, the other thing that really makes the film is the direction. Let us once again turn to Silver Linings Playbook, directed by David O. Russell, who had previously directed, among other thing, Three Kings and The Fighter, which is a pretty heavy movie. He directs Silver Linings Playbook with the same intensity that he brought to The Fighter, without hindering the comedy. William Wyler (who really is one of the great American filmmakers) is also famous for directing such heavy movies as The Heiress, The Best Years of Our Lives, and Ben-Hur. Wyler knew his craft. He knew the difference between a good movie and a bad movie, and understood how much of that difference depended on the competence of the director. As a director, he was capable of conveying deep, personal conflicts on both an epic scale (Ben-Hur) and an internal scale (The Best Years of Our Lives), and he made those conflicts stick regardless. Roman Holiday is the same deal. What’s important in this film is the same thing that’s important in all those other films (including Silver Linings Playbook); it’s not the comedy or commentary or action or the romance; it’s the people. AND SO IT SHOULD BE WITH ALL MOVIES. I find myself making this point a lot. I made it in my review of Beasts of the Southern Wild. I said the same thing in my review of The Hobbit. I probably hinted at it in my reviews of Life of Pi, Les Misérables, Looper, and… well, actually probably not Predator 2, but never mind. 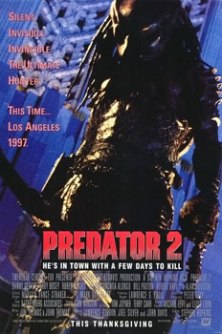 20th Century Fox
In town with a few days to kill? Get it? That’s not all he’ll be killing! Oh, we’re so clever.

The comedy in this film is spot on, just like everything else. Not only are the script witty and the situations humorous, but they are complimented with some invented and often subtle visual gags. There, that was a short paragraph. Moving on…

The thing that really puts the metaphorical icing on the proverbial cake, though, is the ending. I’m not going to spoil anything, because I’m not that bad a person, but I will say this: they nailed their perfect ending. I was afraid, too, because so many movies overshoot their perfect endings by five or ten minutes (see Taxi Driver) or half an hour (see The Return of the King), and that can often prove detrimental. Through the final minutes of the film I was worried that Roman Holiday would screw up, but it doesn’t. It ends precisely when it should. Hallelujah, amen, etc.

If you need a good, lighthearted, well crafted, Audrey Hepburn-ed, romantic pick-me-up, then I absolutely and highly recommend Roman Holiday. If you don’t like it, then don’t blame me; it’s your own fault for sucking.