Well, it looks like Rooster Illusion is finally getting into the Christmas spirit. Although, when you think about it, it’s kind of like we’ve been in the Christmas spirit this whole time, what with all the free reviews and such. It’s the gift that keeps on giving. 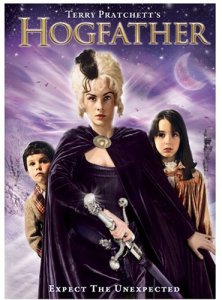 The Plot: When the Hogfather (Shend) goes missing on the night before Hogswatch (Discworld’s version of Christmas), Death (Ian Richardson) begins investigating. He suspects foul play by the Auditors of Everything, who want to eradicate all irregularities from the universe. Irregularities like humans, of which Death has become rather fond. He decides to take up the Hogfather’s mantle, and “forbids” his slightly supernatural granddaughter Susan (Michelle Dockery) from looking into the Jolly Fat Man’s disappearance. As Death learns the true meaning of Hogswatch, Susan’s investigation takes her to the Unseen University, home of Discworld’s foremost wizards, and eventually to the Tooth Fairy’s castle. Magic and mayhem abound, with the added bonus of a very thoughtful examination of the ways that belief eases our relationship to reality. Will Susan save the Hogfather? What role does the creepy assassin Mr. Teatime (Marc Warren) play in all this? Will Death ever get the hang of “Ho, ho, ho”?

Hogfather is an adaption of a Terry Pratchett book of the same name. Terry Pratchett, for those not in the know, is a prolific English author, best known for Discworld, his ongoing comedic fantasy series of novels. The Discworld universe is beautifully complex, mirroring themes and events from literature and history, yet always functioning as a unique world with its own internal logic. Though these parallels are often simple, they are always grounded by clever insight and complex, well-crafted characters. In case you can’t tell, I am pretty into this stuff.

Discworld is a flat, circular planet perched on the backs of four elephants riding through space on the back of a giant sea turtle. Not surprisingly, Discworld is full of magic. It’s populated by witches, wizards, cops, philosophers, politicians, assassins, barbarians, vampires, werewolves, dwarves, Gods, Anthropomorphized Personifications, and one orangutan librarian.

RHI Entertainment
The turtle is called the Great A’Tuin, if you were curious.

At the moment, there are 39 Discworld books. I have read 38 of them, some more than once. I started reading Terry Pratchett when I was in eighth grade. So…I guess I was between thirteen and fourteen years old. Those books made being a shy, awkward teenager a lot easier. In fact, Pratchett’s writing had a huge influence on not only my own writing—teenagers are impressionable—but also on my sense of humor. Rather, it appealed to my sense of humor, but helped develop my wit. And as my twelve dedicated readers will know, it is now razor-sharp, if only the size of a penknife.

But enough personal history. On to the meaty bits.

Hogfather is a rather literal adaptation. Its goal is to take images and dialogue from the book and put them on the screen as accurately as possible. Some of Pratchett’s humor is there, but the film feels too restrained, like it’s trying very hard to please everyone at once. The set design is spot-on, and the costume department gets some serious high-fives, but the characters lack vitality. This is in part due to weirdly subdued performances all around. Michelle Dockery’s Tough and Sensible Governess character comes across as more than a little disinterested, while Ian Richardson’s delivery of Death’s lines lacks, for the most part, a good sense of comedic timing. Since Pratchett’s Death is one of my all-time favorite characters ever, this is something of a shame.

RHI Entertainment
He even likes cats.

I guess we’re in familiar territory, now. Alex talked about this yesterday in his review of The Perks of Being a Wallflower, with some excellent observations on fidelity in adaptations. It’s something that we’re all pretty familiar with. Why isn’t Captain America as badass in The Avengers as he is in the comics? Why do most of the Harry Potter movies feel like checklists? Where’s Alfred’s mustache? Personally, I think that the best adaptations are the ones that don’t try to be entirely faithful, that add something new instead of struggling to recreate everything that’s described in the book.

Perhaps I’m being unfair, since I’m such a fan of the novel. Maybe casual viewers will find the characters as vibrant as they’re supposed to be, but I doubt it. Sadly, I have the feeling that much of Hogfather’s charm comes from the viewer’s familiarity to the book. It isn’t rushed—it’s actually two 90-ish minute episodes, instead of one movie—but maybe it should have taken a little less time. Capturing the look of Discworld is a nice plus, but it isn’t enough. By the end of the second episode, Hogfather has started to feel like it’s running through the motions. As much as I love Pratchett’s books, I don’t want to see literal recreations of them. The best tribute to his work would be to create something equally alive, even if you had to fudge the details.

But that’s not to say that this mini-series isn’t worth watching. While Hogfather does trip itself up by being a little too faithful to the source material, it’s an enjoyable—and highly inventive, if this is your first trip to Discworld—fantasy story. It’s often very funny; one of the benefits of following the book so closely is that the script preserves some of Pratchett’s dry wit. If you’re looking for a good way to get into the holiday spirit without getting too sappy just yet, then pour yourself a glass of sherry, settle down under some blankets, and have a Happy Hogswatch. 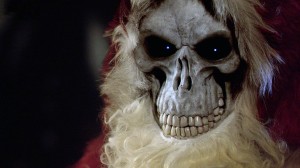