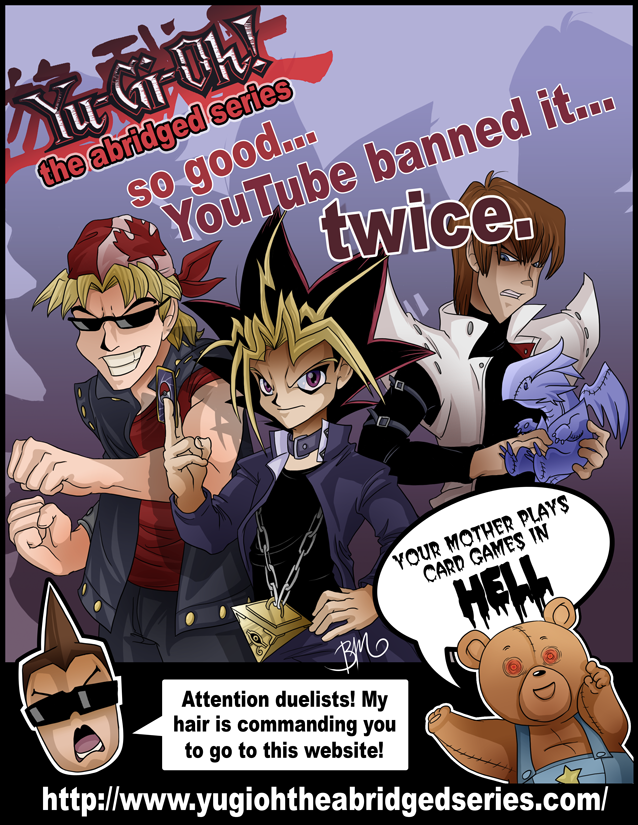 If it has not been taken off of YouTube again for copyright reasons, the above video is, as you can see, not from the actual Yu-Gi-Oh! television show. Instead, it is from a fan-made creation known as Yu-Gi-Oh The Abridged Series. The Abridged Series was brought to the internet by Martin Billany, who goes by “LittleKuriboh,” and is a parody of the anime franchise. Though it lampoons the series as a whole, it actually does a fairly accurate job of “abridging” the show, like the title suggests. For those of you unfamiliar with the cartoon, it is about a boy named Yugi who is a host to a spirit of an ancient Egyptian pharaoh, and must save the world with his friends by playing a “children’s card game” known as Duel Monsters. The series is part of a larger franchise which sells actual Duel Monsters cards similar to those portrayed in the cartoon. The Abridged Series embraces the ridiculousness of such a premise and a large part of the humor is the apparent seriousness with which the game is played in the show itself. At the same time it ramps up the character’s original personalities to 11, constantly rips the fourth wall to shreds, and makes villains out of the very company that is responsible for bringing Yu-Gi-Oh! to an English speaking audience.

One of the things I greatly applaud The Abridged Series for is the amount of thought that goes into making it, and the knowledge that the creator has about the show’s Japanese origins. Many reading this article may be familiar with the English adaptation of Yu-Gi-Oh! and perhaps grew up with it, but few may know that Yu-Gi-Oh! wasn’t even supposed to be about Duel Monsters. In fact, the writer of the original Yu-Gi-Oh! comic, Kazuki Takahashi, simply meant the series to involve many different types of games, and the first FIVE VOLUMES only had TWO instances of the card game we now know as “Duel Monsters”. The comic also covered some pretty heavy topics including bullying, gang violence, and abuse. However, through the many animated adaptations of the series, and with an increase in censorship with each adaptation, the Yu-Gi-Oh! we got in English was a poor shadow of its original self. The Abridged Series, however does an excellent job of throwing hints and references to Yu-Gi-Oh!‘s printed origins. It specifically points out the areas of censorship, and even makes the characters almost more accurate to their original selves, despite them being more exaggerated. For example, in the English version, the main characters’ motives and personalities are sugar-coated and they are without a doubt “the good guys”. In the Japanese version, and especially in the original comic, many of the characters have a certain amount of moral ambiguity. The pharaoh inhabiting Yugi’s body is especially portrayed as a rather dark and sadistic character. I like looking at just the opening sequence of the first episode of both the Japanese and English version, to note this stark difference:

The history of games can be traced back all the way to Ancient Egypt 5,000 years ago. These ancient games were used to decide the fate of citizens and their kings. They were called the “Shadow Games”. In the present, a boy appeared who solved the Millennium Puzzle and inherited the Shadow Games. A boy with two souls – one light and one dark – who is referred to as the King of Games

Long ago, when the pyramids were still young, Egyptian kings played a game of great and terrible power. But these “Shadow Games” erupted into a war that threatened to destroy the entire world, until a brave and powerful pharaoh locked the magic away imprisoning it within the mystical Millennium Items. Now 5,000 years later, a boy named Yugi unlocks the secret of the Millennium Puzzle. He is infused with ancient magical energies, for destiny has chosen him to defend the world from the return of the Shadow Games, just as the brave Pharaoh did 5,000 years ago.

The Japanese version is obviously a lot more morally ambiguous about a boy with a dark and light version of himself. The English version is your more generic “chosen one”, world saving hero. This is how our dark pharaoh from the comic who would gleefully send people to their dooms in a Shadow Game, became a “brave and powerful” pharaoh who is going to “defend the world” from them. The Abridged Series pharaoh, and many of the other characters, strangely goes back to that darker personality. Part of the humor of The Abridged Series is that most of the characters involved are portrayed as jerks. They are rude, selfish, or flawed in some way, and in many episodes it’s more of a contest to see who can be more of an asshole. Despite this being done more purely for comedy, I see it as decidedly more accurate to the original comic characterizations than the sugar-coated versions of them that we get in the the English dub, or even in the Japanese anime.

This changing of dialogue and characters is unfortunately quite a common fate for many foreign cartoons that come to the US. Americanization or westernization is often forced upon them in their translation. Shows will often have characters names changed to a more western name, any violence or mature themes will be reduced, and any reference to the show’s original culture will be glossed over with something more familiar to an English-speaking audience. This often leads to entire scenes being taken out, characters’ personalities being changed, musical scores being replaced with something more “hip”, or even entire plot-lines dropped. This problem is especially prevalent in Japanese animation, and perhaps one of the best examples of this is Yu-Gi-Oh!, which has been subjected to all of the above changes in its English translation. A large portion of The Abridged Series is dedicated to mocking  this issue by making fun of specifically the English dub of the anime. The Abridged Series does so in a number of ways. Secondary character, Joey Wheeler (Katsuya Jonouchi in the Japanese version) is given an even more over-the-top Brooklyn accent than his English dubbed voice. The villain’s thugs often attack the characters with “invisible guns,” which points out the fact that most of the images of guns are edited out in the English version. Sometimes The Abridged Series even purposefully adds in the dubbed dialogue at certain moments to punctuate the stupidity of certain lines.

In the fourth-wall-breaking fashion of Yu-Gi-Oh! Abridged, the goal of the evil 4Kids executive board characters was to get The Abridged Series cancelled. This “goal” bled over into real life due to The Abridged Series‘ tendency to actually get cancelled due to the series being flagged for copyright violations. LittleKuriboh’s YouTube account was taken down numerous times because of these lovely little parodies. However, both LittleKuriboh and fans of the series continued to make new accounts to display the videos. For a time, The Abridged Series even changed its name to “The Cancelled Series” to reflect the numerous flagging attempts. There were even parts of episodes that added humorous jabs targeted at those who have tried to get the series taken down. In the 50th episode, entitled “Joey Wheeler Ace Attorney” (start viewing around 06:40), Joey is put on trial by a judge from 4Kids Entertainment for copyright infringement. Joey defends this claim in the most meta way possible:

Maybe we have committed copyright infringement, but you got to know we’ve done everything in our power to support the Yu-Gi-Oh! franchise. And if it weren’t for us, I don’t think the show would be nearly as strong as it is right now… There are more Yu-Gi-Oh! fans now than ever before. And the more you try to stifle our creativity, the more we’ll try to express our love for a show about more than just children’s card games. Its about fighting for what you believe in and I believe in this show and its fans now more than ever, because they believe in me.

Though a common argument against copyright-fueled censorship, it is a wonderful insert into the series that is clever, funny, and very aware of itself and its audience. And that’s exactly what good comedy, and good writing in general, consists of! This is the brand of humor that The Abridged Series is steeped in. In the end our heroes defeat the 4Kids executive board and banish them forever!

In a truly ironic twist of poetic justice, 4Kids Entertainment was actually shut down in real life, and due to Yu-Gi-Oh! no less! It started when 4Kids Entertainment entered agreements with other companies regarding the Yu-Gi-Oh! franchise, allowing them to collect royalties without paying a portion of those royalties to the original Japanese television station, TV Tokyo. This was a breach of 4Kids’ contract with TV Tokyo, and thus they were sued by the station and the distributing company Nihon Ad Systems (NAS). The subsequent lawsuit caused 4Kids Entertainment to declare bankruptcy, and eventually led to them having to sell their rights to Yu-Gi-Oh! as well as other cartoons that they had a part in. The rest of the company was eventually broken apart and 4Kids Entertainment, as a cartoon dubbing and distribution company, ceased to be!

So, essentially, the company that distributed and dubbed Yu-Gi-Oh!, who were the villains in The Abridged Series, which was taken down for weak cases of copyright infringement, ended up being shut down in real life due to their very real violation of contract involving that very same TV show. Life is so strange, isn’t it?

Yu-Gi-Oh! The Abridged Series has been running for nearly 10 years now, and unlike most other adaptations of the Yu-Gi-Oh! franchise, I highly recommend it! Its arc in internet history is an interesting one, and I applaud the creator, LittleKuriboh, for continuing his work despite the flack it gets. It’s a fun viewing, even if you don’t know anything about the original show. And if you are familiar with the series, you can enjoy the little hints and references that are thrown your way. It’s one of the few adaptations of the manga that gets it almost right and actually makes you want to go back and learn more about it. So go onto YouTube or the Yu-Gi-Oh! Abridged website and watch it now! That is if it hasn’t been taken down again…

* Note: I purposefully added only fan-created videos and images in this article, but to avoid copyright infringement myself: Credit for the artwork shown here belong to the original artists (who’s names I could not find online). Yu-Gi-Oh! The Abridged Series belongs to LittleKuriboh. Yu-Gi-Oh! the anime is brought to us by Studio Gallop and NAS, but is licensed by 4Kids Entertainment (formerly) and 4K Media Inc. (presently) in North America. Credit for the original comic and concept goes to Kazuki Takahashi. There, I think I’ve got all my bases covered. No copyright infringement here!

2 thoughts on “Saturday Morning Cartoons: Yu-Gi-Oh! The Abridged Series, and how 4Kids was Defeated by a Children’s Card Game”